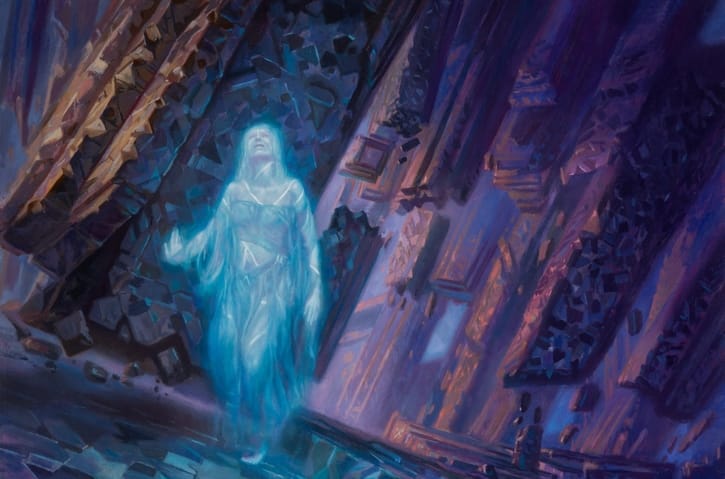 Are you looking for new Standard decks to play after Omnath ban? That’s great, as we have 14 post Omanth ban decklists for you to try.

Decklists come from various streamers, so if you like a deck, don’t forget to check the streamer’s Twitch or YouTube channel by clicking on their name (next to played by).

Each decklist opens in a separate tab, as the loading speed goes way up when we put multiple decklists in one article. When you open a decklist, you can copy it by clicking the Arena icon in the top right corner. Then import it to Arena by going to Decks section and click Import.

Even though Lucky Clover isn’t legal anymore, Adventure decks are still going strong. Here are two different decks that you might like.

First deck – Jund Adventures. Compared to the Red-green version you lose the speed of Embercleave, but you get more interaction with black cards like:

You also have plenty of card advantage. Of course, your Adventure cards are already two for ones, that get better with Edgewall Innkeeper, but you also have Radha, Heart of Keld and Elder Gargaroth.

Your top end is Garruk, Cursed Huntsman, which might finally see some play after these bans.

On the other hand, you can get more aggressive with a green-white deck. You still rely on Edgewall Innkeeper, but you’re playing the white equipment Maul of the Skyclaves. Sure, it isn’t Embercleave, but in some situations in might be even better. Just the fact that it isn’t legendary, comes up often enough.

In addition, you can easily protect your equipped creatures with Selfless Savior, while Seasoned Hallowblade already has a built-in protection.

Skyclave Apparition is a very useful creature from Zendikar Rising. Even if you remove a blocker only for a turn, that’s usually a big enough advantage to help you win the game. In case your opponent manages to get rid of it, they get just a vanilla creature back, which usually won’t matter much.

So if you’re looking for an Adventure Standard decklists after Omnath ban, you should definitely give this one a try.

Now that the broken cards are mostly gone, control might be playable again. If you’re looking for a control decklist, here are three different options.

Yorion control might be good enough to see play again. The deck has the usual package of cards like Omen of the Sea and Omen of the Sun, which are great to bounce with Yorion.

Do you want to cast Narset of the Ancient Way and Inspired Ultimatum? Look no further, as this is the perfect deck for you.

The deck features an interesting mix of removal and draw spells. You have enough removal to keep the board empty for turn 4 Narset pretty easily. If you manage to keep her safe for two turns, you can get to her ultimate, which adds a Shock to every card in your deck.

Are you perhaps a fan of Ashiok? You have a ton of removal and conterspells in this deck. It truly is a classic blue-black control deck.

Besides Ashiok, the deck also has three one-of planeswalkers:

All in all, it’s a great deck, especially if you get the destroy-40-creatures quest on Arena.

If you don’t have tons of wildcards to invest in your mana base, maybe a mono colored deck could come in handy.

This deck has a pretty nice interaction with the following three cards:

Play Vessel on turn one, and follow with the other two cards on the second turn. You’ll end up with a 5/5 flyer and you’ll get to draw two cards for your troubles. Not too shabby, particularly since all of these cards are good in this shell anyway.

The rest of the deck features some graveyard synergy cards like Call of the Death-Dweller and Lurrus of the Dream-Den. Furthermore, you still have some good stuff cards like Demonic Embrace, which will provide a ton of damage very quickly.

If you miss finishing games with Gray Merchant of Asphodel, you should surely try this deck.

Mono white aggro might be good again. Santos Vella actually managed to get Top 8 of a Redbull tournament when Omnath was still legal. So if the deck was playable back then, it’s surely at least a fine choice today.

Similar to the green-white Adventures deck, you rely on hard-to-deal-with creatures plus Maul of the Skyclaves.

Legion Angel is an interesting card from Zendikar Rising. This deck has two in main deck and two in sideboard. (Don’t forget to include two in sideboard, even if you’re playing best-of-one.) So first Angel you play draws you a second one, which draws you a third one, which… well, doesn’t draw you anything, but how many Angels do you need to win a game of Magic?

Here are some more decklists to try after the Omnath ban. They don’t have too much in common, except that they’re all all pretty reasonable choices to ladder with.

The cat out of the bag Standard format. Cauldron Familiar would naturally fit well in here, but sadly this 1/1 is too powerful for it’s own good.

Nevertheless, Food synergies might be strong again. Wicked Wolf was a powerhouse once before, and it might be its time to shine once again, now that a plethora of cards was banned.

You can get tons of card advantage with Trail of Crumbs and Korvold, Fae-Cursed King. Dragon can usually finish the game in one or two attacks if left unchecked.

Plenty of decks in Standard are also unprepared for the return of the combo with Claim the Firstborn plus a sacrifice outlet – Woe Strider or Witch’s Oven.

If you enjoyed this deck before, there’s no reason why you shouldn’t have fun with it again.

Blue-Black Rogues have evolved into this deck. You still have some tribal synergies, but you aren’t relying just on them. For starters, you have Ruin Crab, which can quickly start milling your opponents.

Probably the biggest addition to the deck since its inception is Into the Story. Sometimes your opponents could just one-for-one you and then overpower you with their card advantage. That’s not so easy when you have a four mana draw four to refill your hand.

However, the problem with decks like this one are decks that can use their graveyard, such as the next one.

A deck like this already wants to fill its graveyard. It does so with Mire Triton and Tymaret Calls the Dead. Why do you have to mill yourself?

So you can use your powerful escape cards – Kroxa, Titan of Death’s Hunger aka. Only Legal Titan and Ox of Agonas. Both of which can provide some serious value.

Besides that, the deck contains efficient removal and discard spells, which let you control the game. All in all, the deck packs enough power that you can expect a version of it to remain playable for quite some time.

There was a Streamer Early Access Event, one day before Zendikar Rising release. We already wrote about plenty of interesting Zendikar Rising decklists from that event. However, the prevalence of Omnath, Locus of Creation pushed them out of the metagame.

Some of those decks might actually become somewhat viable, now that the four color monster is gone. Here are three suggestions from the previous article, that might be fun to try again.

Nahiri’s first ability makes tokens that trigger Winota. Her second ability can find Winota or Embercleave. This equipment also works well an army of creatures that you can get from Winota. So you have three amazing mythics that work well with one another.

This deck tries to maximize all of the synergies they offer.

There are some pretty good creatures to get with Winota, like:

So if you want to try a new/old Winota deck, this one certainly looks fun.

Honestly, a deck built around the Forsaken Monument is still not very strong, even after the Omnath ban. However, is it totally different from most Standard decks? For sure.

This decklist doesn’t include a single colored card. Thanks to that you’ll have access to a bunch of colorless lands with abilities, which you can use for value.

So if you’re looking for a weird Standard deck, that could also win some games every now and then, you should probably at least try this one.

Will tribal Clerics become playable after the ban? They probably won’t be Tier 1 any time soon, but it might be a fine deck to finish your quests on Arena with.

Tribal synergies between Clerics are pretty good. With Vito, Thorn of the Dusk Rose they can become absurdly strong. So if you like a bunch of life gaining shenanigans and triggers, this can be the right deck for you.

Will blue-red spells be good again? That’s yet to be seen, however this decks certainly has some good stuff going for it.

First, you have Sea Gate Stormcaller, which does a good enough Snapcaster Mage impression. The second important Wizard is Magmatic Channeler. It can filter through your deck and become a 4/4 for two mana. Even in the world of power creep, this is still pretty useful.

The deck also features old favorites in Sprite Dragon and Stormwing Entity. If you enjoy this type of deck, you should definitely try it.

That’s it about Standard decklists after Omnath ban. If you have any of your own brews, feel free to share them in the comments below.

Until next time, have fun in this Omnath-less world with your new deck!