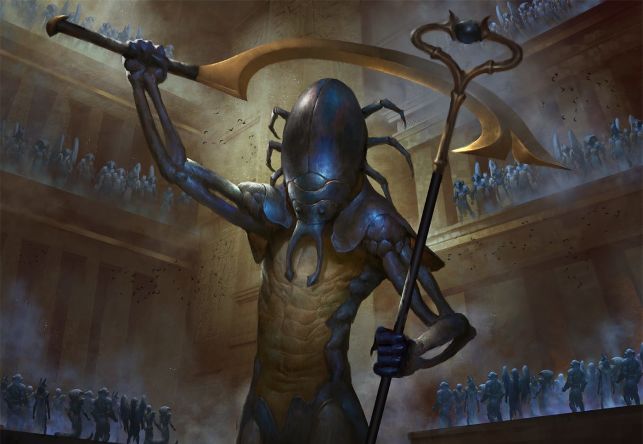 You can find a complete list of Amonkhet Remastered spoilers right here. The new MTG Arena-only set features cards from both Amonkhet and Hour of Devastation plus some special ones. Let’s find out which.

There are 339 cards in Amonkhet Remastered:

Let’s take a closer look at those cards.

Cards From Other Sets

There are 14 cards from other sets, which will be very exciting for Historic in Arena. It’s not yet confirmed if those cards will be included in the set, or obtained as some kind of special rewards.

Some of the cards will feature their invocation art, but will probably use the ordinary frames – once those versions become available, you can expect an updated gallery.

There was no official information about the Buy-a-Box Deal for this time, but it’s probably something similar. Anyways, the promo for Amonkhet Remastered is Regal Caracal. We don’t know which version we’ll get, but we’re hoping for the one from Secret Lair.

You can also get this card by simply redeeming a mythic wildcard.

If you don’t want to miss new updates and spoilers, give us a follow on Facebook or Instagram, so you’ll get all the fresh info as quickly as possible.

Finally, we’d like to shout out a great resource for Arena players, a list of all free Arena codes. Go check if you have redeemed all of them, as you can get free Packs.

Until next time, have fun and may you Amonkhet Remastered Packs contain many mythics.