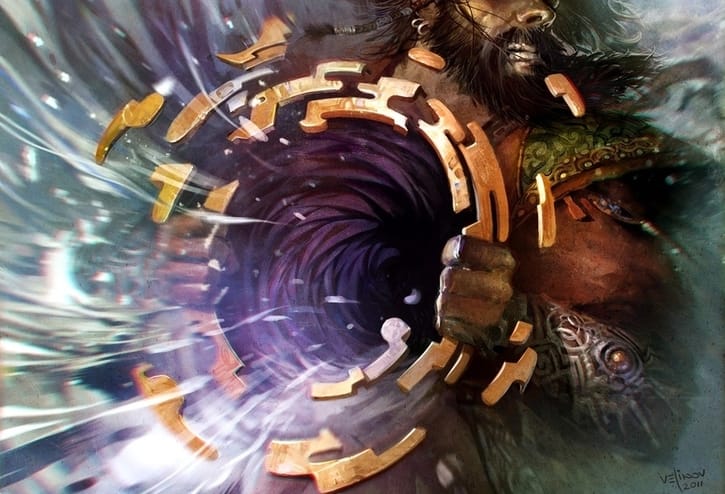 In Magic,one of the most striking things you can read on a card’s text is “you win the game” or “target opponent loses the game.” Alternate win conditions can be substantial.

When I was first learning Magic, I thought that cards with that text must be the strongest in the game. A creature can help me defend myself or damage my opponent’s life, but Near-Death Experience wins me the game. It must be good. I should put it in every white deck.

While I have since learned that Near-Death Experience is not an auto-include in white decks, I have grown to love building decks for alternate win conditions like it.

Many other players have professed the same thing: winning in a unique way is rewarding and spectacular. Because of that, I am here to present to you my top ten list for alternate win conditions in Magic.

(Keep in mind that many of these cards and associated decks are not playable in Standard. This list was composed largely with Modern or even Commander in mind.)

Liliana’s Contract is a bold plan. That’s pretty fitting, but this card requires a fairly precarious board state. Having four demons with different names at your upkeep is a feat.

Luckily, Liliana’s Contract also draws you four cards, so it is not wasted mana if you do not pull it off. You can play this card primarily for its card draw, and your opponent then has to begin worrying about your demon count as well.

If you want to play a demon-focused deck, this card could be included as an optional win condition.

The only factor against this card is that it relies on a condition that would likely win you the game anyway. It can be less interesting to have this win condition when it feels unnecessary.

Life gain decks have had an interesting history. It is a balancing act to gear your deck to gain life and also include payoff cards that can set you on the offensive. You might be able to get your life total to 50 or 60, but how do you win? Ajani’s Pridemate has always helped, but what if they can keep it at bay with their own creatures?

Felidar Sovereign is a mediocre lifelink creature, but that win condition can help some decks strike the balance. It has a defensive stat line, and it can gain you life. More importantly, you do not need to overcome your opponent’s board. You can just go ham with life gain, and this card might win you the game.

If it doesn’t win the game, it is a suboptimal card that still fits into a life gain deck. The opportunity cost of including it is pretty low.

Similar to Approach of the Second Sun, this alternate win condition is a mana sink. You just need to be able to pay the Progenitus-worth of mana to make your opponent lose.

Door to Nothingness is a card that demands a lot from its deck. Everything has to be geared toward this goal. This is what Kaleidostone, Composite Golem, and Channel the Suns were meant to do.

In fact, since those three cards are colorless or green, you can build a mono-green deck with Llanowar Elves and Elvish Archdruid. This would allow you to pull off Door to Nothingness with just one kind of land.

Not the most consistent or efficient, but Door to Nothingness is a fun deck-building puzzle and a satisfying win condition.

It was impossible not to lump these two together since their effects are so similar. They both turn the fear of decking out into a win condition.

Blue is very good at drawing cards and milling players. This win condition capitalizes on both. Your game plan with this deck is to draw and mill through your deck as quickly as possible and then activate your win condition. Keep one of these cards in your hand until you are able to draw from an empty library, and use counterspells to ensure that you can seal the deal.

There is also the added benefit of playing this deck against a mill deck that wants to empty your deck as its win condition. This is a rare scenario, but it is absolutely magical when you and your opponent realize that you are accidentally on the same team.

#7 Approach of the Second Sun

This one always struck me as conventional. Approach of the Second Sun is essentially a mana-sink. Your goal is to play this 7-cost sorcery twice in one game.

The more I saw this deck in action, however, the more I realized that it has more nuance and combo potential than I thought. Firstly, the first time you cast it, it does not need to be played from your hand. That isn’t terribly relevant, but if you can cheat it out with something like Narset, Enlightened Master, it can be an advantage.

More interestingly, the first cast does not even need to resolve, so there is an interesting interaction with Remand or similar counterspells.

However, you will need some counterspell protection of your own. Cards like Silence or Taigam, Ojutai Master might be mandatory in order to protect your win condition.

Helpfully, all of the best strategies for this card (draw effects, self mill, cost reduction, and counterspell prevention) work well with blue mana. A white-blue deck centered around Approach of the Second Sun is remarkably consistent.

This card is quite a bit more consistent alternate win condition than Liliana’s Contract. Also, I love it.

Revel in Riches’ creative elegance comes from the deck you would build around it. It should include several types of board-wide removal that won’t hurt your artifacts. You want Deafening Clarion, Kaya’s Wrath, etc. to help Revel in Riches build Treasure tokens. You also probably want a couple copies of Brass’s Bounty to speed up your victory.

However, the Treasure tokens themselves act as consumable sources of mana. Therefore, as you play the game, you will find yourself making countless decisions. Should you spend your tokens to play spells that may help you secure victory in the long run? On the other hand, what if you might be close to winning and spending just one token too many might cost you the game? These kinds of decisions are why I play Magic.

This card just came out in Zendikar Rising, making this the baby of the bunch.

This card is successful as a fun win condition because it is a control tool on its own. Alone on the board, Angel of Destiny demands removal or holds off aggression. It buys you the time that the deck needs to get going.

Even better, if you have this along with an established board, you can quickly gain enough life to set up the win condition.

In short, if you are ahead, this card can swiftly seal the deal. If you are behind, it can save you to get you back in the game.

As an added bonus, Angel of Destiny fits into a mono-white life gain deck. Since the deck is already viable, you have, in essence, already built around Angel of Destiny. You only need to include this deck as an alternate win condition – as opposed to having to completely design the deck around one card.

Sidenote: this card is notably superior to Felidar Sovereign though through its cost, stat line, and the timing of its win condition. Having this effect resolve at the end of your turn gives you more control than having it resolve after your opponent’s.

Unlike most other win conditions, this one is not built around the text on a singular card. You worry away at your opponent’s deck – just a few cards at a time.

The blue/black version of this deck is historically the most popular. You can pressure your opponent’s resources and remove many threats before they even reach their hand by using cards like:

Additionally, blue and black have access to famously effective removal and disruption. Those control options mean that your enchantments and horrors can often stay on the board and generate value.

This card is great to build around because +1/+1 counters are already beneficial to you. You already want to cast Hydroid Krasis. It’s a great card. Simic Ascendancy just gives a new win condition to that kind of deck.

If you really want to count on Simic Ascendancy (count, get it?), then you can include cards with Explore, like Jadelight Ranger or Adapt, like Incubation Druid. These already decent cards help further your alternate win condition. On top of that, Biogenic Ooze can overwhelm your opponent with Oozes while also pushing the clock on Simic Ascendancy.

Etrata, the Silencer is a clever card even without being a win condition. I like the flavor of this vampire ominously reappearing from time to time to take one creature out and disappear back into your library.

However, blue has access to some effects that can speed up that victory significantly. You can prevent Etrata from returning to the library with cards like:

In the event that something should happen to Etrata, black gives this deck access to some contingency plans. If Etrata gets in the graveyard, you can put it back in play with:

Assuming that your opponent’s deck has creatures, this card is very capable of winning you the game.

Infect has a special place in my heart. . . as unhealthy as that sounds. The last time that the infect mechanic was in the spotlight was 2010 and 2011 with Scars of Mirrodin, Mirrodin Besieged, and New Phyrexia. This was around the time that my friends and I were playing a lot of “kitchen table” Magic. Many of these cards make me feel nostalgic.

I say all of that to explain why I like this kind of deck even when I know how controversial it can be.

A creature with “infect” does not deal conventional damage. Instead, it adds -1/-1 counters to damaged creatures equal to the damage that would have otherwise been done. For example, if a Rot Wolf blocks a 3/3 creature, Rot Wolf would go to the graveyard and that other creature would effectively become a 1/1.

More relevant to this article, however, is that these infectious creatures apply poison counters to players instead of dealing damage. Once a player hits 10 poison counters, they lose.

There are many synergies with poison counters. Creatures with flying and trample make it much easier to impose some counters on your opponent.

Importantly, Proliferate effects, like Inexorable Tide and Spread the Sickness, can each add an additional poison counter to a player who already has one. Because you can add poison counters even when they establish a defensive board, these decks are very resistant to stalemates.

Playing weird cards and combinations for the sake of fun and experimentation is at the heart of why many players love this game. We all want to be the one to “crack the code” and find the combination that makes these funky cards competitive.

I learned not to put Near-Death Experience in every white deck I made, but I really enjoyed finding the place it did belong. I look forward to future cards like it that force us to think about the game in a different way.

Good luck, and have fun winning with alternate win conditions. 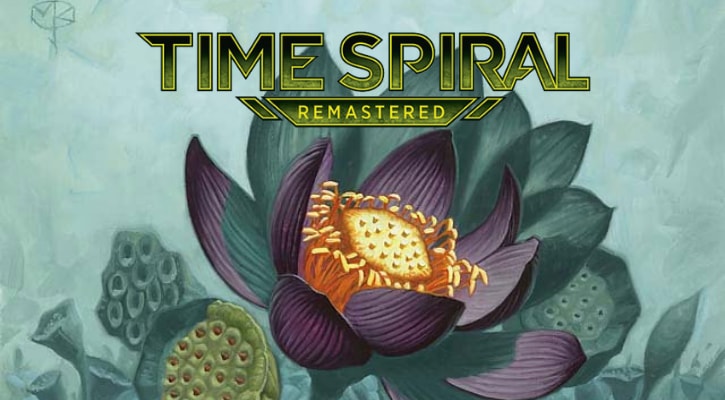