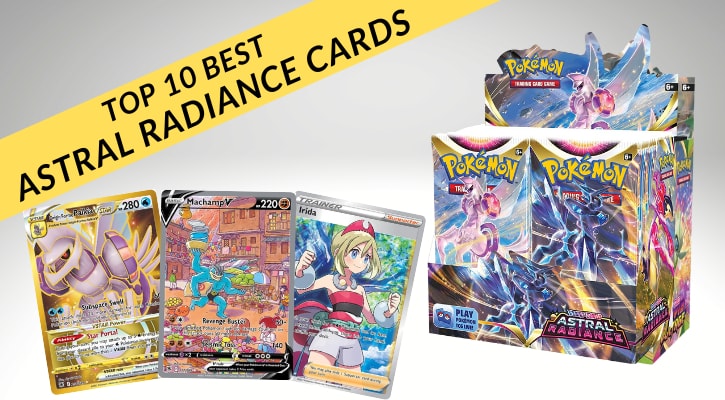 Are you looking for the best Astral Radiance cards? If so, you’ve come to the right place, as today we’ll take a look at the Top 10 best Pokemon cards from Astral Radiance set.

We choose the cards based on various factors, but mostly focusing on their price (or value), and their playability. These will be the cards that you’ll want to open in your Astral Radiance booster box. If you want, you can get one on Amazon.

Let’s take a look at the cards!

The effect of the card is quite powerful, and in the right situation can be even backbreaking. Both you and your opponent have to shuffle their hand into their deck. Then you get 6 cards, but your opponent ends up with just 2 cards. This can mess up your opponent’s plans and further your own. A great card!

The only Special Energy card on the list of the best Astral Radiance cards is the Douvle Turbo Energy. It provides to normal Energies, both that’s not all. The Pokemon that has this Energy attached to it, deals 20 more damage with its attacks.

This can be a really powerful in the right deck and with the right Pokemon.

Darkrai VSTAR is one of the VSTAR Pokemons. It has just a single attack, but it can potentially do lots of damage with it. It’ll depend on how many Dark Energies are attached to your Pokemons.

However, it also has a VSTAR Power. You can only activate one of these per game, so you should expect something powerful here. This one is called Star Abyss, and it does deliver. You get to return two Item cards from your discard pile to your hand. So once again, the card doesn’t just fit in any deck, but in the right one, it can be very strong.

There are a lot of cards in the Astral Radiance set with amazing art. There are lots of sets with many amazing cards, but this one takes it up another notch. This Beedrill V is one of the cards with very cool art.

Besides the cool art, the card is powerful enough, as can be expected from a V-Pokemon. It has lots of HP for a basic Pokemon, and it can attack quickly. It’s second attack gets stronger with more copies of Beedrill V in play, so keep that in mind when building around it.

Sneasler is another Pokemon V with amazing art. It’s also playable card, with one Energy attack that poisons, and the second attack that synergies nicely with the first one. Just beware of the Fighting type Pokemons, as Sneasler is weak against them.

This artwork of Origin Forme Palkia V is also amazing! The card itself matches the art. With the first attack, you get to search your library for a Stadium card. So, if you have a powerful Stadium in your deck, Palkia V will help you get it consistently.

The second attack can deal a lot of damage – a total of 200. However, you won’t be able to attack with Palkia V the next turn. On the plus side, the power of Palkia V also comes from the fact that it can evolve into Palkia VSTAR, which you’ll find a bit higher on our list.

The best Trainer card in Astral Radiance is certainly Irida. It’s a Supporter that let’s you search your library for not just a Water type Pokemon, but for an Item card as well. Sure, the card doesn’t fit in just any deck, but it’ll work wonders if you build your deck correctly.

Simply include some good Water type Pokemons, and some of the best Pokemon Item cards, and you’ll do great.

Here’s another VSTAR card among the best Astral Radiance cards, and the one that we’ve mentioned before. There’s just one attack, but it can be powerful. It deals 60 damage to the opposing Pokemon, and 20 damage to each Benched Pokemon.

Its VSTAR Power, called Star Portal is also absurdly strong. You can take up to 3 Water Energy cards from your discard pile, and you get to attach them to your Water Pokemons in any way you like. That’s some really powerful stuff!

Machamp comes from the first Pokemon generation. While it isn’t one of the most iconic Pokemons, it’s still pretty well-known. For that reason, it’s one of the most (if not the most) expensive cards in Astral Radiance, even if it’s not the strongest card out there. Of course, that goes for the special art that you can see above.

Finally, we’ve reached the end of the list of the best Astral Radiance cards. On the top, there’s room just for one card, and it’s Orgin Forme Dialga V. This special artwork is truly breathtaking, and it’ll look amazing if you manage to pull it from your Astral Radiance booster box.

The first attack lets you rebuy Metal Energy, which you’ll need for the second attack, which can deal whooping 180 damage. Diagla V is great card to add to your collection, for sure!

That’s all about the best Astral Radiance cards. If you want to try your luck and open some of these cards in a booster pack, you can get a Astral Radiance booster box on Amazon.

If you want to read more about Pokemon cards, you might like to check some of the following articles, before you go: