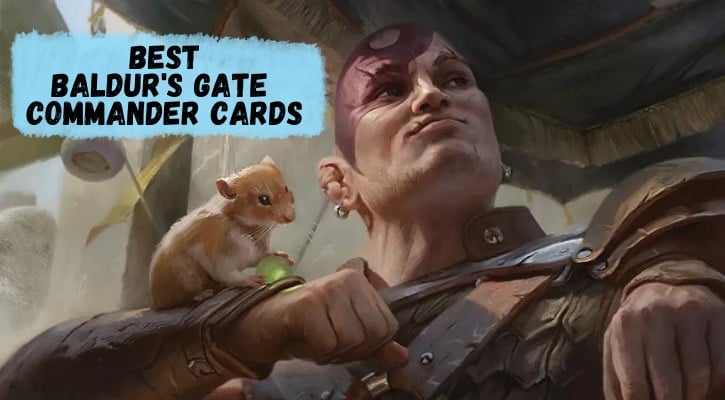 We’ll start with the best cards for the 99, and then we’ll move to the best commanders in this set. Let’s get right to it!

First up, let’s start with some cards that didn’t quite make the list, but are still interesting enough that they deserve a mention.

Puzzlebox obviously isn’t meant for just any Commander deck, but if you’re planning or rolling lots of dice, then it’s going to be an amazing mana rock. It can get you an artifact from your deck into play for free! It’s always cool to see cards that support the less powerful strategies, and Vexing Puzzlebox does just that.

Here’s yet another card that fits into a specific archetype. Earthquake Dragon wants to be in a Dragon tribal deck. In that shell it can sometimes be a 10/10 with flying and trample for a single mana! On top of that it can also Regrowth itself.

Sure, it won’t always be good, but it’s certainly a type of card that some players absolutely love. Let us know if you’re one of them in the comments below.

Campfire probably isn’t insanely powerful, but it’s an interesting card for sure. It can support various life gain strategies, but the better of the two abilities is certainly the second one.

It basically let’s you avoid the Commander tax once. It gets better with partner Commanders, as you can double your tax evasion. So while Campfire won’t fit in every deck, some might be happy to include it.

With honorable mentions out of the way, let’s start with the actual top 10. Here we’ll talk about the best Baldur’s Gate Commander cards for the 99. The best commanders will be featured in the next section.

We’re starting with a weird card. Lae’zel’s Acrobatics is a bit clunky with four mana, but you can get a lot of value out of it. That’s especially true, if you’re playing lots of creatures with enter-the-battlefield effects.

How good the card is will depend on the die roll. You can always count on it blinking your creatures at least once. However, if you’re lucky, you can blink them twice, in which case you’ll get your creatures back at the next end step. This is useful, to protect your creatures from a mass removal spell like Wrath of God, but you won’t know if it’ll work until you’ll roll the dice.

Next up on the list of the best Baldur’s Gate Commander cards is Majestic Genesis. It’s a quite expensive sorcery, but it can certainly deliver with the right commander. You’ll want something with high mana value, and your decks to include lots of permanents. (Thankfully, lands are permanents as well.)

A good option would be The Ur-Dragon. With it you’d get to look at the top nine card of your library, and put any permanents you find there onto the battlefield. There’ll surely be some powerful Dragons there.

Another cool option is Ghalta, Primal Hunger, which technically costs 12 mana, so you’ll get to look at the twelve cards of your library, and get an instant board presence from a single card.

Don’t forget that you don’t even need to have your commander in play, it can be in the command zone, and Majestic Genesis will still work.

Elder Brain is a really fun card – maybe not for your opponents, though. However, you have to invest seven mana into it and you have to attack with it to get the effect. At least you don’t have to deal combat damage, just attack, and you get to steal the cards from the defending player.

Sure, they’ll get a new hand, but you did get a bunch of cards from your opponent as well. Preferably from the one with the most cards in hand too.

Adventures are back with Baldur’s Gate! The Adventure part of this card isn’t very exciting. For three mana, you get to mill five cards, and return a creature card among them to your hand. That’s pretty mediocre effect.

However, the best part comes from the artifact “half” of the card. You have to pay four mana to play it, and two to activate it. For your troubles, you get to put a creature card from your hand¸onto the battlefield. That could be any sort of a powerful creature, and you can activate it at instant speed, which is very useful.

Monster Manual can certainly be a powerful card in the right deck.

Do you hate players searching their libraries? So does Archivist of Oghma. It’s another hate bear which will surely see a lot of play in Commander, and possibly even in eternal formats like Legacy and Vintage.

Whenever an opponent searches their library, you gain a life, and you draw a card, thanks to this Halfling Cleric. Whenever opponent tutors for something or even fetches a let with Fabled Passage, you get a card. The life gain can also be relevant if your deck has life gain synergies.

The best part of this is that Archivist cost only two mana, and has flash, which means that you can easily fit it in most types of White Commander decks.

Damnation is certainly one of the best Black Commander staples. Blood Memory does cost three mana more, but has a nice effect tucked onto it. For each nontoken creature you destroy with it, you get a Treasure token.

So how good Blood Money is, depends on what decks your playgroup is using. If there are a lot of nontoken creatures on the board, then this mythic could certainly be one of the best Baldur’s Gate Commander cards for you.

Legion Loyalty can certainly be one of the best Baldur’s Gate Commander cards, provided that you’re playing multiplayer game. (In a 1vs1 Commander game this doesn’t do anything.)

Of course you’ll want to have some board presence, but once you do, this enchantment can do some bonkers stuff. You attack one of the players, and for each attacker you make a copy for each other opponent, that attacks them.

Tokens will go away at the end of combat, but you might even finish some players off before that. Additionally, you can also get a bunch of value from various enter-the-battlefield effects. This is a very powerful card, albeit a bit clunky.

If you manage to deal damage to a player with this Dragon, you’ll get rewarded handsomely. Well, you might get only a single Treasure, but that’s variance for you. On average, you’ll get around 10.5 Treasures, which is pretty nice.

You’ll probably want to pair this Dragon with Lightning Greaves in order to get your mana back immediately. You might even end up with more mana than you started the turn with, if you’re lucky.

This card is the great equalizer. Of course, it only works in your favor, and if you’re behind you can catch up, if you manage to attack with it. It does need to connect, but that’s somewhat offset thanks to the myriad ability.

Many White Commander decks will happily add a copy of Battle Angels to their 99.

Finally, the best card for Commander in Baldur’s Gate – Storm King’s Thunder. It feels similar to Torment of Hailfire. You put a bunch of mana into it, and you’ve probably won the game. Of course, you’ll need to pair it with a appropriate instant or sorcery in order to do that, but that shouldn’t be too big of a problem.

Besides, you can also use it in mid-game, not to finish the game necessarily, but just to get some value. As such this is a very versatile card, and one that we’ll see plenty of times in the future Commander games.

Now it’s time to discuss the best Commanders from Baldur’s Gate. We picked these based on their power level, uniqueness and fun factor. Rating them purely on power level is incredibly hard, because a lot of it will depend on your build. With that said, let’s get right to it.

As before, we’re starting with some cards that missed the list, but we still wanted to talk about.

A two mana 2/2 vanilla Grizzly Bears[/s] are quite iconic. Now they can be your commander, but they aren’t vanilla any more. Instead, Wilson has a bunch of keywords stapled onto it. You can also choose a Background for a second commander to make this Bear even better. What’s not to like?

What’s better than a planeswalker commander? A srcy-tribal commander, perhaps? Elminster is both in one card! All of its abilities work perfectly together, and it can provide you a big army of 1/1 Faerie Dragons out of nowhere.

This will certainly be a fun card to build around.

Gorion is a great commander for an adventure deck. This mechanic didn’t have a dedicated commander just yet, so it’s certainly a welcome addition for players who like this mechanic.

Here’s the Man-Bear-Pig. Well, not quite but close enough. It’s basically a tribal commander for creatures with mana abilities, and a pretty great one at that. These creatures are already powerful on their own, but with such commander, you can build a really strong deck. as it provides everything:

It’s been a while since we had so friendly commander. it’s certainly not he strongest one out there, but you’ll be able to do some fun stuff with it, and there won’t be a target on your back.

Gluntch is all about sharing. There are three options to choose from:

You can pick one option for yourself, but you have to give the other two to two other players. This is a great way to get some allies, and make sure that you’ll survive well into the late game.

Minsc & Boo, two popular characters from D&D can now be your planeswalker commanders. When you play this card, you get both the planeswalker and the hamster, and then the decisions begin. You can start buffing Boo, or other creatures or you can sac a creature to deal some damage. If you’ll sacrifice a Hamster, you’ll also get to draw cards.

All things consider, this is a really nice design, which looks like it’ll also play very nicely.

There are plenty of fun Abzan commanders, but Myrkul certainly brings something fresh to the table. Sometimes it’ll be indestructible, but the weirder ability is the second one.

It triggers whenever another nontoken creature of yours dies. You may exile it, and if you do, you get a copy of that card. But here’s the weird part – it stops being a creature, and is only an enchantment from now on. This enables various synergies, for example with constellation. Myrkul looks like one of the best Baldur’s Gate commanders to build around.

Tasha’s our choice for the best Commander in the Baldur’s Gate set. If you like taking cards from your opponents and playing them yourself, you’ll surely agree with us.

Tasha is yet another planeswalker commander, and all her abilities support playing the opponent’s cards. Whenever you do so, you’ll get a Demon. With plus one you get to draw a card and prepare an opponent’s sorcery or instant for the taking with the last ability. Hopefully, your opponents will have something good to steal, and won’t be mad when you do that.

That’s it for the best Commander cards in Baldur’s Gate. If we missed one of your favorites, make sure to leave a comment below to let us know. If you want to try your luck and maybe open some cards for your deck, you can get a Baldur’s Gate Set Booster box on Amazon.

Don’t forget that in this article we only talked about the card from the main Battle for Baldur’s Gate set. You can also explore the new cards in the Baldur’s Gate Commander decks here.

Additionally, here are some other articles that might interest you: