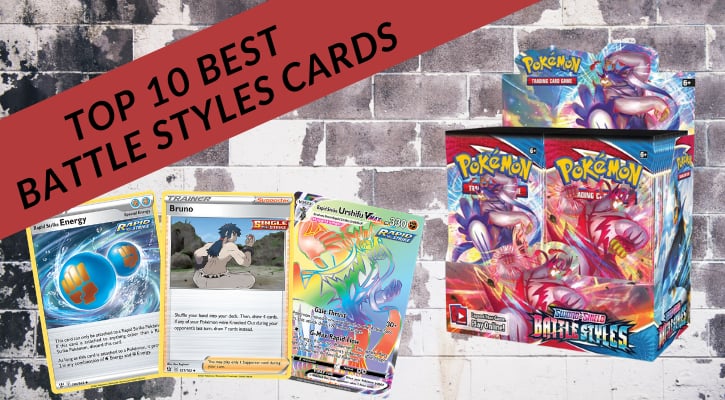 New Pokemon TCG set is out and it’s time for another Top 10 article. Today I’ll talk about the best Battle Styles cards, which you can use to make your decks better. There are plenty of both Rapid Strike and Single Strike cards on the list.

If you want to get these card, you can already get a Battle Styles Booster Box on Amazon.

With all that said, let’s get right to it and start with number 10 on the list of the best Battle Styles cards.

Falinks cards tend to get stronger based on the number of Falinks you have out. Rapid Strike Falinks, however, is a bit more inclusive. With a full bench of Rapid Strike Pokemon, it attacks for 120 damage for a colorless and a fighting energy.

Normally, the cost would make Falinks too slow to be competitive, but Rapid Strike decks will be playing Rapid Strike Energy. With this low setup cost, Falinks can be a useful addition for a Rapid Strike deck. Especially if you’re looking for a single-prize Pokemon that can dish out big damage.

Compared to the Team Attack Falinks from Rebel Clash, the damage output isn’t as high. However, the ability to put other Pokemon in your deck besides Falinks is worth it. With 110HP, it can even survive long enough to continue its attack.

It’s not as flashy as some of the other cards in the list, but Yamper makes the cut for its combo potential. Yamper’s ability, Ball Fetch, can get back both a Great Ball and a Poke Ball from your discard pile. With your newly reclaimed items, you can hopefully get two more Pokemon, like another Yamper.

Play the Yamper, repeat the process and maybe throw in some Scoop Up Nets. What you do after assembling a legion of electric corgis and balls is up to you, as they don’t really do much else by themselves. However, if you’re already playing Great Ball and Poke Ball, and want to get more mileage out of them, Yamper might be your new best friend.

Attaching free energy to your Pokemon is always a useful effect. Single Strike Houndoom’s ability searches your deck for a Single Strike energy to attach to one of your Single Strike Pokemon. You can do this once a turn, every turn. However, you probably won’t get more uses than the four copies you can put in a deck.

That Pokemon then gets 2 damage counters. But since the Special Effect of the energy is to increase attack damage by 20, it’s a fair trade. Single Strike decks will have a hard time keeping up with the energy gains of their Rapid Strike rival. This card helps close the gap. The extra 20 damage might also provide enough damage to turn a two-turn knockout into one.

This pair of double prizers are one of the best Battle Styles cards, thanks to because of their high HP and unique attacks. Flapple V lacks a single energy attack, which hurts its potential as a quick attacker. While Tart Siliva costs two energy, the effect can slow down your opponent. The attack only deals 20 damage, but making the defending Pokemon’s attacks cost two more can either force a switch or a wasted turn.

Evolving Flapple V brings its HP up to 320. This keeping it safe from being one hit from any attack that isn’t from a Fire type. Flapple VMAX’s attack can hit for a whopping 250 damage. However, there’s the catch of 10 less damage for every damage on Flapple VMAX. With the current Standard metagame using big, high damage attacks, Flapple VMAX should consistently hit for over 200 damage.

Flapple v and VMAX are surely an exciting pair of cards for players looking outside the Rapid/Single Strike cards.

A reprint that has been sorely missed, Level Ball searches your deck for a Pokemon with 90 HP or less and puts it into your hand. For a deck built around it, Level Ball is essentially a Master Ball with four copies instead of one.

It can search utility Pokemon to smooth out future turns, or search up evolution lines that meet the HP requirement. Best of all, Level Ball puts the card into your hand as opposed to a card like Nest Ball. For a deck like Mad Party that wants to search up specific Pokemon in order to discard them, Level Ball is a welcome addition.

If you loved evolving your Frosmoth and Galarian Damartia but still want more to evolve, here’s a Stage 2 Pokemon for you. With 150HP, Kingdra will still get one hit by most of the big attackers, but that’s not a problem. Kingdra is happy to sit on your bench, watch your big water Pokemon get knocked out, and get right up there for a revenge kill.

Kingdra’s ability is like a Super EXP Share, as it gets all Water energy from your Knocked Out Pokemons. Kingdra’s attack deas 40 damage for each water energy on it. This means it can threaten massive amounts of damage without ever needing to put energy on it. With the right setup and a little luck, Kingdra might just win you the game.

Was the problem with Maxie’s Hidden Ball Trick that it could be used with any Ground Pokemon? That’s the question that these cards pose. If you can meet the heavy restriction of Mustard being the only card in your hand when you play it, you’re rewarded with a fresh grip of five new cards. Additionally, you can put one of your Single Strike/Rapid Strike Pokemon from discard to the bench.

There’s no restriction on which of the Strike team Pokemon you can revive this way. So why not go big with Pokemon V, or an already evolved Pokemon? Why not both? Fret not, there’s a VMAX for each Style!

If you go second, you can potentially play this card as your first Supporter, and that’s a great spot to be in. Already got your big attacker out? You can simply get a Stage 1 or 2 Pokemon – you don’t even need to include the Basic Pokemon in your deck.

The restriction means you won’t always be able to pull off these cards, but if you do? You’ll find yourself in a very good position.

We’ve already seen a few Supporter cards that increase in power if one of your Pokemon was knocked out on the previous turn. They’ve almost always been widely played. Bruno’s effect shuffles your hand into your discard pile and draws you four new cards. However, if you had a Pokemon KO’d last turn it draws seven cards.

Sure, having your Pokemon knocked out isn’t a good thing. But unless you’re absolutely crushing your opponent, it will happen. Bruno is a good way to catch up from behind, as more often than not you’ll be drawing seven cards from it.

Bruno, like the popular Supporter Cynthia, shuffles the cards back into the deck instead of discarding them. This might leave you redrawing some of the same cards you just shuffled back. On the other hand, it can also keep key cards in the deck for later use. Bruno also has the Single Strike tag, which makes it even better in a dedicated deck. Nevertheless, it’s still very useful on its own and certainly one of the best Battle Styles cards.

These last two cards on the list of best Battle Styles cards are extremely powerful together. Besides, they’re strong enough on their own to take their place at the top. Rapid Strike Energy is a Special Energy that can only be attached to Rapid Strike Pokemon, but it provides them with two energy in any combination of Water and Fighting.

Double Colorless Energy, in its many variations, has been a staple of the game since the first set. Twin Energy, the current standard of two-for-one energy, can’t be attached to Pokemon GX or Pokemon V. All Rapid Strike Energy needs is a matching Pokemon, and lucky for us, there’s a few Rapid Strike Pokemon V that make excellent targets for this card. There’s even a VMAX! Speaking of which…

The secret’s out! Okay, I’m not the first person to call this the best card in the set, but what makes it so good? Is it the 330 HP and weakness to the underplayed Psychic type? What about the one energy attack that easily hits for 150 damage? Or the second attack, which hits two Pokemon of your choice for 120 damage, striking fear into the hearts of every Jirachi and Oranguru?

It’s even sillier when paired with the other Rapid Strike cards. Their Special Energy can power the second attack for a potentially game-winning bench snipe. Rapid Strike Mustard can cheat it into play from your discard pile as early as turn one (if you go second). Additionally, Rapid Strike Octillery can search up this card or its Basic form every turn.

Rapid Strike Urshifu VMAX is a scary card. If a dedicated Rapid Strike deck breaks into the competitive scene, it’ll probably be riding on the back of this card.

That’s all about the best Battle Styles cards. Do you like a card that’s not on the list? Let me know in the comments below. If you’d like to try your luck and open one of these amazing cards yourself, you can buy a Battle Styles Booster Box on Amazon.

If you’re looking for more Pokemon articles maybe some of the following ones will interest you:

Until next time, have fun, and may you open plenty of good cards in your Battle Styles boosters.