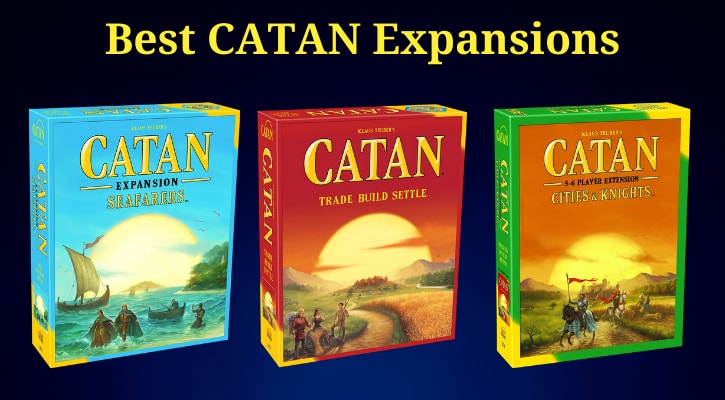 Settlers of Catan is a world-famous classic board game. But you probably knew that. You played the game, you liked it, and now you want to learn how to get more of it. In that case, you’ve come to the right place, as today we’ll talk about the best Catan expansions you can get.

Since we won’t settle for nothing less than the best choice for you, we prepared various options for different types of players.

This can be a pretty daunting task, as there are over 30 different products, if you count all expansions, scenarios and licensed adaptations. That’s why we’ll focus on the major expansions, which will get you the most bang for your buck.

If you’re in a hurry, here’s a quick recap of the top 3 candidates for the best Catan expansion. Any of these three will also work great as a gift for a Catan player (if they don’t already have it.)

If you do have the time, let’s take a look at why we choose these products.

Necessary for Expansions: The Base Catan Set

Before we start with our search for the best Catan expansion, we should talk about the main game first.

Naturally, if you haven’t played Settlers of Catan yet, this is the version that you should get. It’s the base set that includes everything you need for a game with 3–4 players. You’ll quickly learn why many players consider Catan to be one of the best board games of all time.

The important part to remember is that you need the base set to play with expansions. So if you want to try something like Seafarers Expansion, you can’t actually play it, if you don’t have the base set.

The great thing about it is that you can 100% enjoy the game without any expansions. Some players claim that the vanilla Catan is their favorite way of playing.

However, if you want to expand your Catan experience, there are a bunch of amazing ways to do so.

The Seafarers expansion is probably the best place to start, especially if you just want to enrich your experience and don’t want to add too many complex rules.

As the name suggest, this expansion gives you the option to explore the seas. You’ll no longer be limited just to the main Catan island. Instead, you’ll have access to things such as:

The best part is that while the game adds another layer, it doesn’t take much time to learn. One play-through (or maybe two) and everybody will completely understand it. This makes this expansion a great choice for casual board game players.

Another great thing that comes with the addition of ships is that they require Wool and Wood. In the original game, Wool (Sheep) is considered the weakest resource, so it’s a nice addition that you have another way to use them.

Anyway, if you’re wondering which Settlers of Catan Expansion to buy first, Seafarers is the obvious choice.

Now, if you’re a gamer by heart, and you have mastered the base game, here’s a challenge for you. Cities and Knights expansion definitely makes the game harder to master, but more enjoyable for competitive play groups.

Perhaps the best single thing about this expansion is that it allows you to build up instead of just going wide. In the base Catan game, it can quickly happen that one player can’t expand, as opponents’ roads are blocking them. With Cities & Knights, everyone can have a viable strategy, even if limited to a smaller space.

This work wonders for the game play experience, as it allows a player who stumbled early on, to still have something to work towards in the late game.

However, the expansion isn’t perfect for everyone. The additional complexity isn’t great for kids or for less experienced gamers. Besides, it usually doubles the time you need for a single play-through as compared to the base set. This can be a problem, if you can’t dedicate a big chunk of time for your game night.

So if this is your first time getting an expansion, and you’re asking yourself which Settlers of Catan Expansion to buy, this probably isn’t the right one. However, if you’re familiar with other more complex board games, you can definitely get it.

The version we featured above comes with extension for two additional players, but you’ll also need a base set extension for the fifth and sixth player to support them.

For those players who want something less vanilla than the Seafarer expansion, but not as complex as Cities and Knights, then Traders and Barbarians expansion is the right choice.

It’s a great option for players who’d like to get something in between. The game rules aren’t overwhelming, while still providing many additional options, such as:

Besides all of this, you’ll also have a way to play Catan with just two players. So if you’d like to spice up your regular Catan game, you should definitely get the Traders & Barbarians Expansion.

Catan Expansion that Completely Changes the Game: Explorers and Pirates

Do you want to really shake the game, while still playing with the base Catan set? In that case, you don’t need to wonder which Settlers of Catan expansion to buy, because Explorers and Pirates is the right one for you.

At first look, it might look similar to the Seafarers expansion. However, the mechanics are very different. Even though you still have ships, they function differently. For example, in Seafarers they act as roads on the sea, here they are actually moving around.

Your ships will also be able to carry crew, or spice sacks to transport them for value. Each player will also have access to their own pirate ship, which they can use to mess with their opponents.

All in all, the game becomes more focused on exploring and sailing and less on just building a civilization. So if you’d like to get a different take on Catan, this expansion is probably a fine choice for you.

Sure, we talked how you can completely change the game with Explorers and Pirates. But what about playing Catan in space?

This is a separate game, that’s a new take on Catan. You’ll still enjoy some of the same things, but with a new twist on the game.

This is actually the Second Edition of the Starfarers game. Players had many complaints about the quality of the game pieces in the first edition. Thankfully, they took care of this, so the Second Edition is much sturdier and won’t break that easily.

About the game play — one thing you’ll notice is that is somehow a bit less competitive, as there is less focus on negotiating and trading. Both of these mechanics are still present, but less game defining.

Additionally, there are no roads. Of course, you’re in space — so why would there be roads? This means that you can’t fully block a player from expanding. While this can be a useful tactic in base Catan, it’s usually pretty frustrating for the player getting blocked.

Finally, multiple different strategies seem viable in this version of Catan. You can try to:

The game also has one very important thing, which is a catch-up mechanism. Even if you had a bad start, you’ll still have a non-negligible chance of winning the game. This way, players won’t get bored, even though the game can take more time than your base Catan game.

Is there an objectively best Catan expansion?

No, not really. As we mentioned before, our recommendation for an average play group would be Traders and Barbarians. However, different play groups will like different expansions, as they are all amazing in one way or another.

Where to start with Settlers of Catan?

You should always start with the base Catan game, as it’s needed for practically every expansion. It also has a very clear rule book, which makes learning the game fun and quick.

Which Catan expansion to get first?

The best one would be Seafarers. It adds another layer of game play with the ability to explore the seas. On top of that, it isn’t too complicated, and you’ll get the hang of it quickly.

Do you need Catan expansions to have a fun game?

It’s certainly not necessary. The base game offers a lot of replay-ability, without any expansions. However, if you enjoy the Catan gameplay, and want to enrich your play experience, then expansions are a great way to do so.

Which Catan expansion is best for 2 players?

We’d recommend Explorers & Pirates. However, you can also just modify some rules and use the base game. We talked more about this and the best Catan expansions for 2 players here.

Is there a premium version of Catan?

Yes, there is. There is a 3D version of the game, which is quite expensive, compared to the regular game.

Anyway, that’s all for today. Hopefully, you found which is the best Catan expansion to buy for yourself and your play group. If you have any additional questions about Catan and its many expansions, feel free to ask us in the comments below. We’ll try to do our best to answer as quickly as possible.

Note that whichever of the mentioned expansion you decide to get, they also combine well with one another — except the Starfarers, which is a standalone game.

If you’re looking to buy a board game as a gift, you can check our Board Game Gift Guide, which can help you win many cool ideas.

Until next time, enjoy life and may your new Catan expansion bring you and your play group countless hours of fun!