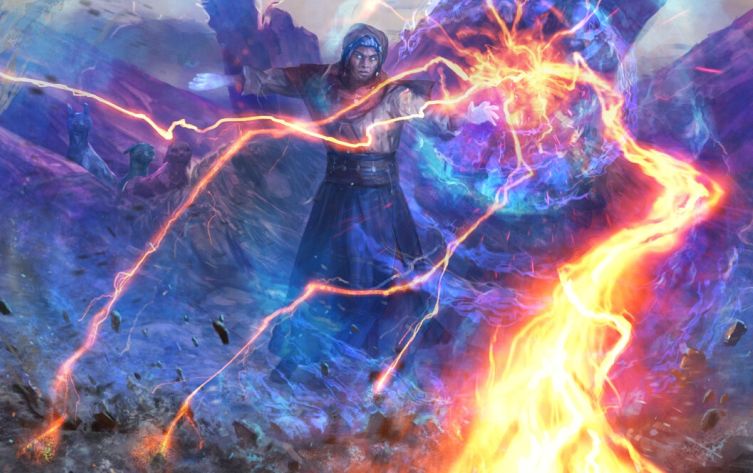 Hello and welcome to another Top 10! Today we’ll talk about best Commander 2020 cards. These are new cards (so no reprints), that are good in Commander, but aren’t Commanders themselves – that’s a separate article.

Alongside each card we’ll also include in which deck you can get it. If you click on the deck’s name, it’ll take you to its Amazon page, where you can buy one.

UPDATE: Are you looking for the new Commander cards? You can find best Commander 2021 cards here.

There are tons of powerful artifacts in Commander. So stealing them is obviously pretty powerful. Still, six mana is a pretty high cost to pay, even though you might upgrade your creature too.

To use this bird to its fullest, you definitely want multiple mutate creatures. Imagine mutating Gemrazer on top of it. For just three mana you get to both steal an artifact and destroy another one – now that’s a pretty good deal.

You can also just play Souvenir Snatcher as your only mutate creature, depending on how strong decks your playgroup is using and what kind of artifact you can steal. The more expensive their artifacts are, the better this bird becomes. Of course, it’s always fine just to steal their Sol Ring too.

Surly Badgersaur surely is great in a dedicated discard deck. It’s stronger than in looks, while also being a pretty fun card.

It enables a bunch of interesting “combos”. For example, with Tectonic Reformation. When you have both in play, you can pay one red mana and discard a land, to draw a card and create a Treasure token. So you can basically cycle your lands for free, or accumulate a nice pile of Treasures for future use.

What this artifact lacks in efficiency, it makes up in versatility. In your average game of Commander you can use this artifact to either get lots of mana or different useful abilities.

Of course, its power level depends on what you and other players have in your mana base. Here are just some example of useful lands to use with Refractor:

Slippery Bogbonder is a fun callback to Slippery Bogle. But it’s not just that, it’s a very playable card in Commander.

First, you can just use it to give your commander hexproof. That by itself is already very important, as commander is usually the centerpiece of the deck. Secondly, it works even better in some specific shells.

For example, Skullbriar, the Walking Grave pairs incredibly well with the Bogbonder. You can give Skullbriar not only hexproof, but all other counters your creatures have. If your opponents somehow manage to get rid of it, all counters remain there – even in the command zone!

Commander 2020 brought us a cycle of free spells (as long as you control a commander). Most of them appear on this list, as free spells are broken.

You usually don’t want to overload your deck on single targeted removal spells, however most black decks should find a space for this one. You want to have access to some removal spells to deal with opposing commanders, and what better way to do in than for free?

Dismantling Wave is one of those cards that gets significantly better with more player in the game. (You can found more similar cards in our Top 10 Cards for Multiplayer.)

If you’ll play this in a four player game, you’ll get an easy three-for-one most of the time. The cycling part will not come up every game, but when it does – it can easily win you the game against certain types of decks.

Would you look at this? There’s another white card here! White really needed some help and Commander 2020 delivered.

Flawless Maneuver is just the card you want in your white decks. You can tap out for your commander without worries. You can also do alpha attacks and then give your whole team indestructible, without your opponents suspecting.

Deflecting Swat is another free spell. In contrast to Flawless Maneuver, this can be used for both defense and offence.

If someone tries to kill your commander, you can just deflect it on one of their creatures instead. Another benefit of redirection spells is that they work against spell that can’t be countered like Abrupt Decay.

What’s the most powerful spell to redirect with Swat? Tell us your suggestions in the comments bellow!

Verge Rangers isn’t the most powerful card in a vacuum. However, once you take into account that it’s mono white, you can see why it’s so high on our list of best Commander 2020 cards.

Verge Rangers are doing something that not many white cards do. They give you a form of card advantage and make sure that you won’t miss any land drops. Hopefully, white gets more cards of this kind.

The best card in Commander 2020 is surely the zero mana counterspell! Of course, you can only counter noncreature spells, but that’s mostly what you want to counter anyways.

Protecting your commander is incredibly important and Fierce Guardianship helps you do just that. It’s an auto include in just about every blue deck, as its price suggests.

That concludes our Top 10 best Commander 2020 cards article. With so many new cards coming in this year’s product, we surely missed some. Which is your favorite new card from Commander 2020? Tell us in the comments bellow.

You can find out more about Commander 2020 here. If you’re looking for a new deck, you might need a new deck box. In that case, check our choices for the best deck box for Commander.

Anyways, that’s all for today. Until next time, have fun and may you always have your zero mana spell in your hand to protect your commander.