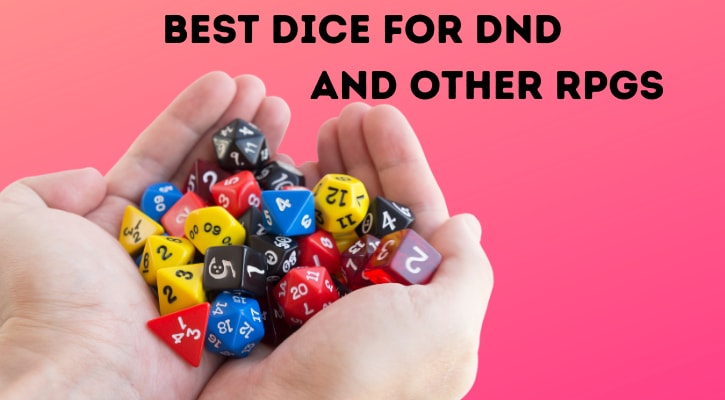 Dice are your most important tool in D&D. They determine your characters’ successes and failures, and are a great contributor to the story you and your group craft. But, if you’re somebody who’s never used anything more than the typical 6-sided dice for Yahtzee and Monopoly, it can be overwhelming to to find the best dice for DND.

Even if you’re no stranger to D&D or RPG dice, it can be difficult to narrow down what you want. This article will break down your options so you can decide what you need.

What are RPG Dice?

Dice for roleplaying games tend to come in a set of seven. These sets are comprised of seven types of dice, each name corresponding to the number of sides:

How Many Dice do You Need for DND?

The dice you use depends on the system you intend to play. D&D uses each of the seven dice for different things, whereas Monster of the Week only uses the d6. This should influence your decision on what to buy.

If you’re just starting out, I strongly recommend buying at least a full set of RPG dice. This set will be invaluable in all your RPG adventures. After that, I would recommend buying a second set – having 2 of each die makes it easy to roll with advantage or cast high-damage spells in D&D, for example – or a set of d6s, depending on your system. The d6 is often used for damage in many systems, so you might consider picking up a set regardless.

Once you’ve gotten your first couple of sets, the rest is up to you. You can start collecting your own dragon’s horde of dice, or keep yourself to a more manageable (and portable!) amount. The rest of this article will discuss your options for dice and dice accessories.

The most common sets of dice you’ll see are made by Chessex. These are the bread and butter of the dice market and they make everything from flat, single-color dice to glow in the dark sets. You’ll see these dice in most of your game and hobby stores.

You can never go wrong with Chessex – they’ve been doing this long enough to have a certain guarantee of quality. However, if you’d like your dice to look a little nicer and reflect your personality, there are many alternatives.

The most notable is Die Hard Dice. With fantastic customer service and a great selection of high-quality product, you’ll always be satisfied. I started supporting them during their initial Kickstarter and never stopped. Buying from Die Hard Dice is always a guarantee of great quality and customer service, and you get to support some great folks to boot.

If you don’t see anything you like there, alternatives are just a couple searches away. The dice market is far more expansive than you might think – one company even makes ice-cream themed dice.

If you want to pay more to stand out, you could always invest in some more atypical dice. Metal dice are a favorite among collectors.

You can find a bunch of various metal dice on Amazon. Here’s one suggestion – dice with a Dragon Scale styling. They certainly look quite awesome.

The Die Hard Dice team also has a great line of metal dice – it’s what they became known for, during their Kickstarter – and you’ll never go wrong picking up a set of their Mythica or Forge Dice.

But again, Die Hard Dice aren’t the only ones making fancy dice. A number of other companies produce them. It doesn’t stop at metal dice, either – you can find wooden dice, meteorite dice, and even dice made from human bones (don’t worry, it’s ethically sourced). Obviously these will be more expensive than a regular polymer set, but they’re purely for aesthetic purposes.

If you pick up heavy dice, make sure to roll in a tray or on a mat so you don’t damage the dice or the table!

If you’re looking to collect many dice, or if you simply plan to buy several sets at once, it is more cost-efficient to buy dice in lots.

One of the most well-known lots is the Chessex Pound O’Dice. That’s a very cheap way to get a variety of dice. However, the dice are all random, so if you prefer to have whole sets these probably aren’t the best dice for DND for you.

If you just want a ton of assorted dice, it’s a great choice.

The Wiz Bag of Holding is similar, except it has X full sets of dice, and comes in a nice drawstring bag (which looks like a D&D Bag of Holding). This is a great way to step into dice collecting, especially if you need to transport them. Its sister product, the Bag of Devouring, has a much nicer-looking dice, but I personally don’t like the bag’s design as much.

You can find other assorted lots on places like eBay, and some companies sell random sets or lots as a good way to get some assorted dice.

Other Products and Supplies

The most important dice accessory is a bag or box in which to store them. You’ll probably want something light for transport, and there are many aesthetically pleasing options. Some of the best dice bags are handmade – Etsy is a good way to support creators and get high-quality (and customizable!) products.

You could also get this fun bag, with the slogan well known to DND players – “The dice giveth and the dice taketh away.”

If you want an even fancier way to store your dice, explore alternative products such as Wyrmwood Gaming’s Dice Vault. Products like these are often heavier and store fewer dice, but they look great and add a lot to the table.

Another accessories many consider essential is the dice rolling tray. Trays prevent your dice –especially the metal ones – from damaging minis, maps, tablet screens, the table, and even the dice themselves. They also keep your dice from flying across the room or table. This might be especially critical for that one friend who rolls RPG dice like they’re playing craps.

One example is this Blue Sword Dice Tray by Norse Foundry. The design is simple and elegant and it’ll get the job done.

If you want something more special, Die Hard Dice create a nice dice tray that snaps together and folds flat. It’s high-quality and will last forever, while being light and easy to transport. On the other hand, Wyrmwood Gaming sells many dice trays and they’re as great as all of the Wyrmwood products are – though as usual wood is heavier and harder to transport.

Die Hard Dice takes it one step further with their Scroll of Rolling, allowing you to store and roll your dice in the same, aesthetically-pleasing product.

Some like to use dice towers, tall structures that do the rolling for you. While some insist that they make the dice more random, they’re really just an optional aesthetic choice.

C4Labs produced this quite amazing Walnut Dice tower. While this might be a bit pricier, you can also explore various cheaper options from C4Labs on Amazon.

You can also get get fancy wooden towers from Wyrmwood or castle-themed ones from Etsy. There really are a ton of options for you to choose from.

Additionally, if you’re on the more creative side, you can DIY one by 3D-printing it or make one from an empty Pringles tube. Here’s an example by u/elchuko from Reddit.

The world of RPG dice is far more vast than one might expect. There are various options out there, and if you want something specific, you can probably find it.

However, one takeaway I would like to emphasize is that you don’t need any of these to play D&D or any other RPG. With so many free apps out there, dice (or lack thereof) should never be an obstacle in your tabletop RPG career.

Which are your favorite candidates for the best dice for DND (or other RPGs)? Let us know in the comments below.

Until next time, may you always roll crits.