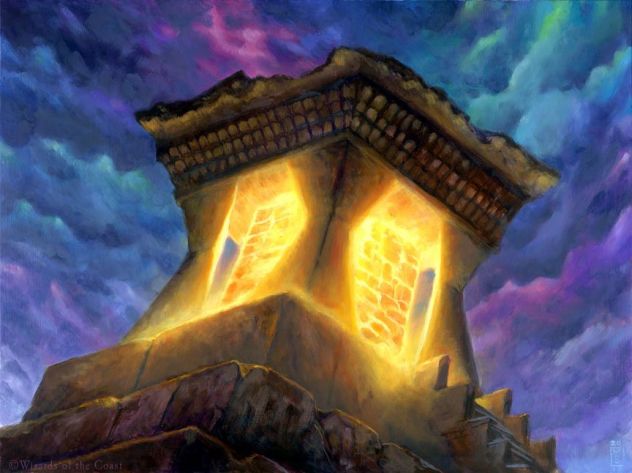 Double Masters have a ton of great reprints. The set may as well be called EDH Masters, as many popular commanders are making an appearance, such as:

However, today we’re going to focus on the Best Double Masters cards for Commander for the 99 instead.

Champion of Lambholt is a personal favorite of mine. It’s great in any aggro deck, and it’s easy to power it up in the early game.

Unlike Pelt Collector, for example, Champion doesn’t care about power – just about creatures entering the battlefield. This means tokens and mana dorks count, too. It can get very quickly out of hand and makes every threat you have near impossible to deal with.

Champion is great in any aggressive green deck, but sadly isn’t fast or self-sustaining enough to make the top 10.

Exploration is a much-needed reprint that is going to be in high demand. Playing an extra land each turn starting on turn 1 means you can ramp very easily into bigger threats.

Pair it with card draw and you will very quickly overcome your opponents. It provides a substantial amount of power early game, but does tend to be very dead late game, which is why it doesn’t make it higher on this list.

Baleful Strix should be an auto-include in any blue-black deck due to the sheer amount of efficiency it holds. For two mana you get a blocker that counts as removal, and you get to draw a card.

Those early game card draws are always important, and it replaces itself in the late game with the ability to big threats too.

Wurmcoil Engine can keep you alive by gaining life and keeping threats at bay. You can slot it into any deck, and you’d never regret it. At 6 mana of any color you get a 6-power creature with lifelink and deathtouch, which splits in half when it dies.

Even if you aren’t running a sacrifice deck with something like Daretti, Scrap Savant, it’s a ton of value, and you’ll make your opponents very sad if you’re able to recur it.

Boardwipes are an integral part of commander, and Blasphemous Act is one of the best ones in red. It may not say “destroy all creatures,” but with 13 damage, it might as well.

The main attraction to this card is its mana cost. Nine mana may seem like a lot at first, but in a four-player pod, its cost reduction clause could easily mean you’re casting it for one red mana. Even if you’re casting it for 4 or 5, it’s very easy to cast with only one colored mana symbol.

Speaking of boardwipes, Double Masters is re-introducing one of the best ones for white. Wrath of God is so well known that players often refer to boardwipes as “wrath-effects.

It’s a very simple and effective card that kills everything for four mana. The double white in the casting cost isn’t too restrictive in a format like commander where you’ll rarely be casting it on turn four. It has the benefit of stopping creatures from regenerating, in the rare case you encounter that.

I know we’ve just talked about two board wipes, but Austere Command is that and so much more.

Austere Command may cost more than Wrath of God, but allows you far more versatility in what you can destroy.

Dark Depths is a famous Magic card that you don’t want to see on the opponent’s side. It’s a mana dump that eventually turns into a massive, nearly unstoppable threat.

Marit Lage can be removed by exile effects. However, it serves as a good distraction – nobody’s going to waste their removal on your other threats when Marit is on the way.

You can also pair Dark Depths with something like Solemnity for a truly disgusting combo. You can get a 20/20 indestructible flier for 0 mana. If you get one, you’ll be happy to slot it into any deck with enough ramp to remove those ice counters (before your opponents draw into an answer).

White is heavily lacking in ramp, and Land Tax fills that void. If you have just one fewer land than any of your opponents, Land Tax gives you three basics. And if that opponent plays another land on their turn, then you get another three.

Playing Land Tax means you’ll never miss a land drop. However, because it only tutors for basics, it gets much worse the more colors are in your deck.

Mana Crypt is an explosive card that’s common to see in competitive decks. It’s a mana rock that gives you two mana for no initial cost. That makes it one of the best ramp cards aside from the fabled Black Lotus.

If you’re unlucky, Mana Crypt will drain you for 3 on each of your upkeeps. But that’s hardly any price to pay, when you can play your biggest threats before your opponents have a chance to react. It surely is one of the best Double Masters Cards for Commander.

Cards that you can cast for free are powerful, and counterspells are some of the best among them. They allow you to spend all your mana and still hold it up. Your opponents have no way to predict it and might think it’s safe to cast their expensive threats.

Among the free counterspells, Force of Will has perhaps the least restrictive alternate cost. All you need is 1 life to spare and another blue card which, if you’re playing Force of Will, you certainly have access to.

You’ll be very lucky to pull one of these, and you’ll want to slot it into decks that need a lot of protection. Bonus points if you cast Force of Will by exiling another counterspell, just to flex.

Masters sets are expected to contain a series of great reprints, and Double Masters is going to deliver. It’s packed full of Commander staples, so you might want to pick some up.