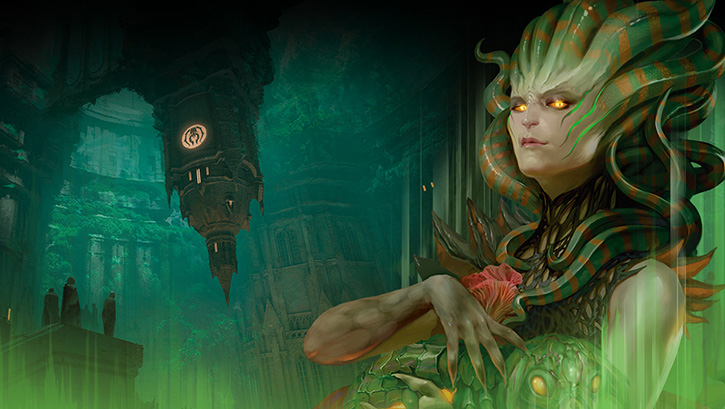 There’s a lot going on with this card. Okay, a 6/6 Beast with Hexproof for just four mana? There must be some kind of downside, right?

You can’t cast noncreature spells. We can build our deck in a way that this won’t be too bad. We’ll just play a bunch of creatures, that’s probably what we wanted to do in green anyways.

For two mana any player can turn off all abilities of Ferox. That means that all your opponents spells targeting Ferox basically cost 2 more two cast. And if you want to play a noncreature spell, you just have to pay two more mana. Not bad at all.

But wait, there’s more – if your opponent tries to discard you Nullhide Ferox, you just get to put it directly into play! This is insane, and especially good against cards like Liliana of the Veil. This Beast is a real deal and a great addition to any green deck.

Forget Hydras – Wurms are the biggest creatures in Magic. This one is bigger then Autochthon Wurm and Worldspine Wurm. Even Emrakul, the Aeons Torn can’t live through blocking it. If you hate how your opponents always kill your biggest creatures, worry no more. Greatwurm comes with indestructible and therefor doesn’t die to Doom Blade.

It costs 10 mana but when you have some creatures the cost can quickly be reduced. With just 3 creatures you are only paying seven mana for 16/16 indestructible. And if you have ten creatures – at least three of them green – the wurm comes with no cost at all.

Talking about cost, you won’t find this in Boosters – it’s only available as a buy a box promo. So check with your supplier if you can get one when you buy a box. Otherwise it will probably be available at Amazon after the Guilds of Ravnica releases.

This is the best card in the set – it might even be a best card printed in whole year of 2018. It will see a lot of play in Modern, Legacy, Commander and Standard. It will single-handedly change the Modern metagame. You will be able to destroy anything for just two mana. Sure, they’ll get a basic land, but you got rid of their Teferi, Hero of Dominaria.

Notice that the card doesn’t say nonland permanent. That’s right you can totally destroy Tron lands (Urza’s Tower). It’s not secret that this card will be good and therefor quite pricey, but you  might still open one in a booster.

Ral Zarek is back! This time he cares about number of instant and sorceries you have in graveyard and in … exile? The reason for this is the Izzet mechanic Jump-Start  – you can cast a spell from your graveyard by exiling it and discarding a card from your hand.

If your deck is filled with cards that support him, Ral can be an awesome Planeswalker. Card advantage, removal and game winning ultimate – check, check and check.

Legion Warboss is Goblin Rabblemaster‘s long lost cousin. Both goblins are one man army, giving you plenty of tokens to overwhelm your opponent. Warboss feautures new Boros mechanic Mentor. Whenever a creature with Mentor attacks you may put a +1/+1 counter on target attacking creature with lesser power. So not only does Warboss make a lot of hasty goblins, he also makes them bigger.

Don’t forget about some other powerful goblins that you can pair with him even in standard – Siege-Gang Commander, Goblin Trashmaster are both very powerful and can provide a use for goblin tokens.

It’s not shocking that we get some of the best reprintable dual lands in Ravnica, the home of shock lands. Reprint is a very welcome one since this lands are staples in many formats including Modern and Commander.

Shock lands will pair very nicely with check lands (like Sunpetal Grove) in Standard. Together they’ll make a very good manabase for two color decks, that will get them. We only get five of them in this edition, the other five will come in January’s edition Ravnica Allegiance.

Emmara, Soul of the Accord

Emmara gets you a lot for only two mana. You get a mini Brimaz, King of Oreskos. She works really well with Selesnya mechanic Convoke. You may tap any number of creatures when casting a spell with convoke. For each creature you tapped, the spell cost one less.

Because of this mechanic you can often tap Emmara without exposing her to combat. And you get a 1/1 lifelinker which ccan help you cast your future convoke spells.

You might also want to try Emmara in a green-white legends deck featuring cards like Shalai, Voice of Plenty, Mox Amber and Weatherlight. Crewing a vehicle is another way to safely tap Emmara.

If you like Commander, you can check our Top 10 Commander Cards from Core 2019.