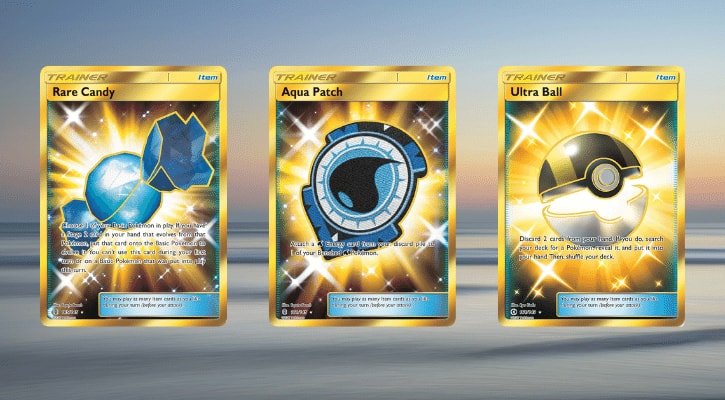 Trainer cards can be crucial in any Pokemon deck. We’ve already talked about the best Supporter Trainer cards, so today we’ll talk about the best Item cards in Pokemon TCG. While they are usually less powerful than Supporters, you aren’t limited to one per turn. You can play as many as you want in a single turn.

Trainers tend to make up at least half of every deck. They’re the oil in the deck machine that makes all the other cards work. Trainer’s Mail is like oil for that oil. Having the right Supporter for a turn or access to a Pokemon searcher can be the difference between winning and losing a game.

Trainer’s Mail looks at the top four cards of your deck and grabs a Trainer card. (As long as it isn’t another Trainer’s Mail.) Sometimes you’ll get lucky and have the pick of multiple Trainers. However, even revealing one other Trainer isn’t much of a loss. Even on a whiff, Trainer’s Mail doesn’t discard the other cards, so you won’t accidentally miss out on important cards while digging through your mailbox.

Enhanced Hammer is the big brother of Crushing Hammer, trading a coin flip for the restriction of only removing Special Energy. While this card does nothing against a deck without any Special Energy, when it has targets, it always hits.

Crushing Hammer hits every deck, but 50% of the time it won’t do anything for you. I’m not a big fan of coin flip cards, and I’d bet at least 50% of decks play Special Energy. So the odds are about the same on it working. But against decks that only play Special Energy, this card is a beating. How useful Enhanced Hammer will be depends on the metagame, but it can easily slot into decks if needed.

A card that searched your deck for three cards to put into your hand would be broken. For a deck with enough recursion to treat your discard pile like your hand, this can be that card. You can grab Supporters to return with VS Seeker, or energy to attach with cards like Dark Patch.

It also works well if you need specific Pokemon in the discard pile, either to power up a card like Vespiqueen, or to cheat it into play with something like Maxie’s Hidden Ball Trick. At absolute worst, this card can take three cards out of your deck you’d rather not draw.

What makes this card so, uh, special is that it’s the only effect of its kind. A lot of decks play Special Energy, with some only playing Special Energy. When you’ve only got around six energy cards in your whole deck, running out can be a very real problem. This gives those kinds of decks a glaring weakness to Energy removal unless they’ve got this.

Special Charge only shuffles two Special Energy back into the deck, meaning you’ve still got to draw them. If your deck is already reliant on Special Energy, you’ve likely already got good ways to search them out of your deck. Special Charge fits perfectly, and gives you a fighting chance in otherwise lost games.

Having a deck with Stage 2 Pokemon can be difficult. You’ve got s6-10 cards that do little to nothing without each other. Even, if you draw all of them you still have got to wait to evolve them all. Rare Candy makes these strategies viable.

Rare Candy requires you to have the Stage 2 Pokemon in your hand and the Basic it evolves from already out. This won’t always happen, but successfully pulling it off is one of the best feelings in the TCG. A focused enough deck really built around a Stage 2 evolution might forgo the Stage 1 entirely. Rare Candy takes practice to use effectively, but it can be well worth it.

Scoop Up Net looks fairly innocent at first glance. It just lets you pick up a non-V or GX Pokemon from play back to your hand. But this card has a number of very powerful uses.

It can act as a Switch that also heals any damage the Pokemon had. If you had a rough opening hand with only basics that you don’t intend on playing, (like a Mad Party deck for example,) Scoop Up Net can free up that spot on the bench.

However, the most powerful uses of Scoop Up Net is reusing the on-play abilities of Pokemon. For example, Galarian Zigzagoon’s play ability puts one damage counter on a Pokemon, and with enough copies of those and Scoop Up Net, you could potentially knock out an opponent’s Pokemon on the first turn – with no attack needed. The combo potential for this card is limitless.

Max Elixir is the powerful exception. Sure, it’s restricted to putting basic energy on your basic benched Pokemon. However, considering that most big attackers you’d want to have energy on are Pokemon-V or GX, which are basics, it’s a small drawback.

In a well-built deck Max Elixir can consistently find energy, and if you’ve got a way to guarantee an energy in the top six it gets even better. If you’ve got a deck with mostly basic energy, Max Elixir will power it up.

These powerful energy accelerators share a spot as they’re almost the same card. Metal Saucer attaches a Steel energy from your discard pile to one of your benched Pokemon, and I’m sure you can guess which energy Dark Patch or Aqua Patch returns. Getting energy in your discard pile can be done easily, and will happen naturally over a game.

These Items can set up a backup attacker or gain energy advantage on an opponent. That’s without needing a successful coin flip like Turbo Patch. If your deck has plentiful access to Switches or cheap retreats, these cards can even enable strong attacks your opponent won’t see coming.

As such, these are one of the best Item cards in Pokemon TCG.

Having the right number of Supporters in a deck is tricky. You want enough to be able to play one per turn, but not so many that your hand is flooded with Supporters. Four copies of VS Seeker might relieve that trouble.

Cards like Boss’s Orders that switch the opponent’s active Pokemon are good, but decks don’t want four copies of it. VS Seeker ensures you’ll be able to have the right Supporter more when you need it and less when you don’t.

We’ve reach the best Pokemon Item card. A staple of every Pokemon game from the mainline games to Pokemon Go, Ultra Ball is just as good in cardboard form. For the low cost of discarding two cards from your hand, this card searches up any Pokemon in your deck. It can finish evolution chains, enable Pokemon combos, or just search for a utility card. All of which can make up for having to discard two cards.

As we’ve seen from other cards in this list, having to discard isn’t always a drawback. Cards are often better in the discard pile than the hand. Additionally, more often than not you’ll happily trade two cards in your hand for a Pokemon of your choice.

That’s all about the best Trainer Item cards in Pokemon TCG. Which one is your favorite? Let us know in the comments below.

If you’re looking for more Pokemon articles, maybe some of the following ones might be interesting to you:

Until next time, have fun and get many wins with your powerful Item cards.