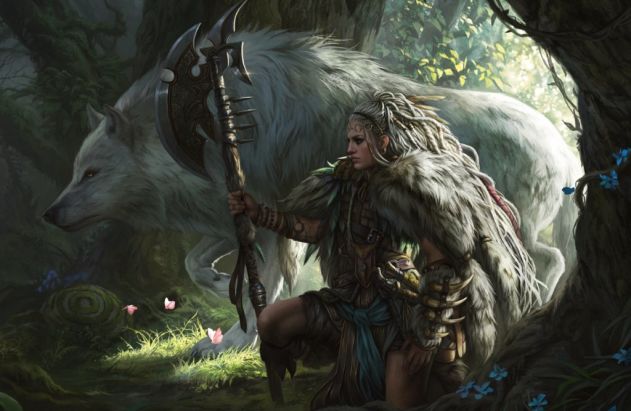 Jumpstart is packed with of a lot of great tools. Not only does it feature tons of fantastic reprints, but it introduces some great new cards too. Today we’re going to discuss the best new cards Jumpstart brings to Commander, both as commanders, and in the 99.

Zurzoth’s design suggests it wants to swarm the board with little annoying Devils. I was intrigued at first, but after some thought I wasn’t as impressed with it as I was initially.

On its own red has few wheel effects. (Wheel effect: each player discards their hand and draws 7.) That’s exactly the mechanic I’d like to see in this type of deck. It could lead a devil tribal deck, but it would need to be aggressive to fully use Zurzoth’s effects. However, mono-red commander tends to be very vulnerable to disruption.

While Zurzoth seems interesting and could make for a fun casual Commander or toy in the 99, it feels too unsupported to make it into the top 10.

At first glance, Release the Dogs might seem like a strange card to include in this list. It’s just a random uncommon. In practice, however, it will be an incredibly efficient card.

For four mana you get four bodies, and four triggers of your enter the battlefield effects: consider Emiel the Blessed or Cathars’ Crusade, both of which are also in Jumpstart. Now imagine having those on the battlefield along with Branching Evolution. Those four 1/1s are now very, very big puppies.

This card is efficient on its own but can be an absolute powerhouse if you have even a little support for it.

Emiel is the first commander for objectively the best tribe in Magic, but unlike cards like Muxus, Goblin Grandee, it has applications past a tribal plan. It both flickers permanents and is a payoff.

As a commander, white-green does leave out some of the best blink payoffs in blue and black. Blink decks generally don’t care about putting counters on creatures. It’s important to note that Emiel’s blink ability only works on other creatures, so you’ll need to find other ways to protect your commander.

In the 99, though, it serves as an efficient blink tool to dump your mana into. It fits into most white – green decks and can make your creatures larger in a pinch. Overall Emiel isn’t an engine on its own, but it would serve well in the 99 as yet another blink tool.

Kels, on the other hand, is card that supports itself. As a commander, it can easily lead a blue-black sacrifice plan. It’s both a sacrifice outlet and payoff at the same time – without a downside! Even more – for just two mana you can:

As a result, Kels’s ability makes it very difficult to remove. Sadly, you can’t use it in decks like Meren of Clan Nel Toth or Korvold, Fae-Cursed King, because of the hybrid cost in the rules box. Nevertheless, Kels is a monster of a card you’ll want to include in any sacrifice deck you build. (As long as it contains blue and black.)

#7 Neyith of the Dire Hunt

Neyith is fantastic big red-green card both as a commander and as a tool in the 99. Neyith allows you to turn your 10/10 Hydra into a 20/20 and forces your opponents to throw creatures in front of it. I see it in a Hydra-tribal or trample-tribal deck with cards like Apocalypse Hydra or Quartzwood Crasher.

There is one limitation to Neyith: you are legally obligated to play Core Set 2021’s Unleash Fury, because with Neyith it turns your 10/10 Hydra into a 40/40, which is too good to pass up.

Neyith is a powerful tool you’ll want to put in most of your big red-green decks.

Minotaurs have been getting a lot of attention in recent years, with several good additions to the tribe in black-red colors. It’s finally a viable strategy, and Sethron is absolutely the best commander for it.

Each Minotaur you play gives you another 2/3 Minotaur. On its own Sethron gives you 6 power and 7 toughness for 5 mana, which is the definition of efficiency. Sethron’s ability allows you to pump your creatures, makes them harder to block, and (as if it needed more), gives them haste. For eight mana (with nothing on the board), you can immediately swing in for 8 damage and keep two bodies for your trouble.

Sethron is perfect for an aggressive Rakdos deck. It’s powerful on its own and can be somewhat viable in the 99 even if you’re not looking to build Minotaur tribal.

Ormos is another powerful card on its own. It’s a 5/5 flyer for 6 mana with a powerful draw ability. Drawing five cards is no small thing, and in a singleton format like Commander, discarding three unique cards is never difficult.

Ormos allows you to shift through your deck quickly. It’s also a very useful card in late game. You can use use it to throw away your dead cards to draw into your combos and finishers.

Its second ability is alright – it keeps you from decking out – but swinging in with a flier isn’t the best win condition, when you’re guaranteed to lose if it gets removed. In that case you’re better off with cards like:

Nevertheless, Ormos can still be a safety net for that plan. All in all, it’s a great tool as a body, a card draw engine, and as a back-up win condition. You’d be happy to include it in your blue Commander decks.

Speaking of blue and drawing out your deck, Bruvac is a fantastic new addition to the format. Despite Commander having so much access to mill strategies, mill decks are rarely successful, especially in a four-player pod. With 100-card decks that means you have almost 300 cards to mill.

That’s very difficult to do when you’re focused on surviving, especially against more focused and aggressive decks. Bruvac allows you to mill your opponents twice as fast, which means mill might actually be a viable strategy.

Bruvac is an absolute must in any mill deck. You’d likely want to play it as commander, because it’s such a vital card to the strategy, that you want as much access to it as possible.

Tinybones is an auto-include in any discard plan. Not only is it the cutest card in the set, but it draws you cards each turn if you can make your opponents discard. It also serves as a mana dump to punish your opponents whose hands you’ve successfully emptied. At two mana you can cast it early, and you’ll rarely feel bad about paying Commander tax.

The biggest downside to the card is that it doesn’t force a discard on its own, so it needs support. Personally, I’ll be slotting it into my Grixis discard deck, which already has enchantments like Bottomless Pit to enable Tinybones’ ability on my opponent’s turns.

Scholar of Lost Trove is an interesting card to review. It’s easy to consider it a bad Torrential Gearhulk. I couldn’t say whether it’s more or less powerful, but it’s a very different card. While Scholar costs more and lacks flash, it can also recur sorceries and artifacts, which makes it more versatile than Gearhulk. Scholar also has flying which makes it more useful as a body.

While Gearhulk tends to be better in decks focused around specific instants you want to recur, Scholar gives you more options and seems more useful in a wider variety of decks, especially graveyard-focused ones.

I’m very comfortable contending that Branching Evolution is the most powerful Commander card from Jumpstart. +1/+1 counters are used in many decks, and you always want more tools to multiply those counters.

At only three mana this is a very powerful effect. You’ll always be happy running this instead of or in addition to Doubling Season. It fits in a go-wide deck with Cathars’ Crusade, into a hydra-tribal deck, and can double-up on your proliferate effects cards like Atraxa, Praetors’ Voice.

Notably, Branching Evolution doubles only your +1/+1 counters, so it won’t be as versatile as Doubling Season. However, that doesn’t change the fact that Branching Evolution is the biggest powerhouse of the set, and you’ll definitely want to pick one up before the price skyrockets.

Where to Get Jumpstart?

Jumpstart is a great way to play Magic. You and your opponent each get two packs, mash them together and you’re ready to play. You can find out more about Jumpstart here.

As you saw, it contains plenty of great Commander cards – and that’s without counting in reprints! Here are just some of the reprints you can get in Jumpstart boosters:

Anyways, you can order Jumpstart on Amazon.

Jumpstart introduced a lot of great cards to Commander. As you saw from #9 through #6 I’m a big fan of the hybrid legendary creatures. While some weren’t quite good enough to make the top 10, I think they featured fantastic design. I’m excited to find how they fit into my decks, and more excited to see what others manage to brew with them.

Until next time, may you draw as many lands as you need, and never more.