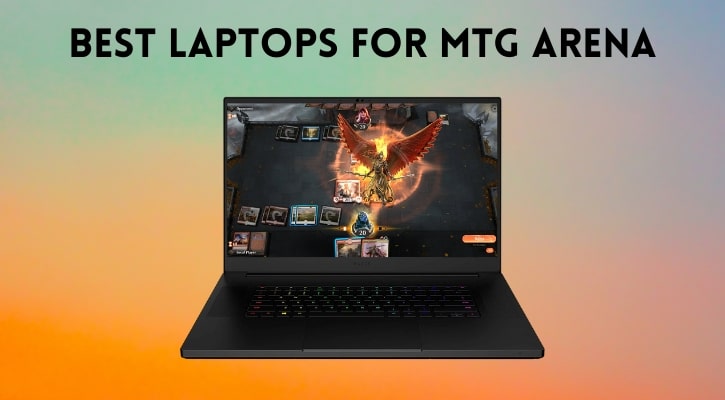 You sit before your old laptop and try to play some MTG Arena. After a game or two, Arena starts to lag. You close the game. You open it again. Wouldn’t it be nicer to just play for an hour or two — without restarting?

Well, it might be time for a new laptop. We have picked the best Laptop for MTG Arena at a very reasonable price. Enjoy Magic the Gathering with zero lag.

Here are official MTG Arena computer requirements. If your computer doesn’t reach recommended ones, that’s the reason for your lag issues.

The two most important attributes for a laptop or PC for MTGA are:

Although Arena doesn’t seem too complex of a game, there are plenty of complaints about memory issues. Because of that, Arena doesn’t necessarily run smoothly even though your computer meets recommended requirements.

For that reason, it’s probably a good idea to aim above those requirements. We took this into consideration when picking the best laptops.

If you played lots of MTGA, you probably know that the battlefield can get pretty messy at times. Occasionally both players will have lots of creatures. It can be hard to handle combat on a small screen.

That’s why we took screen size into account — while still recommending laptops that are not big to carry around.

In this section, we’ll take a look at two options. The first one is great if you don’t want to spend too much money, but you want MTGA running smoothly. The other one is better, particularly if money is of no concern, and if you also want to play other high-end games on your laptop.

There were reports of lags on MTG Arena. But that’s not to worry with this bad boy. As you can see in the table, it surpasses all recommended requirements for MTG Arena. Therefore, making your games run very smoothly without the need to restart the game every hour.

MSI’s GF63 is a great high preforming laptop for gaming and yet reasonably priced. Even if you enjoy more graphics-heavy games, GF63 will hold its own. While it’s not the newest model, it’ll still preform well enough for a fair price.

If you want a laptop that will enable you to run not only MTGA, but also every other game imaginable, here’s one for you. Razer Blade Pro 17 is one of the preforming laptops even for triple A-games at the highest settings.

So if you want to play anything on your laptop, this one is certainly an amazing choice. Just look at those specs.

If you’re looking for a PC to play MTGA on, we have a couple of great recommendations for you.

If you like Magic, you like value. The CyberpowerPC is packed with it! It has great parts, that would somehow cost you more if you bought them separately.

You’ll also get a mouse and a keyboard included together, so the only thing you’ll need is a monitor. It’s truly one of the best buys for under thousand dollars — you can check its price on Amazon.

If you want to play other games with higher PC requirements, CyberpowerPC will manage it. It’s also liquid cooled, which will enable overclocking it.

Do you want to get a computer that will hold its own for quite a while? MSI Aegis RS 11th Gen is certainly a fine option to consider.

It’s not cheap. That’s for sure. But the price doesn’t lie. It will run Arena better than your current computer runs a calculator. Any other game you can possibly imagine will run incredibly smoothly on this machine. If you want the absolute best on the market, this is a right choice for you.

As you know, the battlefield can get clogged up quite quickly — especially if you’re playing a deck with lots of permanents. That’s why you should really pay attention to the size of the size monitor. Take a look at these two beauties.

ViewSonic VP2458 has a couple of things going for it. Its 24-inch screen is big enough even for a very full battlefield, and its price is a real steal. It has a resolution of 1920 × 1080 which is still passable for a 24-inch screen.

So if you want a display that’s both big enough and affordable, no need to look for anything else.

Maybe even 24 inches isn’t enough for you. If that’s the case — LG has an answer. This monitor really excels with its 27 inches.

This screen will provide the comfort for long nights of playing MTG Arena. It won’t protect you from seeing your worst matchups, but your eyes will still be thankful.

It has a resolution of 2840 × 2160, which is great. Bigger resolution is very important on a big screen like this one.

When you’ll be playing Arena on your new device, don’t forget to check MTG Arena Codes for free packs and cosmetics.

Hopefully we helped you picked a right computer for you. Happy gaming on Arena, and may you only draw lands when you need ’em.