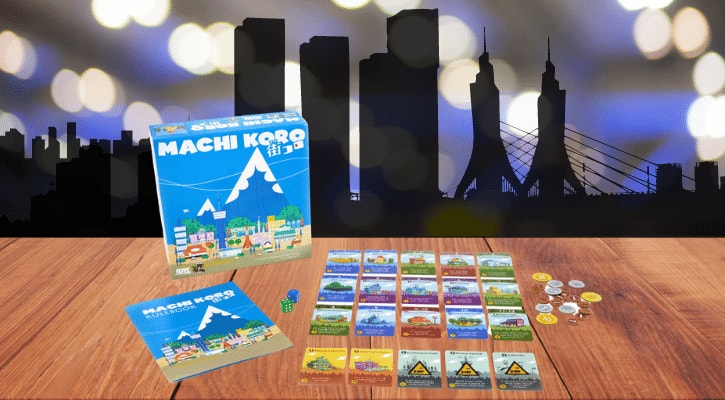 Are you looking to start playing Machi Koro, but don’t know which set to start with? Perhaps, you know the base game, and are looking forward to getting some of the best Machi Koro expansions? Whichever the case, I can help you with it.

In this article I’ll talk about:

If you’re in a hurry, here’s a quick recap of the best Machi Koro products you can get.

However, if you do have time, we’ll discuss all expansions in more detail. But first, let’s talk about what Machi Koro actually is. (If you’re a more experienced player, feel free to skip this next section.)

What is Machi Koro?

Machi Koro is a fast-paced and family-friendly board game created by Pandasaurus games. While sabotaging each other, you and 1-3 other people strive to achieve the same goal – develop the city. The game lasts about thirty minutes, and there’s almost no setup to be done. The rules are simple, but over time, the strategy can become more complex.

As the game progresses, you develop your city realistically. You may start with wheat farmers, but you can later use that wheat in your bakery or other businesses. Then you may use the money from those businesses to fund a stadium.

You have to make careful decisions based on what developments to focus on, how to capitalize on the markets your opponents are ignoring, and how to interfere with your opponents’ plans.

Machi Koro comes in a small box with:

This board game doesn’t actually use a board, nor are the other components heavy. So, this makes Machi Koro a good one to pack over to the board game night.

There are two types of these cards. Let’s look at them in more detail.

Establishment cards have a variety of types as well:

Supply cards provide you resources from the environment. Each Supply card has a number associated with it. At the beginning of each player’s turn, they roll the dice. If that number is rolled, that player gets the benefit of the roll.

Throughout the game, you have different options about strategy. You can focus on one number, and get a huge benefit when you roll it. Or you can spread out your investments, and get a trickle each turn. The more often you roll on your Supply cards, the more money you make.

Your goal is not just to amass wealth, however. There are four types of Landmarks, and your goal is to construct each. The first player to construct each Landmark wins. There is no particular order in which you’re required to build them. Furthermore, the more powerful ones become progressively more expensive to develop.

Each Landmark gives you a different and unique benefit. For example, allowing you to roll two dice instead of one, or earning you more money from your establishments.

As more players build Landmarks, the game becomes harder to strategize. Because you’re competing for resources, stealing from one another, and relying on a measure of luck from the dice.

One of the main drawbacks to the base game is the limited replayability. Once you’ve completed a few games, you find yourself falling into the same patterns, purchasing the same establishments, and so on.

Playing with different opponents helps resolve this issue somewhat. So, the creators have released a series of expansions to mix up the game and make each game that much more unique. These are only additions, so you still need the base game to play.

If you want both expansions, you can pick up the Machi Koro: Expansions set. It contains both the Harbor expansion and the Millionaire’s Row expansion. It also has many new resources, allowing you to play with a maximum of five people instead of four.

This is a great and cost-effective way to spice up your Machi Koro games and create near-infinite replayability.

The Harbor expansion adds 10 new establishments and 2 new landmarks. All are set in – naturally – a harbor theme. From building boats to running a sushi restaurant, the Harbor Expansion adds a much-needed sea breeze to the game.

The Harbor expansion also allows you to play with a fifth player. This can shake up the game on its own. Having a new competitor means you have to change your strategy to account for it.

The Millionaire’s Row expansion adds 14 new establishments that provide a great deal of variety to the game. Having so many new developments means you have to strategize a lot more.

Furthermore, it’s harder to follow the same patterns you have in previous games. There are now several viable methods of success, and you won’t find yourself playing the same game twice.

If you’re truly in love with Machi Koro, however, you’ll want to pick up Machi Koro Legacy. The sequel that’s everything you ever wanted.

Machi Koro Legacy builds off Machi Koro in this longer-format, more complicated sequel. Unlike the expansions, it’s its own game, containing everything you need to play. It’s a legacy game, which means it tells a story across a total of ten consecutive games. The gameplay format is the same. You collect resources, build establishments, and work towards constructing landmarks.

The most significant change from Machi Koro is the addition of the Legacy Deck. Players only draw from this deck when instructed to by the rulebook. This does wonders to shake up gameplay. It can grant you special abilities, new resources, or even change the rules of the game.

In order to win the game, there is another objective. Players must build three landmarks as normal. But instead of a fourth, players must contribute to a community landmark. So, if:

Then that player wins the game. Afterwards, a new game begins. This continues after ten games have been completed, taking direction from the rulebook and the Legacy deck.

For a more condensed, spoiler-free guide on playing Machi Koro Legacy, you can check out this video by the Rules Girl.

Unless you pick up the expansions, your replayability is quite limited. After your first few games, the base game might be sitting on your shelf for quite a while.

It’s also worth mentioning that while Machi Koro says it’s for 2-4 players (or 2-5, if you have Machi Koro: The Expansions), it’s perfect with at least 3 people, preferably 4.

With only two people, it’s very easy for one player to get lucky early on. And purchase all the good resources, or steal their opponents’ money, and either lock them out of the game or skyrocket impossibly far ahead. With 4 players, you can battle a little more fairly over resources, and no one tends to achieve a monopoly over any resources.

One of the best things about Machi Koro is its simplicity. Unless you’re playing the Legacy version, you don’t spend half an hour to an hour puzzling over the rulebook before you can play. Also, you don’t have to stop mid-game to double-check rules or contest rules interactions.

It’s very well laid-out and streamlined, so even newcomers can pick it up with ease. Indeed, the rules are only 6 pages long, and most of that features the game’s great art instead of text.

Machi Koro is definitely a game you’ll want to pick up. I love my complex and heavy board games. But sometimes it’s nice to have a game like this on the shelf to take down for a stress-free, easy, quick game with friends and family.

I would recommend starting with the base game to see if you like it. Then, if you want to play more, you can pick up Machi Koro: The Expansions. If you then decide you want to go further, and you are looking for a little more complexity and a longer-format game, Machi Koro: Legacy is a great pick-up from there.

Remember to check with your local game stores to see if they have Machi Koro in stock before you buy. Most game stores can also special-order games they don’t have in-store. Support them however you can!

Finally, if you’re looking for more board games, maybe the following articles will interest you: