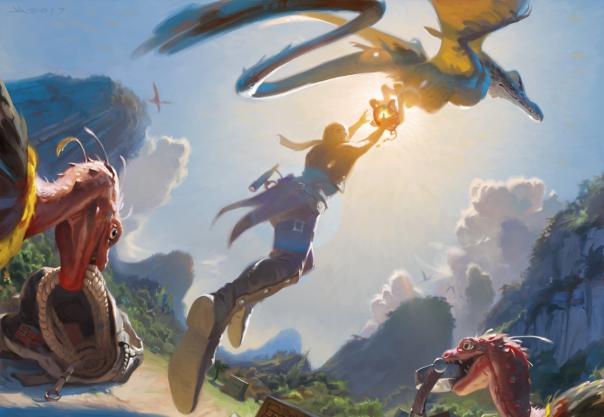 Today we’ll talk about the best MTG cards for Multiplayer formats. While these cards are not necessarily bad in a 1 vs 1 match, they become insanely strong when you have more opponents.

So let’s take a look at which cards you need to beat multiple opponents.

Expropriate is a sweet card. At worst you’ll get one extra turn and steal one permanent from everybody. Sometimes your opponent will rather give you an extra turn then theirs best permanent, in which case you’ll also be happy. There’s a lot you can do in two (or more!) extra turns.

Of course the biggest problem with Expropriate is its mana cost. If your playgroup plays more competitive decks and you don’t reach 9 mana very often, it’s sadly not the right card for you.

If you like taking advantage of your greedy opponents, you can tempt them with discovery. At worst, this will go get you any one land and put it on the battlefield untapped. Now depending on your play group you could get a whole bunch of lands in play.

In our experience players often decide to get a land, therefore making Tempt with Discovery one of the best 4-mana ramp spells for Multiplayer.

When do you want to destroy all creatures? Usually, when there are lots of creatures in play – and that’s when Blasphemous Act is at its best. It often costs just one mana!

It will mostly do the same job as Damnation for less mana. Besides that, it’s also more budget friendly. Since the board is often crowded in Multiplayer, this is a great addition to any red deck.

The newest card on the list is an uncommon from Throne of Eldraine. This black knight was already insane in draft, but now he’s ready to wreck some Multiplayer games.

Let’s break down that wall of text. Konrad deals 1 damage to each opponent whenever:

That’s a ton of damage in a regular Multiplayer game. Konrad does finish the game quickly.

Blantant Thievery is one of those cards that go from medium to totally busted, when you increase the number of your opponents.

For seven mana Agent of Treachery is already a fine deal in formats like Commander. Of course, that’s a creature and you can blink it and abuse in a number of different ways. However, once you add just the second opponent to the mix, Thievery becomes a better card.

Imagine playing this card against three or more opponents. It’s devastating and probably wins you the game on the spot. It’s a great addition to any blue deck meant for Multiplayer.

White ramp! It’s a white ramp and a good one at that. We don’t see many white cards like this anymore. Since its printing in Guilds of Ravnica (2018), Smothering Tithe has become a staple and certainly one of the best MTG cards for Multiplayer.

Don’t forget that the trigger doesn’t only happen in their draw steps, it happens every time they draw a card! Therefore it’s great against decks that draw lots of cards.

Blessed are the players, who didn’t hear the words “Did you pay the one?” over and over again. Rhystic Study is both incredibly good and incredibly annoying in Multiplayer.

Getting a Treasure token from Smothering Tithe is fine, but drawing a card is on another level. Not to mention, it triggers every time an opponent casts a spell. One mana might seems like a low cost, but it adds up so quickly.

That’s particularly true in a Multiplayer games. Your opponents are constantly casting spells and you’re constantly drawing cards – since they just can’t afford to pay one additional mana over and over again.

You should definitely play Rhystic Study, if you don’t mind annoying your opponents.

Prophet of Kruphix is so good that it’s banned in Commander. That fact doesn’t need to stop you from trying in in casual 60-card Multiplayer decks. Just make sure your deck isn’t too strong, then it becomes a bit boring for the rest of the table.

Anyways it definitely deserves a spot on our Top 10 Best MTG Cards for Multiplayer list.

For the second place, we’re actually cheating a little. We put a cycle of five cards here. It’ll certainly feel like cheating when you cast one of them against multiple opponents – they’re just so strong. Just make sure, you won’t play the Sylvan Primordial in Commander – it’s banned and that would be actual cheating.

As usual, the white card is the worst in the cycle. For seven mana you get to exile one creature per opponent. Useful, but could do better. However, the rest of Primordials are all pretty powerful.

Blue Primordial’s power ranges from fine to broken, depending on which instants and sorceries your opponents are playing. Consider what you’ll play against before putting Diluvian Primordial in your deck.

Steal a creature from everyone and smash! You’ll be able to take out at least one opponent. Make sure that you have some sort of sacrifice outlet in your deck if you’re playing Molten Primordial, so your opponents won’t get their creatures back.

The best Primordial is most certainly the green one. Not only does it destroy one noncreature permanent per opponent, there’s more upside. You get to search your library for a Forest card (not only basic Forest) for each permanent destroyed this way. It’s so good it got banned in Commander.

Finally, we’ve reached the best of the best MTG cards for Multiplayer – Torment of Hailfire.

At first sight it might seem like a durdly card, but it’s actual text is: “Do you have a lot of mana? Then win the game.” This card does absurdly well in the late game and it affects every opponent. It’s probably the single best win condition in Multiplayer games.

The only problem with Torment is that it isn’t very good in the early game, but then again – which finisher is?

Torment of Hailfire is certainly pretty popular, as its price tag suggests. You can check its price on Amazon.

There are so many good cards that get even better in Multiplayer. There’s no way that we could put all of them in our Top 10. So here are some strong cards that just missed our list:

Do you feel like we missed something good? That’s certainly possible, so share your best MTG cards for Multiplayer in the comments bellow.

If you enjoy Magic the Gathering trivia, we have more Top 10 lists for you. Check out the following:

Until next time, may you beat all of your opponents.