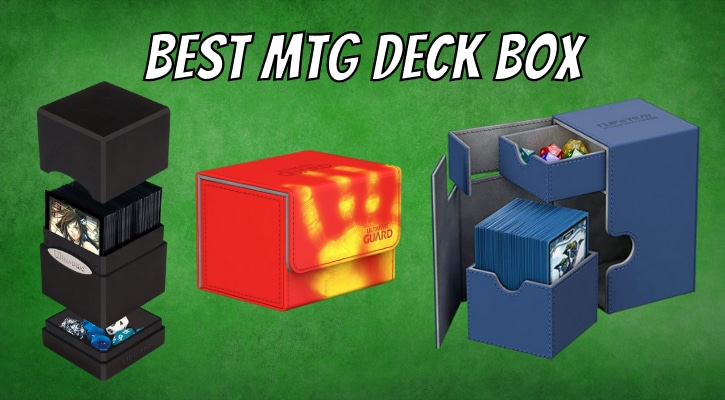 They are sorted in three groups:

If you’re in a hurry, here’s a quick recap of our three favorites, one from each group:

On the other hand, if you have time, and want to make a more informed decision, let’s take a look at various deck boxes and find the best one for you.

Commander deck box should be big enough to hold at least 100 double sleeved cards. Perhaps some tokens as well. It should also be durable. We considered both of those factors when picking our favorites.

Are you looking for a perfect deck box for Commander? This is the one.

Ultimate Guard makes some of the best deck boxes. Period. This Flip’n’Tray is no different. It’s sturdy, very well-built and will therefore last you for multiple years to come.

It has a satisfying closing system with magnets and a separate container for dice and counters. The box easily holds 100+ double sleeved cards. There’s also enough room for tokens. The surface of the box is really nice to touch, thanks to the XenoSkin design.

If you want a deck box that will serve you for a long, long time, look no further. You simply won’t be disappointed with this one. Besides, you can also choose a color that will suit your commander perfectly.

The Twin version of Flip’n’Tray has all the same qualities we mentioned above. As the name suggests, the box is double in size, so you can fit another Commander deck in it.

Despite its bigger size, it still has all the qualities you’d expect from an Ultimate Guard’s product. It will hold your cards safely, it’s nice to touch, and it will last for a lifetime, probably. So if you can’t decide which commander to take with you to your play group, this is the box for you. Take two Commander decks anywhere you go!

Do you need more in-depth information about it? Check our Flip’n’Tray deck box review.

Ultra Pro Satin Tower is cheaper than previously mentioned XenoSkin deck boxes. It’s not as nicely looking and has a less soft covering.

It is however quite bulky and very compact. If you don’t care that much about the looks, you can save some money with this one. It will still protect your deck perfectly fine, and it also has a compartment for dice and counters, which always comes in handy.

All in all, it’s a great product for its price, as it perfectly serves its main purpose of protecting your cards. That’s why you’ll often see in on the tables of Commander players.

Deck boxes with pictures on them are usually pretty bad. Colors wear off quickly, and you are left with a bad looking box. That’s why it is hard to get a flavorful deck box for your commander. Well, if you have a two-color commander, Ultra Pro has a solution for you.

They made a very high quality deck boxes designed with the guilds from Ravnica in mind. Each box has a guild symbol in the front, and a pattern of symbols in the inside. The colors are very vibrant and warm. The magnets hold it closed pretty strong, so it won’t open in your backpack by accident.

The deck box can hold 100 double sleeved cards plus some tokens. If you want to show your commitment to your favorite Magic the Gathering guild, this is the best product for you.

Ultra Pro 2 Piece Box has at least one thing going for it — the lowest price you can get. This is one of the cheapest deck boxes for Commander you can get. You can check its price on Amazon yourself.

Where’s the catch? Well, it isn’t the most durable one you could get. You’ll want to store it safely in your backpack and not give it too much space to move around. If you have an expensive deck, you should invest in a better deck box.

However, if you’re one of those players who just can’t stop building commander decks, this is a solid choice. You can use multiple 2 Piece Deck Boxes for storage at home. Just get one better deck box when going somewhere. This way you can have all of your decks neatly arranged and save some money as opposed to buying multiple high-end deck boxes. You don’t need to worry about the box opening in your backpack, as you’ll use the better one for traveling.

It’s also nice that they’re transparent. This way you can easily see which deck is which.

Make sure to order the right size. The 150-count one is actually great for 100 double sleeved cards and some tokens, so this would be probably the right one to get. If you just single sleeve your cards (or don’t sleeve them at all) you can fit them in the 100-count box.

Now we’ll shift our focus to the smaller deck boxes for formats such as Standard, Draft, Pioneer and Modern. Most of these boxes also come in a bigger size, so if you want to get a bigger one with the same design, you can do so.

The most annoying thing with deck boxes is often getting the deck out of it. Folks at Ultimate Guard solved it by simply putting the deck box on its side along with curved edges for easy access to your deck. This guarantees a really nice experience.

As we come to expect from Ultimate Guard deck boxes, it’s quality made and will serve you for a long time. It easily fits 60+15 double sleeved cards and comes in a variety of colors.

The Boulder deck box can definitely save you some money. It’s simple looking, compact deck box. The case is extremely hard, and it barely flexes when you try to squish it. If you just want a deck box that won’t fall apart, this is certainly a viable option.

Sometimes you don’t care about quality. You have plenty of cards and decks lying around, and you just want to get them in order. In that case, getting a pack of multiple deck boxes is probably the cheapest way to do so.

These boxes are obviously not the best quality, but they will still work just fine. They are also great for draft decks, which mostly contain cheap chaff cards. If you want a lot of deck boxes for low price, it’s hard to get a better deal than this.

On top of that, if you’re careful with them, they might even serve you for quite a while.

Do you want your deck box to really stand out at your table? Here are a couple of suggestions.

Okay, this one isn’t your regular deck box. It’s more of a wooden box for your other deck boxes. If you have multiple decks though and want something nice to store them in, this might be a good buy for you.

This one has the same qualities as previously mentioned Sidewinder:

ChromiaSkin is heat sensitive — its color changes whenever you touch it. This one easily holds a Commander deck, plus some tokens. However, if you’re playing 60-card formats (with 15 card sideboard), you’re better off getting it in a smaller size.

If you don’t like this specific red and yellow design, don’t worry. There are lots of two color combinations to choose from. You’ll surely be able to find something that you like.

Are you’re skeptic about how it actually works, and how it preforms in different environments? In that case, you should definitely read our in-depth ChromiaSkin Sidewinder review. In that article, we talk about box’s qualities and potential downsides as well.

Out of the Box

Hopefully you found your perfect MTG deck box. Do you enjoy one that we didn’t mention? Recommend it in the comments below.

If you’re looking for sleeves to go well with your deck box, you can find the best MTG sleeves here. You’ll be able to find some that won’t split easily and that will last for a very long time.

Maybe you’re picking the deck box for someone else as a gift? In that case, you might want to check our Magic the Gathering Gift Guide.

Anyway, that’s all for today, have fun and may you never forget where you put your deck box. (That happens so many times to me, but well, what can you do…)