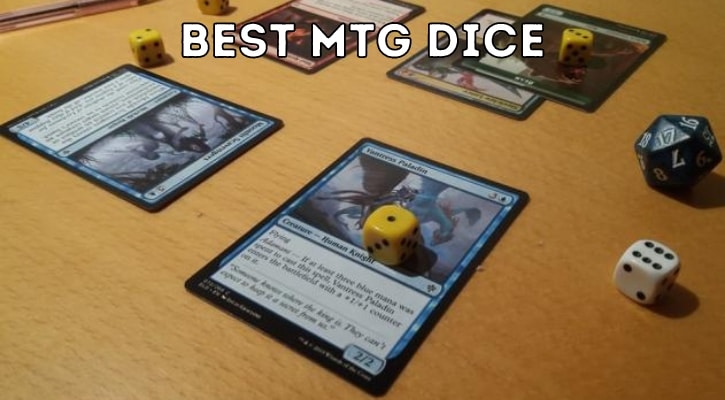 How do you begin a game of Magic? You roll a pair of dice. How do you represent counters of different kinds? With dice, of course. So naturally, every Magic player needs a set of his own. However, it can be hard to pick the right ones, since there are so many of them. That’s why today we’ll take a look at best dice for MTG, including some very special ones.

Of course, you don’t crucially need dice to play the game. Players often use small pieces of paper, coins, buttons or other stuff they have laying around. While all of these will do in a pinch, once that there are multiple items scattered around the battlefield, it can be hard to keep track of what is what.

“Oh, those two buttons are Goat tokens? I thought they were +1/+1 counters.”

To avoid situations like that, it’s best to have dice ready to go. There will certainly be less misunderstanding when you’ll use them.

How to Choose the Best MTG Dice?

So, how did we choose the best dice for MTG players? We’ve considered the following factors:

Quality is always important. You don’t want to have a dice with dots that will fade quickly, or a dice that might even break after you throw them. So the dice that we picked will serve you for a long time.

Price is certainly a factor. Thankfully, most of the dice here are quite cheap, especially since they are often bundled together and you get multiples. You’ll have a lot of them by buying just one big set, even if you lose some of them.

There are many types of dice, from regular, 6-sided ones to 20-sided ones, and that’s without mentioning special dices for Planeswalkers, etc. This is a factor that’s the most subjective on the list. Some players want their -1/-1 counters, while others just want regular dice. That’s why we provided multiple categories, so you’ll find the best MTG dice for you.

Most Magic players use regular 6-sided dice. Their biggest benefit is that they’re harder to accidentally move. That’s a big downside of some other types of dice, especially D20s.

These can be used for all sorts of counters from +1/+1 to loyalty counters. They are also most used ones for determining which player will start the game.

If you want a simple set of dice, that will last you for forever, just go with dice from Chessex. They come in a plain and simple box, which while is a bit fragile, it’ll keep your dice in order. There are 36 of them, which is usually more then enough for even the most chaotic Commander games.

The brand has been around for a long time, and their quality has become expected.

Final benefit of these dice is that they come in variety of colors. The one you saw above has an overflow of blue and black, but there are dice in single colors too. You can browse Chessex’s dice on Amazon.

All in all, if you’re just looking for a set of dice, that will let you play MTG more comfortably, you can’t go wrong with Chessex.

If you can’t decide on which color to get, or if you’re still afraid that you’ll run out of dice, Yellow Mountain’s dice are the way to go.

As you can see, you get whole hundred of them, in ten different colors. You also get a handy bag to carry them around easily, and without fear of it falling apart. These are the same size as aforementioned Chessex’s dice (16 mm / 1.47 inch), which we’ve found to be a perfect size for Magic dice.

The colors that you get are:

Different colors become real handy if you want to

Are you using a lot of different types of counters? Dice in this section will help you make the battlefield more transparent. Great for long games of Commander.

If you want to have your planeswalker dice in style, here’s your solution. As you can see they came in five colors of Magic and each number is inside a symbol for loyalty on Planeswalker cards. Pretty neat.

No more messing with the difference between -1/-1 and +1/+1 counters. These dice are a must for everyone who uses both kind of counters. Hapatra, Vizier of Poisons loves them.

Looking for some special dice? We have some suggestions.

Hexatec definitely has some special dice. These are heat sensitive and change color, but you also have some that glow in the dark. Click on the image to check their price on Amazon.

A Bit of Everything: Wiz Dice Cup of Wonders (Box of 35)

Not sure what to get? Just grab this big box of everything.

You’ll get 35 polyhedral dice. Five of each:

Maybe not the most common one for Magic, but if you’d like to get a bunch of different dice, this is a way to do so.

Looking for something more shiny? These dice are made from solid brass, and have a real nice feel to them. They came in an impressive looking box and are a great idea for a gift. Maybe even for a gift to yourself?

That’s all about best dice for MTG. If you’re looking for more reviews for Magic the Gathering accessories, you might want to check some of the following:

Until next time, may you always win the die roll.