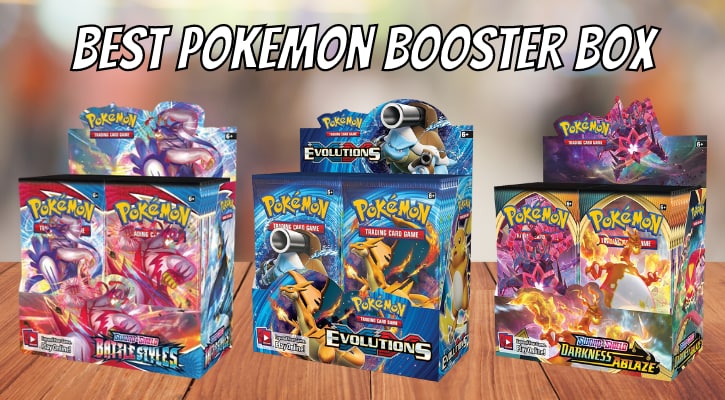 This article has different recommendations for different types of players. Besides each booster box, you’ll also find some of the most iconic cards that you might get. This way, you’ll have an easier time deciding which one to get.

If you’re in a hurry, here’s a quick recap of the best Pokemon booster boxes, based on different criteria.

With all that said, let’s get right to it and find the booster box you’ll enjoy the most. We’ll start with the newest one.

It also contains the powerful Gigantamax Pokemon. The two most notable ones are certainly Gengar VMAX and Mew VMAX, both of which are featured on the booster box packaging. Their alternate art secret rares are among the most valuable cards from the set.

All in all, Fusion Strike is certainly one of the best Pokemon Booster Boxes to buy, and you really can’t go wrong with it.

Darkness Ablaze – Has a Chance of Charizard VMAX

The biggest draw to this box is a chance of getting Charizard VMAX, which is — as we came to expect from Charizards — a valuable collector’s card.

However, Charizard isn’t the only big Pokemon in the set. There are a bunch of Pokemon V. The most notable is surely Eternatus V. Among many other cards, it also has an even bigger VMAX version, which is pretty spectacular. Check it among the iconic cards from this edition.

So if you want to get lucky and open a Charizard, or at least some very powerful Pokemons, you should just get the Darkness Ablaze booster box.

Do you just want to buy a Pokemon booster box to get some nostalgia about the good old days? Do you want your Pokemon card to look like they used to, without the modern design? If so, you’re going to love XY Evolutions.

It’s the fifth and final set from the XY Break Series, but most importantly, it marks the 20th anniversary of the franchise.

That’s why it includes plenty of reprints from the very first Pokemon Set (Base Set), with old designs — with just a few minor adjustments. Nevertheless, there are still some powerful cards with new designs. However, even those are featuring old favorites, like the final evolutions of the original starters — Charizard, Blastoise and Vanusaur.

So if you want to buy one Pokemon Box to get a maximum nostalgia hit, you should definitely get XY Evolutions. You could even get the Surfing Pikachu!

Are you when deciding which Pokemon booster box to buy, and you just want powerful cards? If so, you should get Unbroken Bonds, it probably the box with the most powerful cards that was released in the last couple of years. That’s why it’s pretty sought after, which is reflected in its higher price (check on Amazon).

There are a bunch of strong GX Pokemon, both single versions and Tag Teams. Dedenne GX is probably the strongest of the bunch. When you play it, you get to discard your hand (which will often be close to empty by then) and draw 6 new cards. That’s a lot, and you can also have some sweet synergies with discarding.

Even if the name suggests otherwise, some cards in Broken Bonds are, in fact, pretty broken.

Evolving Skies is an amazing Pokemon Booster Box if you like dragons, as the set features many powerful Dragon type Pokemons. The main one is certainly Rayquaza VMAX, which has an insanely powerful ability, Azure Purse. Once per turn, it lets you discard your hand to draw three cards.

But that’s not the only Dragon type you can get. There’s also Duraludon VMAX, Dragonite V and many more! Of course, you can also expect VMAX Pokemons of other types. Players who liked Rapid and Single Strike cards from the previous two sets, will also get some sweet cards here as well.

As you can see, there’s something for every kind of player in the Evolving Skies booster box. Plus, it’s still a newer product, as it was released in August 2021. That’s always fun and exciting. A great pickup!

Speaking of Pikachu, its fans will probably be the happiest about this booster box, as it features Pikachu V and Pikachu VMAX, both of which can be pretty powerful.

Additionally, Vivid Voltage It’s got something for everyone — strong Pokemons, good Trainer cards and amazing Secret Rares. Before its release (on November 13th, 2020), it was one of the more heavily anticipated booster boxes.

You can find more of the best Vivid Voltage cards here.

The Battle Styles is the first expansion that features two new card variants: Single Strike and Rapid Strike. Single Strike cards usually have more raw power, and have attacks that can Knock Out other Pokemons with a single attack. On the other hand, Rapid Strike cards are often sneakier and use technical attacks.

All in all, Battle Styles feature plenty of interesting and powerful Pokemon cards, including some strong Trainers. However, if you’re a fan of the early Pokemon generations, you’d be better off buying another booster box, as this one doesn’t contain the most iconic Pokemons from the early years.

Chilling Reign set brings you even more Rapid Strike and Single Strike cards. Pokemon TCG fans are most excited about the powerful V and VMAX Pokemons. You might get some of the three famous legendary birds — Articuno, Zapdos and Moltres. This time around, they have Galarian forms.

However, the most chased card in the set is Blaziken VMAX, which is incredibly strong and has an amazing Secret Rare version. It’s a card that works best in a dedicated Rapid Strike deck.

Anyway, if you’re deciding which Pokemon Booster Box to get in 2022, Chilling Reign has a lot of upsides. It’s still relatively new (released on June 18th, 2021), and it has powerful cards — that’s usually a great long-term prospect. Additionally, since it has so many valuable cards, it’s also an exciting box to buy, if you’re just planning on opening Pokemon packs.

You can find more of the best Battle Styles cards here.

Sun & Moon Edition introduced Pokemon-GX. Each of these Pokemon has a GX attack. That’s an attack so powerful that you can only use one of them per game!

So if you’re a fan of the GX Pokemon and you want to get some very first Pokemon-GX, this is the right booster box for you. You can find some really awesome cards in these packs, such as Lunala-GX and Solgaleo-GX.

Let’s check some of the more iconic cards you might get in this booster box.

Team Up is the first expansion that featured Tag Team-GX. These card feature not one, but two or three Pokemons of the same type. They are Basic Pokemon cards, but usually have an insanely high HP. Tag Teams are so strong, that if an opponent knocks them out, they get to take three Prize cards instead of one.

They also have the previously mentioned GX-attack. It’s so strong, you get to use one per game.

The Story Variant is a special alternate artwork, that tells us more about the story about each group of Pokemon. You can see one such example with the Magikarp and Wailord below.

Finally, let us wrap with a set that features perhaps the most amazing looking Trainer cards. Rebel Clash released on May 1st, 2020. It’ll probably cost you less than Unbroken Bonds, while still containing some cool cards.

The two Rainbow trainer cards you see in the Iconic Cards section — Boss’s Orders and Sonia — are both pretty strong and amazingly cool looking. So if you want to get lucky and get a Secret Rare trainer card, this box might be a nice option.

We’re wrapping up with some of the most common questions that you might have when you decide to buy a Pokemon Booster Box. If we didn’t answer your question, ask us in the comments below, and we’ll get back to you as fast as possible.

Is it Better to Buy Pokemon Boosters or a Booster Box?

Most Pokemon Booster Boxes contain 36 Booster Packs. Naturally, a single pack is cheaper. However, usually (not always) you’ll spend less per booster, if you get a whole box.

Another benefit of buying a Booster Box is that it should arrive sealed. In that case, there’s a lesser chance that it’s been tempered with. Single boosters can more easily be resealed with the best rares missing.

So all in all, it’s generally better to get a whole box, than buying separate booster packs.

Which Pokemon Booster Box to Invest in?

That’s the big one. Many players want to know which is the best Pokemon booster box to buy for profit or to invest in. The idea is simple. You want to buy a Pokemon booster box now, hoping its price will go up, and you’ll be able to sell it for more money than you paid for it.

Many YouTubers will claim that you should go for this or that booster box, to make guaranteed profits, but the truth isn’t as simple. Sure, some boxes have a bigger chance of gaining value in the future, but that’s not a guarantee.

So is it impossible to profit from a Pokemon booster box? Certainly not, as we have seen booster boxes raise to very high prices often enough. We just want to warn you not to invest blindly. Actually, there are some rules you should follow.

What to Pay Attention to When Investing?

Okay, I’ll be Careful. Which One to Invest in?

As we said, it’s impossible to tell. However, the most booster boxes that usually go up in price, have some or multiple of the following things:

Usually you’ll want to get them while they are new, as that’s when their price is at its lowest. The good part is that they’ll almost never be worth zero, but you might have a hard time selling them, so keep that in mind.

Which Box to Buy to get a Guaranteed Specific Card?

If you really want just one specific card, you’re better off just buying it separately.

Until next time, have fun and may your box contain that one Secret Rare that you really want!