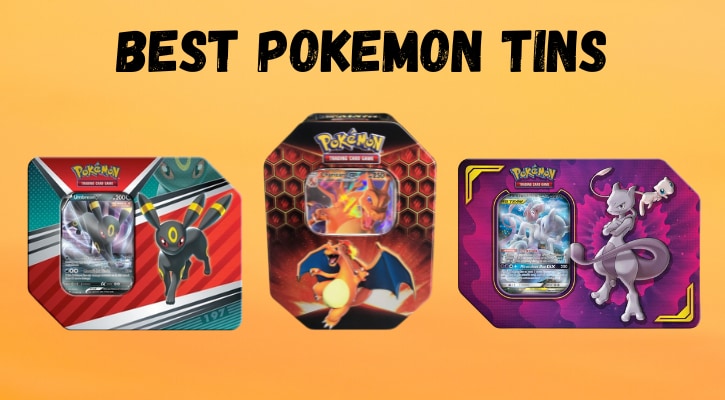 Pokemon card game has many products, and Tins are just one of them. There are multiple Pokemon Tins, so it can be hard to pick the best one. But worry not, as today we’ll talk about the best Tins, and which one would be the perfect one for you.

If you’re in a hurry, here’s a quick recap of the Best Pokemon Tins, based on different criteria.

Before we start with specific Pokemon Tins, let’s first take a look at what you can expect to get from one. Usually you’ll get:

On top of that, everything is packed in a nice looking tin box. Those are pretty durable, great for storage, and look really cool on a shelf.

When buying, make sure to check the product description. Some boxes might not come with a specific promo, but with a random one out of three possible promos.

Are Pokemon Tins Worth Buying?

This really depends on what you want. The main thing that you have to like about the Pokemon Tin is the promo card. If you don’t like a specific promo card, then the Tin containing it, is probably not worth buying.

On the other hand, if you do like the promo card, and you could use the cool looking tin box, then the Pokemon Tin is probably worth it. Besides, you could always open a Secret Rare in one of your four boosters, which would make it even better.

Let’s take a look at the actual best Pokemon Tins. Our favorite ones are listed below along with their promo cards.

When deciding which Pokemon Tin to get, it’s always a good idea to consider the newest one. These are the Hidden Potential Tins, which were released on October 14th, 2022. Those are the last ones before 2023 comes around. Here’s an interesting thing, though – this time around, there were three Pokemon Tins released at the same time.

This means that you can get a box with Giratina V, Rotom V or Gallade V. Of course, if you can’t decide, you can just get all of them. These are the Pokemon of the newer generation, so if you’re looking for some iconic Pokemon on your promo card, you better pick another Pokemon tin.

Pikachu is the most popular Pokemon, and this special V-version, is quite powerful. So if you’re looking for a Tin that will have a 100% chance of getting you the powerful electric mouse, this is the right one for you.

Of course, there’s not one single Pokemon tin that would actually be the best for everyone. However, this one is our favorite. The reason for that? It contains a very powerful Tag Team card – Mewtwo and Mew GX.

If you didn’t pay attention to the game for a while, tag team cards represent a pair or a group of Pokemons. These cards count as basic Pokemons, but are so powerful, that if an opponent manages to knock them out, they’ll get 3 Prize cards instead of one.

Anyway, both Mewtwo and Mew are pretty popular, and this Pokemon Tin gets you both of them – on a single card!

This is yet another great Pokemon Tin, that contains a Tag Team promo card. While the card might be considered a bit weaker than Mewtwo and Mew, it’s still a pretty solid one. On the plus side, the price of this Tin is usually lower.

Once again, the Pikachu is featured on the promo card, which is always a welcome sight. Alongside it, there’s Zekrom, and together they combine into one very cool card.

We talked about the Pikachu being the most popular Pokemon. If there’s a single one that can rival its popularity, it’s certainly Charizard – and you can get it in this Tin!

First edition Charizard is the priciest Pokemon card. While other Charizards aren’t anywhere near that price tag, they are still very popular cards.

So if you want to add a guaranteed Charizard to your collection, this Tin is a nice way to do so.

This is another tin that you have multiple options for a promo card. These ones are great for fans of Eevee evolutions. On the image above, you saw Umbreon V, as it’s our favorite Pokemon of the bunch, but you could also get Sylveon V Tin or Espeon V Tin.

If you’re looking for a budget option, this one is usually among the cheapest Pokemon Tins out there. So if you just want to get a Pokemon Tin (perhaps for the box), and don’t care that much about the promo card, this one will do nicely.

While Tapu Bulu is not a particularly popular Pokemon, it’s still a guaranteed GX card. The box is as sturdy as the rest of them, and you’ll still get four booster packs. All of that’s quite nice once you take into account that its price is usually lower than the one of an average Pokemon Tin.

The prices are often changing, so at some point it might not be the cheapest option. However, you can always check the price on Amazon.

Let’s wrap things up with one final suggestion. Here’s another Tag Team, this time featuring Celebi and Venasuar GX.

Both Celebi and Venusaur are Grass type Pokemons, so this Pokemon Tin is probably best for fans of that type. The card can be solid for casual play, plus the art is stunning, which is always a plus.

That’s all about Pokemon Tins. Hopefully you found a great one for you. In case we didn’t mention your favorite one, let us know which one it is – in the comments below.

If you’re looking for more Pokemon articles, you might want to check the following ones:

Have fun, and may the boosters you’ll get in a Tin contain at least one Secret Rare.