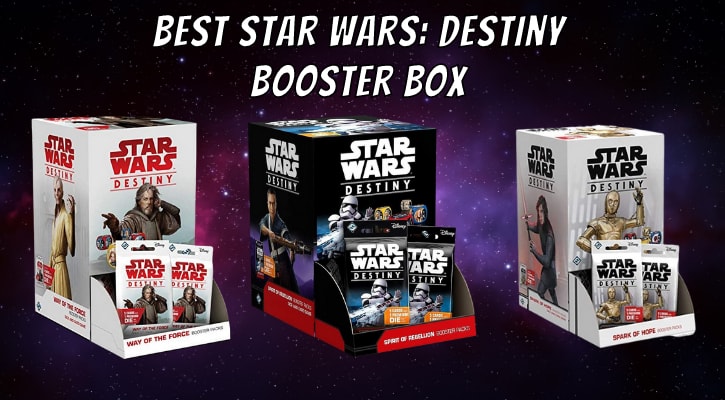 So you want to buy some boosters, but don’t know which is the best Star Wars: Destiny Booster Box to buy? This article will help you find the perfect one for you.

Star Wars: Destiny is described as a collectible card AND dice game. Unlike other CCGs, this means that the dice you use are specific to the characters you’re playing with, and you can’t just use any old dice.

Thus, booster packs are unique in that each one also includes dice. However, when you get a character that requires a certain die, it’s guaranteed to come with that die.

In addition to the die, each booster pack contains 5 cards. So in each Star Wars: Destiny Booster Pack you’ll get:

Each Star Wars: Destiny Booster Box includes 36 Booster Packs. It also doubles as a display case. So with each Booster Box you get a total of 36 dice and 180 cards.

Star Wars: Destiny sets are divided into Cycles, or groups of sets. These cycles tend to be thematically connected in the Star Wars lore, but also form groups that determine their legality.

Currently, only the most recent cycle, the Convergence cycle, is legal in Standard. Each cycle contains three expansions and you can buy booster boxes from each expansion.

Here’s a rundown of each of the cycles and their expansions.

The Awakenings Cycle was the first one released in Star Wars: Destiny. It’s no longer legal in any rotating format (Standard and Trilogy) but, like all cards released in the game, it’s legal in the non-rotating Infinite format.

The Awakenings expansion contains some of your favourite icons from the newest Star Wars trilogy, such as Captain Phasma and Kylo Ren’s Lightsaber. It also has some older characters, like Jabba the Hutt. Sith Holocron is considered one of the most powerful cards in the cycle.

The Spirit of Rebellion expansion contains references to Rogue One like Director Krennic. Some of the other great cards include Force Lightning and Chewbacca. Obi-Wan Kenobi is perhaps the greatest flavour win in the cycle, as its ability fits its theme perfectly.

Empire at War completes the Awakenings cycle and includes some excellent cards from Star Wars: Rebels such as Thrawn, Cad Bane, and Ahsoka Tano.

The Legacies cycle succeeded Awakenings. It’s legal in Standard and Infinite but not Trilogy, as Trilogy includes only the most recent cycle. It includes some of the most powerful and iconic characters from the Star Wars history, and these also tend to be the most powerful cards in the game.

Way of the Force

Way of the Force is a flavorful expansion, exploring many iconic force-wielders and their training, including Luke Skywalker (and his training) and Ezra Bridger (and his lightsaber), as well as their enemies such as Snoke and General Grievous.

Finally, Across the Galaxy ends off the Legacies cycle with some powerful combinations of characters and accompanying support cards. You can use Darth Vader with Let the Hate Flow, and Qui-Gon Jinn with Qui-Gon Jinn’s Lightsaber. Or you can mix-and-match and pilot the Millennium Falcon with Jyn Erso.

The Convergence cycle covers some fascinating periods in Star Wars history and has some of the most exciting expansions yet. It’s currently legal in all formats, and is the only cycle legal in Trilogy. This cycle (particularly the Covert Missions expansion) will have the most longevity if you purchase it, because it won’t rotate out for some time.

The Convergence expansion features unusual combinations of heroes and villains, such as Palpatine and Padmé Amidala. Other notable cards are Entourage and LAAT Gunship. Perhaps the most powerful card in the expansion is Megablaster Troopers.

The Spark of Hope expansion features some fantastic, powerful, flavor-win references from some of the rebellion’s more dire moments, including Amilyn Holdo, the Superlaser Siege Cannon, Han Solo, and of course the inseparable duo C-3PO and R2-D2.

Finally, the most recent Star Wars: Destiny expansion is Covert Missions, which covers some of the most daring Star Wars plots and their leaders, good and bad. This expansion includes characters such as Boba Fett with Slave I, Anakin Skywalker with Anakin Skywalker’s Lightsaber, and the infamous Darth Bane and his Death Field.

Opening booster boxes is great, but there are other products better suited depending on what you want to do.

Drafting in Star Wars: Destiny is not as simple as other TCGs. Each player needs a Draft Set in addition to 6 booster packs. The recommended number of players is 6, meaning the players can split a booster box for all the required packs. In total, players will each have 30 cards drafted from the booster packs, plus an additional 20 cards each from their draft sets.

There are currently two draft sets available: Rivals (from the Legacies cycle) and Allies of Necessity (from the Convergence cycle).

The starter sets are also a great product, and particularly good for getting into the game for the first time. However, in order to build a decently-sized deck (20 to 30 cards), you’ll need two starter sets.

One 2-player starter set should be enough for one deck, but buying two lets you build two big enough decks of a roughly equal power.

Just like any other CCG, there are other accessories you can buy including sleeves, playmats, and binders. While these are by no means necessary to play the game, you might want to upgrade your equipment if you enjoy the game.

Since the cards are of the same size as the Magic cards, you can use our guides for MTG accessories, like:

The addition of dice to the booster packs might be challenging to adapt to at first, but in the end it shouldn’t change too much about the game. Drafting is overall quite similar to most CCGs, and the random nature of booster packs is essentially identical. There are many products to choose from, and I hope this guide helped you find the best Star Wars: Destiny Booster Box to buy.

Remember to support your local game store when purchasing Star Wars: Destiny products. If they don’t have it in stock, most will be more than happy to order it for you!

Anyways that’s all for today. Until next time, have fun and good luck with opening SW:D Boosters.