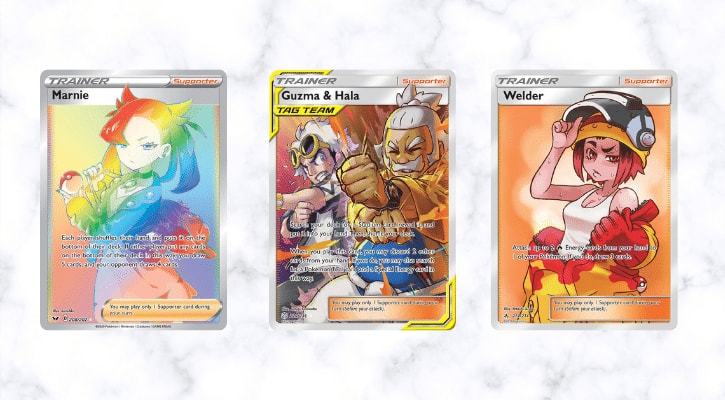 Supporters are the most powerful Trainer cards. Every turn in the Pokemon TCG, you can play one Supporter card and you almost always will want to. In today’s article we’ll take a look at the ten best Supporter cards of all time.

If you want to improve your deck, these Supporter cards can certainly help you do so. They allow you to get the most out of your turn, which can lead to many wins.

This effect is known by many names and many printings. So the number ten best supporter card includes all supporters with the “Discard your hand and draw 7 cards”. At least two copies find their way into almost every deck.

It’s not higher on the list because you don’t need to hear from me how good the text “draw 7 cards” is. To put in into perspective, your starting hand is seven cards. On your turn, you play whatever you can, play this card, and get a fresh new starting hand. And your turn isn’t even over!

This card can single-handedly save you from a slow start, or accelerate a good start into a game-winning position. There’s always the danger of discarding a card you’ll need. However, knowing when to time Professor’s Research is an essential part of mastering a deck.

Welder is a necessary inclusion as it has created a whole archetype, reminiscent of Red Deck Wins. It offers easy energy acceleration. It lets you attach up to two basic Fire energy from your hand to any of your Pokemon. If you attached at least one energy, you also get to draw three cards.

You can really surprise your opponent, when your zero energy Pokemon is suddenly able to use a three energy attack. You can also use the extra card draw to ensure you can do that again and again.

Welder is a self-contained engine, and is therefore a “build around” supporter with an archetype behind it. There’s a similar card, Blacksmith, which attaches fire energy from the discard pile. However, the extra draw on Welder fits better in most Fire decks.

Many Welder decks even play copies of PokeGear to keep their staple card consistently in hand. Any Fire energy deck should include Welder for explosive turns.

Steven is a nice, simple card. It searches your deck for another Supporter and a basic energy. This smooths out any energy problems you may have had and sets up your next turn’s Supporter. There’s nothing stopping you from searching up another copy of Steven and chaining through the copies in your deck as a safe play.

Steven acts like extra copies of whatever energy you need. and therefore can reduce the amount of energy cards you need in your deck. Steven becomes even more valuable when used in a deck with multiple kinds of basic energy.

On the other hand, Steven also lets you play single copies of Supporter cards with situational effects. (Supporters that you don’t want to see every game, but might be useful in certain situations.)

Since you can’t play the Supporter searched until the next turn, Steven doesn’t fit in the fastest of decks, but the typical deck will benefit from the consistency.

Pokemon decks go through a lot of cards; most games will end with more than half the deck discarded or played. Since most decks involve putting together all the right pieces in order to get rolling, it’s important to have cards that get what you need when you need it.

There’s plenty of deck searching effects to pull cards of certain kinds. But what if you’re looking for something specific that you don’t have a searcher for? And what if your hand isn’t the only place you want cards to go?

Misty’s Wrath takes the top seven cards of your deck, lets you put two into your hand and discards the rest. It’s an older card that’s strictly better than the more recent Hapu, which only looks at the top six.

While decks that play Misty’s Wrath are looking for specific cards to draw, many of them also feature cards that benefit from having cards in the discard pile. Sometimes it’s powering up a Mad Party attacker, other time it’s setting up a Pokemon to cheat onto the bench. Whatever the case, this card is one of the best Supporter cards for decks that utilize the discard pile.

Effects that consistently remove energy from an opponent’s Pokemon tend to be restricted to Supporters or Pokemon Attacks. Team Flare Grunt is an excellent card of this kind. By discarding an energy from the opponent’s Active Pokemon, you can set your opponent back an entire turn.

Its value goes up against decks playing special energy or attacks with higher energy requirements, as it cause an unexpected energy shortage. Similar Supporter cards can attack energy in other ways – returning it to the hand or on top of deck. However the simple discarding of Team Flare Grunt is useful against almost any deck. This makes it one of the best Supporter Trainer cards out there.

Since decks tend to be built with as little energy as possible, this Supporter can buy you time to assure victory (and maybe a groan or two).

Marnie is similar to iconic cards like N and Judge, with all of replacing both player’s hands with new cards. But while N makes players draw hands equal to the number of prize cards and Judge gives players four card, Marnie puts you up a card. You get a hand of five cards, while your your opponent gets only four.

Marnie also puts the cards on the bottom of the player’s decks. This ensures whatever cards Marnie got rid of won’t be drawn again. From your fresh new grip of five cards you’ll be able to sculpt a better hand, and your opponent will be left with four random cards.

Maybe your opponent spent the last turn searching up cards for the next turn, and now they’ve got a full grip and a smug grin. This card can make that disappear. Marnie acts as a safety, both protecting your deck from itself and slowing down an out-of-control opponent.

While you’ll end up with the same number of cards you had before playing it, the ability to search for all of these makes it worth it for setting up your next plays.

Guzma & Hala rewards experimenting with deckbuilding, making players find intricate combos to search up. Of course, you’re not locked into picking the same three cards every time. This card can act like a Swiss Army Knife. It lets you consistently grab tech cards without having to overload the deck with too many copies.

Even if you only need a Stadium, (perhaps because your opponent played another after your first Guzma & Hala), the double discard is optional. It’s rare to see a deck without any special energy, which makes this card even better. Furthermore, if you’ve got a Stadium deck, it might be worth looking into some Pokemon Tools that fit.

I’m a big fan of build-arounds, and these cards offered such a big potential payoff that one of them was hit with a day-one expanded ban.

Sure, these can only be played if they’re the last card in your hand, but you should be able to discard some cards, especially Water or Ground Pokemon. If you manage to get down to only one card in hand, you’ll get rewarded. You’ll get to draw a fresh new hand of five cards – and that’s not all. You’ll also get to put one of your Water or Ground Pokemon onto your bench.

The key here is any Pokemon of that type. This means you could end your first turn with a Stage 2 Pokemon out. You don’t even need to put its previous evolutions in the deck! Most notably, you can get a Kabutops out on turn one with Maxie. Kabutops has an ability that prevents opponents from playing any Supporter cards – which can sometimes essentially just win you the game.

Two cards in the upcoming set, Battle Styles, are similar to these, but working with Single Strike and Rapid Strike Pokemon. (Those are new types in the set.) Any effect that puts out a fully evolved Pokemon without needing its evolutions is powerful. This means building around these types of cards is well worth it.

One aspect that sets the Pokemon TCG apart from others is tutors. They arecards that search your deck to pull out specific cards. Pokemon Collector stands as one of the best, letting your search for three basic Pokemon to put in your hand.

All decks run basic Pokemon, and many of the strongest and most consistent cards in the game are basics (like Pokemon V  and Pokemon DX). Pokemon Collector also puts the cards into your hand instead of the bench. This lets you use the “play from hand” abilities of cards.

This Supporter is useful in every stage of the game, from establishing a perfect set up to digging out support cards or silver bullets against another deck. It may not be the flashiest card, but it’s the best of its kind. This makes it one of the best Supporter cards out there.

Finally, here’s the best Supporter Trainer card! Guzma takes the place of similar cards (like Boss’s Orders) that let you switch your opponent’s active Pokemon with one of their benched.

It’s an extremely powerful effect, and part of the reason Arceus-Dialga-Palkia is as powerful as it is. Switch your opponent’s active Pokemon to an already damaged or support and get the knockout.

There’s very little you can do to play against this effect, besides not running supporting two-prizers. Guzma doesn’t just only switch the opponent’s active, but it offers a free switch to you. Guzma can heal status conditions and allow you to switch into a big attacker you’ve been powering up.

Even if you already have your main attacker out, you can always switch into a Pokemon with a low retreat cost and immediately switch back in. This extra bit of versatility makes Guzma the best of the switchers, and an essential card to turn a game back in your favor.

That’s all about best Supporter Trainer cards from Pokemon TCG. Which one is your favorite? Let us know in the comments below.

If you’re looking for more Pokemon articles, maybe some of the following ones will be of an interest to you: