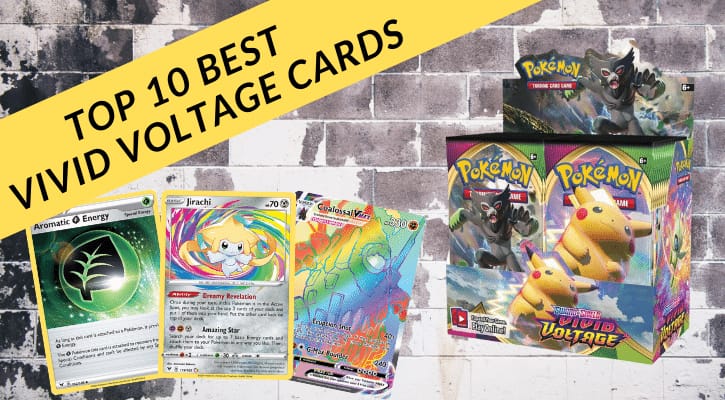 Are you looking for best the Vivid Voltage cards? If so you’ve come to the right place. After some solid play, I have come up with the top 10 best cards from Vivid Voltage. We have chosen these 10 cards based off viability in the Standard format. However, you can have lots of success with them in your casual decks as well.

Let’s get straight into it!

Orbeetle VMAX is a great addition to the standard format. It’s ability Eerie Beam, makes this Pokémon very versatile. Because Eerie beam is an ability and not an attack, you can attempt to knock out other Pokémon that have abilities that prevent attacks from VMAX Pokémon.

To succeed with this Pokémon, you must have lots of switching options to allow you to use as many Eerie Beams you can in one turn.

Aromatic Energy can contribute lots of defense to any grass deck. When attached to a Pokémon, it provides one grass energy as well as prevents any special conditions afflicted by your opponent. This can decrease your chances of getting OHKO’d by a Eternatus VMAX/Galarian Slowbro V deck.

Stone energy is a great addition to all Fighting decks. By taking 20 less damage from attacks, this card can force your opponent to use more attacks then planned to pull off the knock out. Attaching this to Pokémon with really high HP, will turn them into absolute tanks.

Galarian Darmanitan VMAX is a force to be reckoned with. Paired with the Frosmoth energy engine, set up can be as quick as your second turn. Not only will you be dealing big damage to your opponents active, but their benched Pokémon as well.

Attaching Telescopic Sight allows you to KO every Dedenne GX and Crobat V on your opponents bench as quick as 3 turns. Quick set up & heavy hits are the 2 attributes this Pokémon will bring to your deck.

With bench sniping Pokémon being so relevant in this format, Telescopic Sight is a must in sniping decks. The purpose of attaching this isn’t always to KO benched Pokémon. But it can also be good added damage to soften up your opponents bench and will allow you to OHKO them when they become active.

With Zacian being at the top of the meta with ADP (Arceus & Dialga & Palkia-GX), Coating Energy offers more support in the metal arsenal. Because Welder Fire decks are very popular, attaching Coating Energy to your metal Pokémon eliminates your weaknesses to such decks.

Talonflame V offers support and deals damage when needed. This is a very versatile Pokémon that can give you a fresh hand or deal a decent amount of damage to your opponent. Almost all Welder decks can benefit from adding this card if they have the space for it.

With Snorlax’s Gormandize ability, you will be given access to draw support whenever he is active. This is great for early game as well as late game. You are often left with little to no options at the end of your turn. Gormandize will keep your hand full giving you options through out the game.

Before we move to the number one card on this list of best Vivid Voltage cards, it’s time for a honorable mention.

Whimsicott can be a threat to bigger Pokémon. Not only does it have potential to OHKO or 2HKO big Pokémon, but it only gives your opponent 1 prize card when KO’d. U-turn Board will allow you to quickly re attach to your Pokémon keeping Flying Fury equipped at all times.

With it’s Dreamy Revolution ability, Jirachi offers very useful draw support to almost any deck. Taking 1 of the 2 cards from the top of your deck can give you that card you need in that specific turn.

Having only 1 retreat cost allows you to easily switch out to your attacking Pokémon. Almost every deck can benefit from adding this card to their deck if they have the room for it. Jirachi is certainly the best card from Vivid Voltage.

That concludes the Top 10 Best Vivid Voltage Cards list. These cards add more variety to the current meta as well as accelerate some mechanics further into the format.

If you want to try your luck by opening some packs, you can order Vivid Voltage booster box from Amazon.

Which card from Vivid Voltage are your favorite ones? Let us know in the comments below!

Finally, if you want to read more Pokemon articles, you might enjoy some of the following ones: