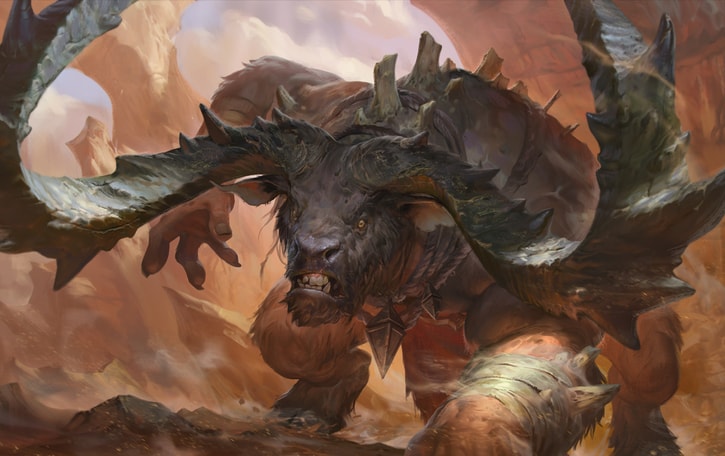 We already have Thud, which sacrifices a creature at sorcery speed to deal damage equal to its power to any target. We also have Fling, which does the same at instant speed at the cost of one more mana.

Now we have Kazuul’s Fury, which again costs another mana, with the added bonus of doubling as a red mana source. These three are all great tools to use in your Voltron or Korvold, Fae-Cursed King deck to deal huge direct damage.

Greenwarden is amazing in the right kind of deck. You get a fine body for six mana, but the most of its power is packed in the text box. You get both Crucible of Worlds and Panharmonicon for lands. That’s incredibly powerful.

All land-matters commanders will want to include it in the deck. From old staples like Lord Windgrace to new Omnath, Locus of Creation, Greenwarden will be a must.

Magic already has a number of cards like Clone, Clever Impersonator, or Phantasmal Image that double creatures on the battlefield.

You can copy your Landfall creature, to double its effects or just have two 6/6 Cragplate Baloths instead of one. Glasspool Mimic only lets you copy creatures you control, but it also doubles as a land.

Being able to double your bombs is never something to scoff at and Glasspool Mimic will definitely see some play in many decks.

#8 Nahiri, Heir of the Ancients

Nahiri also slots easily in your Voltron decks. It allows you to equip your Colossus Hammer on turn 3 or 4, and if you have something to give your creatures haste, you can swing in with it right away!

Besides, it also lets you search for more equipment to cast and is a strong piece of removal. All in all, a great planeswalker for equipment Commander decks.

This is a monster of a card, working best in a two-colour or mono-red deck. It allows you to save up mana throughout multiple turns, potentially abusing spells like Irencrag Feat.

Once you have enough mana, your opponents won’t even want to kill it, as you’ll just Fireball them for a ton of damage. Still, you can sacrifice it with cards like Kazuul’s Fury to just destroy an opponent if you wish.

Besides being yet another great minotaur for the growing tribe, Moraug is great in anything from an Omnath, Locus of Rage landfall deck to a Najeela, the Blade-Blossom extra combats deck.

On its own, it’s a great tool, allowing you to get an extra combat every turn so long as you have lands. If you have some form of ramp like Animist’s Awakening, you can get enough extra combats to win the game then and there. This is a great tool that I absolutely expect to see lots of play.

Green is coming back again strong as usual. Playing a 6/6 with haste and hexproof is never something to scoff at, and in Commander it’ll never be too difficult to pay the kicker cost so it’s a 10/10 instead.

This is just a strong card you’ll be happy to put in most of your green decks.

While green never has problems making huge creatures, Scute Swarm is a great tool to give you a wide board too. If left unchecked, it can overwhelm your opponents with ease.

You can combine it with spells like Scapeshift to make your board explode immediately, or you can simply let it build up over several turns. This is going to be a tough one to deal with in a lot of games.

Red has historically struggled with card draw, but this is a fantastic new tool. It allows you to put away your hand full of Mountains and draw some more useful cards at instant speed. It also doubles as a land if you draw it and actually do need one.

It’s a very efficient piece of card draw and will find a place in many of your red decks that lack blue.

Darksteel Ingot is a well-loved mana rock, giving you reliable mana fixing while being immune to most artifact removal. For the same mana cost, Skyclave Relic is the same but better: it gives you the ability to kick it for 3 mana, giving you two extra Relics.

Because kicking is optional, you have every reason to ditch Darksteel Ingot for Skyclave Relic.

Lithoform Engine is absolutely going to be broken in Commander. You can copy any ability or spell you want so long as you control it.

You can even use it multiple times by using instant-speed effects like:

You’ll never feel bad about including this in many decks. I’m certainly going to slot one into my Kalamax, the Stormsire copy spells deck.

Every new set brings good new Commander cards, but Zendikar Rising seems to be implementing some cards that are staples in certain decks like Voltron and copy. There are many other great cards in the set that will find a home in your more niche decks.

You can open those cards in Zendikar Rising Boosters. There are several different boosters with this set, but if you won’t be drafting and just want to open them, you should probably take a look at:

If you’re looking for more Commander articles, you might want to check the partner to this article – Top 10 Best Zendikar Rising Commanders. Besides you might like some of the following articles:

Anyways, that’s all about best Zendikar Rising cards for Commander. Until next time, may you draw as many lands as you need, and never more.