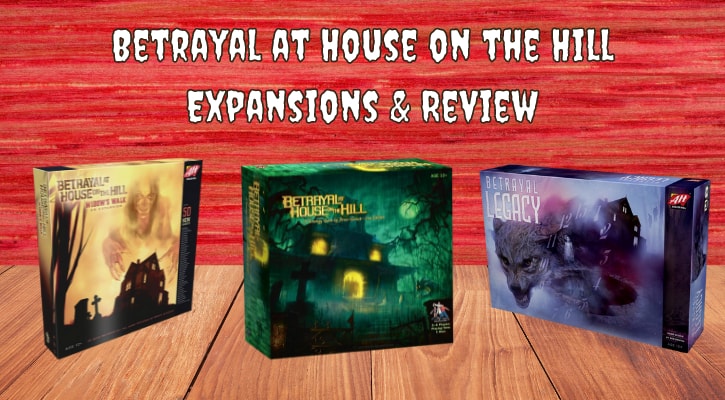 In this article, I’ll talk about everything you need to know about Betrayal at House on the Hill, including:

Here’s a quick recap if you’re in a hurry:

Anyway, if you have time, we have a lot to talk about, so let’s get to it!

What is Betrayal at House on the Hill?

The players are outsiders who end up at the mansion one way or another. While they explore the House on the Hill, they encounter Events, Items, and Omens. Each Omen builds up to a major event — the Haunt — in which one player turns on the others. The remaining players must survive this betrayal, as each group now must work quickly to meet their own victory conditions.

Betrayal at House on the Hill is a unique game with both cooperative and competitive elements. It has a ton of replayability. The mansion is randomly generated each game, as is the betrayal event and the win conditions. Playing with different people also changes gameplay, as everyone takes different approaches to decision-making.

Betrayal at House on the Hill Rules & Gameplay

Betrayal at House on the Hill is relatively simple to play. Players draw Event and Omen cards throughout the game, and each explains what it does. Each Haunt also comes with its own set of rules. There are only a few basic rules you need to understand to set up and begin play.

To begin setting up the game, you must choose your explorers. Each hexagonal explorer card has two sides, representing two different explorers each, with different personalities and statistics. Once each player has selected a character, place the Foyer and Upper Landing cards anywhere on the table. You can set the Basement Landing aside until you find a way to get to the basement. Shuffle the rest of the room tiles and place them in a face-down stack.

On each character’s turn, that character can move a number of spaces, or rooms, equal to its Speed. When you enter an undiscovered room, turn over a tile of that corresponding floor and place it in that space. If a character encounters an Event or Omen, they resolve that card and their turn ends.

Characters’ initial goals are to explore the House until the Haunt occurs, at which point their new goals and success conditions are revealed. Similar to the classic board game Clue, players determine Haunts randomly, depending on which Omen they encounter in which room. Additionally, each Betrayal scenario plays out differently depending on the layout of the mansion, the explorers involved, and the players themselves.

Betrayal at House on the Hill Review

Betrayal at House on the Hill has some of the best gameplay of a board game I’ve played. It has a strong mix of exploration, social interaction, cooperation, and competitiveness. Each of the most significant features of the game are described below, but there is no end to the experiences different players draw from the game.

There are a wide range of scenarios, and each is unique and well-written. They each make sense based on the events of the game leading up to them, and their creativity is engaging, whether you’re fighting Frankenstein’s monster or a killer plant.

However, the quality of writing is not the only result of these scenarios: they each demand different things of different players, forcing cooperation or betrayal. While the game’s innate story is excellent, the memories you form from the game come mainly from your experience with other players.

Because the game revolves around players’ choices, the game offers a great amount of freedom for players and their decision-making, reminiscent of similar-feeling TTRPGs like Dungeons & Dragons. The game’s design allows you to do whatever you want, as opposed to completing steps 1 through 3 on each turn. The game also allows for multiple approaches to solving problems, while involving chance and dice just often enough to keep you on your toes.

While the narrative and creativity are a strong boon in the game’s favor, some hold concerns about how refined the rules are. Certain combinations of omens, events, or cards are powerful enough that they outclass other characters. However, this can also lead to more thrilling games, as characters struggle to keep up with their counterparts or bargain or steal from one another.

One of the strong pros of Betrayal at House on the Hill is the near-infinite replayability. Because you randomize the tiles each time you play, the layout of the House is always different. All the Omens, Events, and Items you draw are also randomized. When the Haunt finally occurs, it’s selected randomly based on your room tile and Omen, for a possible 50 Haunts. Even when you draw the same Haunt, gameplay varies depending on House layout and the players involved.

While there are only six miniatures, for a maximum of six players, the developers focused on including as much possible replayability by making each character card double-sided, giving you twice as many options.

The game pieces are all made of simple cardboard. They are sturdy enough, but their construction does leave something to be desired. In the original version of the game, the pegs used to mark your statistics as well as the Haunt meter sit loose on the cardboard sheets. The haunt meter, and the other pieces, are susceptible to creases and wear like any cardboard. The minis themselves don’t have lots of detail, and the paint quality is lacking.

While the game pieces could have been better, it’s a small sacrifice to pay for the ingenuity and creativity involved in the game. It’s a game you’ll struggle to lose interest in, and is worth the investment.

There are a variety of different editions of Betrayal. Each have their pros and cons. Their details, as well as where you can find them, are listed below.

Betrayal at House on the Hill Editions

Betrayal at House on the Hill was originally printed in 2004. It’s no longer in print, but the updated second edition succeeded it.

The second edition was released in 2010. It features updated rules and game pieces, improving on some drawbacks of the first edition. Players can supplement it with rules errata found online, helping to adjust some of the imbalance players may experience.

The publishers released two additional editions in 2017. While not expansions to the game, they allow you to experience the structure of Betrayal in different forms or universes. Betrayal at Baldur’s Gate was the first such edition, allowing you to experience the same type of gameplay promised by the original Betrayal, now in the D&D setting Forgotten Realms. The result was a fantastic blend of a great board game and what was surely one of its main inspirations.

Baldur’s Gate was closely followed by Betrayal Legacy, a more story and narrative-focused game involving a prologue and a series of chapters.

Finally, more recently in 2020, the publisher produced a Scooby-Doo version of Betrayal, called Betrayal at Mystery Mansion. While it’s somewhat of a stripped-down version of the original Betrayal, it offers faster-paced games set in many adults’ favorite childhood show. If any cartoon fits the Betrayal skeleton, Scooby-Doo is it.

Best Betrayal at House on the Hill Expansions

So far, there’s only one actual expansion. Once when (if), there will be more, I’ll add them to the list.

Widow’s Walk – The Only Expansion

In 2016, Widow’s Walk was released as the first (and so far, only) expansion of the game. Widow’s Walk allows you to explore the roof of the House, and doubles the amount of Haunts available in the base game.

Betrayal at House on the Hill won Best Board Game from Gamer’s Choice Award, and for good reason. The creative depth, replayability, and sheer quality of gameplay make it an easy household favorite. It’s easy to get into, fun to play with both first-time players and veterans, and is timeless. You won’t regret picking it up.

As always, if you’re looking to purchase board games, check with your local game store first. Even if they don’t have a game in stock, they may be able to order it in for you.

If you’re looking for more board game articles, maybe you’ll like some of the following ones: