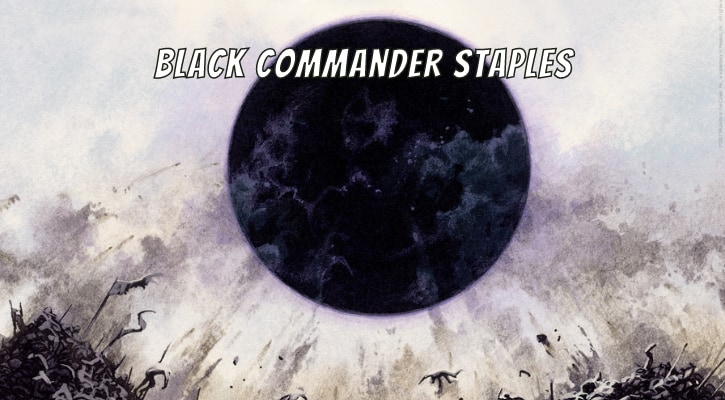 Here’s a quick overview of the best Black Commander staples. The list is by no means a definitive one, but it includes most of the best Black cards in my opinion. Each one of these cards has generic utility. This means they show up in a lot of Black decks.

Black is unlike other colors in Commander. Often times, Black wants to sacrifice creatures, discard cards, or pay life more than any other color. As a result, Black staple creatures can be very different from other colors’ staples.

One of Black’s most powerful abilities is to be able to make other players sacrifice their creatures. There are a lot of creatures like Fleshbag Murauder that do just this.

Black also has the ability to maximize the benefit from players sacrificing their creatures. Blood Artist and other similar creatures are some of the most common kinds of Black creatures in the game.

Still contributing to the aristocrats strategy are creatures that let you sacrifice your own creatures. Perhaps the best example of this is Viscera Seer.

On a different note, Black is also very good at making a lot of Black mana. Magus of the Coffers, Nirkana Revanant, and Crypt Ghast are examples of creatures that do that quite effectively.

Lastly, Black drains its opponents life away to win the game pretty often. Gray Merchant of Asphodel, and Kokusho, the Evening Star are probably the most common creatures with this effect.

Doom Blade and Murder are just two examples of cards that can kill creatures. Black is full of this effect, however, and the list of cards that could be considered staples is long.

Most of Black’s reanimation spells are either sorceries or enchantments. There are a couple of instants, though. One example is Thrilling Encore.

Tutors are also effects that typically show up as sorceries, but there are a handful of Black instants that can search your library for cards. Vampiric Tutor is one such card.

Lastly, Black instants can also draw cards. Village Rites is a great example of such a card. It sacrifices creatures (the other thing that Black is so good at) and draws cards as a reward.

Black sorceries are basically identical in function to Black instants. The only thing that sorceries get that instants mostly miss out on is board wipes. Black is full of powerful spells that destroy all creatures. Perhaps the most common cards with this effect are Damnation and Toxic Deluge.

Just like the card types we have been talking about this whole time, Black enchantments draw cards, reanimate creatures, make Black mana, and spend life.

Black is not known for having powerful artifacts, but there is one that many Black Commander decks have chosen to include. That artifact is Bolas’s Citadel. As you can see, it fits the same mold as many of the other Black Commander staples we have discussed. It spends life to gain card advantage. Not to mention it is often a combo piece that can win the game outright.

The lands that Black has access to are among the most compelling lands in the game. They reward the player for playing Black by adding a lot of Black mana. For example, Cabal Coffers, Cabal Stronghold, and Crypt of Agadeem can add absurd amounts of mana to your mana pool if you are playing exclusively or predominantly Black decks.

One of the most popular utility Black lands is Bojuka Bog. Having the ability to blow up someone’s graveyard without occupying a spell slot makes this card extremely valuable.

And if you want to read up on how to use fewer staples in your decks, check out my other articles about problems with Commander Staples.

Furthermore, if you’re looking for a new Commander deck, but don’t want to go through the hassle of making it, you should check this list of all Commander precons. Finally, for a full list of the most commonly played Black cards in Commander, check out Edhrec’s Top Black Cards page.