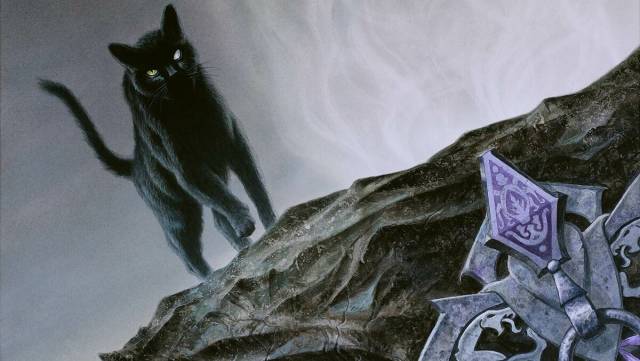 Today we’ll talk about the deck that can apparently hold its own against Oko, Thief of Crowns decks. It’s Black-Red Sacrifice or Rakdos Snackrifice – based on the food synergies.

You can import the decklist to Arena by clicking the icon in the top right corner. Then go to the Decks section in Arena and click Import. Easy.

Since these two cats were spoiled, plenty of players wanted to put the cat in the oven, get a food and bring the cat back. As it turns out, the “combo” is real.

So the idea is to have both in play. You can than sacrifice the cat to the oven. You get a food which you can sacrifice to get the Cauldron Familiar back. So you basically tapped the Oven to drain your opponent for one life.

You can get even more value by blocking with the Cat and before damage sacrifice her. That means you won’t be taking any damage from the creature it blocked. The whole interaction is even more insane if you have the following card in play.

You should remember that Mayhem Devil triggers not only when you sacrifice stuff but when your opponent does. This happens very often with cards like Golden Goose, Wicked Wolf and Fabled Passage. Oh, and with Priest of Forgotten Gods you also get a whole lot of triggers – usually three.

Pay attention if you’re playing in paper. Thankfully MTG Arena won’t allow you to miss the triggers, so that’ll make your life easier.

Steal their best cheap creature, attack them with it and then sacrifice it to the Priest of Forgotten Gods or Witch’s Oven. Many decks have a hard time coming back from something like that.

Don’t forget to board these out if your opponent doesn’t play creatures with converted mana cost less than 3 though.

Anyways the deck is preforming pretty good, but be warned – the matchup against Oko decks isn’t easy. Your winrate will probably be around 50%, which is still a lot better than most Standard decks have against the menace of Sultai and other Food decks.

If you’re looking for something fun and challenging that definitely has a strong gameplan – Black Red Sacrifice is the right deck for you. At last we should repeat: deck is a lot easier to play it on Arena than in paper. There are just so many triggers.

Maybe you want to change a deck a bit? Check our Deckbuilding Tips. If you’re an Arena player make sure that you didn’t miss any of the Free Promo Codes.

Until next time, may you always get the cat and oven combo going.