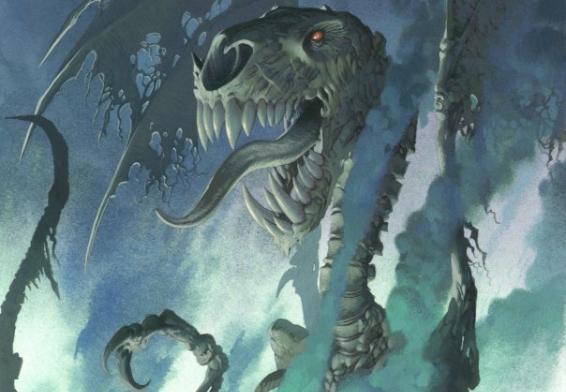 Look who came to Arena! If it isn’t Bladewing the Risen. It provides a fresh fiery breath to the Brawl format and is really fun to build around. Notice that we didn’t say good? Well, more about that a bit later, but first take a look at this Bladewing Brawl decklist.

You can export it to MTG Arena by clicking the button in top right corner.

The idea in this Bladewing Brawl deck is to play some cheap removal spells and hand disruption, then follow it up with some strong cards and some dragons. When we get to seven mana we cast Bladewing, get back another dragon and hopefully win the game.

Honestly, the deck isn’t very good. It has a hard time against the decks that either don’t have enough targets for our removal spells and deck that have repeatable card advantage, such as Niv-Mizzet Reborn.

When building Bladewing Brawl deck you always have to walk a line between playing a good stuff Rakdos deck and a synergistic Dragon deck. We decided to rely heavily on the Dragon theme, but we didn’t go all-in.

We don’t play every Dragon available, but we do play most of them. Since there aren’t that many of them currently in Standard, we can check all nine of them, that are in Bladewing’s colors.

From island of Shiv all the way back from first Magic set Alpha, comes… the SHIVAN DRAGON! This big boy is nothing special in this day and age, it’s bellow our expectations for a six drop – but there is something special about playing the original Magic dragon. If you’re not the one for nostalgia, this would be the one to cut.

Volcanic Dragon might not look like much, but haste is actually a big improvement over the Shivan Dragon. In our test games it usually preformed well in a role of planeswalker killer. It’s a completely reasonable target for Bladewing.

Hellkite is the solidest of dragons. If there were more such dragons in Standard sets, Bladewing might actually be a competitive deck in Brawl. However, it’s the best we’ve currently got – hopefully there are similarly powerful dragons in Ikoria, upcoming Magic set.

Moving from the solidest dragon to the most powerful one. One attack with Drakuseth is often enough to swing the game heavily in our favor. It’s a perfect dragon to bring back with Bladewing.

You have to wait for the correct opportunity to get some value from this dragon’s ability. Stealing humans is fine, however you’ll usually just take their mana rock like Chromatic Lantern. It’s nothing special, but it is serviceable.

Terror can’t be find in regular boosters. You can only get it in Theme boosters in paper and by crafting on Arena. It’s a fine dragon for finishing the game but it requires a bit of support. You either need to have lots of creatures in play or ability to give it haste. If you have Purphoros, Bronze-Blooded in play it can be a nice one-two punch with Bladewing, bringing at least 18 damage in the air.

We didn’t expect much from Rapacious Dragon. However, his two Treasures proved to be extra meaningful, ramping us to our late game cards. If you don’t have anything better to bring back with Bladewing, this one will at least provide two mana for Commander tax. This deck could definitely do worse than play a Rapacious Dragon.

Speaking of worse, Dragon Mage was totally unimpressive in testing. It costs to much mana, works only when it deals damage and even then we sometimes don’t want to use the ability. That’s why we decided to cut it from the deck.

Whelp, this card is just bad. We’re not playing it.

Yeah, he’s not a dragon (yet), but come on, how can you not play the biggest fan of dragons in a dragon deck. He can also turn Liliana, Dreadhorde General, Chandra, Awakened Inferno and Ugin, the Ineffable into dragons. Can someone explain why Ugin can’t just become a dragon on his own? How does any of this make any sense at all…

Players who like playing cards like Bladewing, aren’t just playing to win. Yes, winning is cool, but winning in style is what matters. That’s why we’re including some spicy cards.

This red enchantment is something special. It costs six mana and you’ll often die the turn after you cast it. Sometimes, they’ll just play Teferi, Time Raveler and bounce it to your hand, which somehow feels even worse. Maybe you’ll survive until next turn but won’t win any flips three times in a row.

But once every full moon, you will make a pile of Treasures with Rapacious Dragon, and then cast Terror of Mount Velus and get a few of those on top of it.

Or you’ll just play Bladewing and get more than one dragon from graveyard, which will then make multiple tokens… So it works like 10% of the time, but when it does work it’s 100% glorious.

We really like big goofy enchantments. This ones actually does some real work every now and then. Besides, it’s a win condition that Agent of Treachery is welcome to steal.

Red god might look like a jank card at first sight. However it’s a real deal in this deck. Just his ability which gives your creatures haste is already very good. As mentioned, it enables Bladewing + Terror of Mount Velus “combo” finish.

When we activate him to get a big dragon in play, we don’t mind that it gets sacrificed. We’ll get it back with Bladewing anyway.

Common play pattern is to play Purphoros on turn 5, next turn put two creatures in play from your hand, attack with everything. If that’s not enough Bladewing comes afterwards to finish the job.

Just a quick aside on why we’re playing so little ramp.

First version of the deck included a lot of mana rocks. However, our high end cards aren’t good enough to make up for the tempo loss of playing them. We aren’t playing stuff like Agent of Treachery and Kiora Bests the Sea God, which completely turn over the game.

That’s why we’re only playing two mana rocks now. Instead we have more interaction on the lower side of our curve.

Why is Bladewing on Arena?

Bladewing the Risen came to MTG Arena as a reward for Brawler’s Guildhall. This event starts on March, 19th and runs until April, 16th. Usually For you can play Brawl for a month for 10,000 Gold – and for your first win you’ll get Bladewing the Risen.

However, this time Wizards did a really cool thing. Since people have been staying indoors because of COVID-19, they have announced that Brawler’s Guildhall will be free this month!

Okay, looks like that’s all about Bladewing. However, as the graveyard isn’t the last stop for dragons, this paragraph is not necessarily the end of Brawl content. First, we have more Brawl decklists for you:

Secondly, we make lots of content on our Facebook and Instagram page. Yeah, by content we mean mostly Magic memes, but also some spoilers and suggestions for our future articles. So check us out if you’re a Magic fan.

Anyways, it’s a pleasure to have you reading our articles. I mean, you came all the way to here and your still reading. So until next time, may you unleash the wrath of Bladewing and hopefully win a game or two.