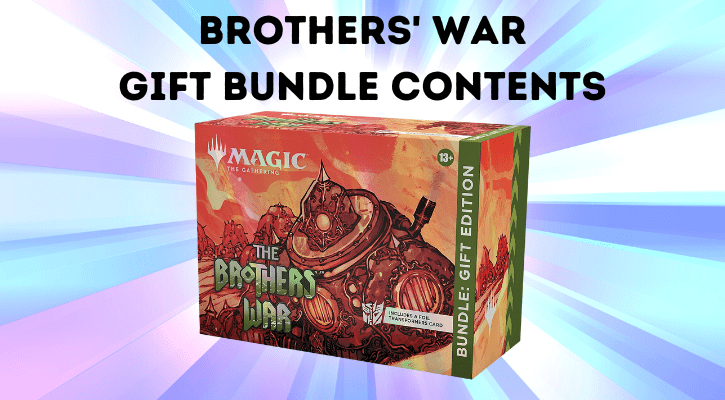 Today, we’ll explore Brothers’ War Gift Bundle contents. At the end of the article, we’ll also discuss if the Gift Edition of Brothers’ War Bundle is a good product to buy – whether you’re buying it for yourself or as a gift for a Magic the Gathering player.

If you’re unfamiliar with Magic, or if you’re just starting out, we’ll quickly talk about each of those things.

Boosters are the main parts of the bundle. All the boosters are from the Brothers’ War set (released in November 2022). There are two types of booster in this product. Set boosters and a Collector booster.

Set boosters are moderately priced boosters, which are meant to be opened. They have various exciting cards and chances of multiple rares. There are 8 boosters in the Gift Bundle.

Collector booster is the most exciting type of MTG booster. All the cards in it are either foil (premium) or have special alternate art, sometimes even both. Magic players really enjoy opening them. You can read more about Brothers’ War Collector booster contents here.

Usually you’d get a single promo card in this type of product. This time around you get a promo card from the regular set, which wasn’t revealed yet, and one of the Transformer cards. These are cards that come as Magic’s collaboration with the popular Transformers franchise.

Besides, you also get 40 basic lands. These are great for new players, but more experienced one will also enjoy them, as half of them come in the foil version.

Finally, there’s also a 20-sided spindown life counter, and the box itself. The box in which everything comes in is sturdy, has a nice artwork on it, and is a perfect storage for Magic cards.

As you can see, there are a lot of cool items included.

You might’ve noticed two versions of the Brothers’ War Bundle. One is called Gift Edition Bundle (that’s the one that we’re talking about today), and the other is called simply Bundle. It’s important to pay attention to which version are buying as, there are significant differences between the two products. Here’s a quick recap of the main differences:

There’s stuff that’s included in both Bundles, like 8 Set booster, spindown, a promo card. Since that’s the same we didn’t include it in our comparison chart.

The storage box has a special foil-like effect with the Gift Edition. While the regular version also has art on the box, it doesn’t stand out that much. Nevertheless, art preference is subjective, so we’ll call it a tie.

So, obviously the Gift Edition is better, considering only what you get in it. However, it comes with a higher price. So what’s a better deal?

Is the Gift Bundle a Better Deal than the Regular Bundle?

As of the writing of the article, the price difference isn’t that big (under $5), and you get an additional Collector booster, and a Transformer card upgraded to foil. Your average Collector booster is usually worth between 13-25 bucks. That’s why it’s a no-brainer that the Gift Edition is easily a better deal.

However, prices can change in the future. If you want to know which bundle is better, just check the price of a single Brothers’ War Collector booster. If it’s higher than the price difference between bundles, then the Gift Bundle is the better deal and vice versa.

Here are some frequently asked questions about Brothers’ War Gift Edition Bundle. Some of them are a recap of what we talked about earlier. As always, if you don’t find the answer to your question, leave a comment at the end of the article, and we’ll get back to you soon.

What’s the difference between Brothers’ War Bundle and the Gift Edition Bundle?

The regular version doesn’t have a Collector booster, the Transformer card is non-foil, and the box is different. However, it is slightly less expensive than the Gift Bundle.

Is Brothers’ War Gift Edition Bundle worth it?

If you’re only interested in Set boosters, it’s perhaps a slightly worse deal than buying a whole Set booster box. However, if you enjoy the extras you’re getting (box, promos, lands, etc.) plus the Collector booster, then the Gift Edition Bundle is surely worth it.

If Brothers’ War Gift Bundle a Good Product for a New Player?

Yes, it is provided that you already have a deck, and want to improve it. The 40 basic lands are great for a player who’s trying to build new decks, and the price of the product is quite fair. However, if you don’t already have a deck, this isn’t for you, as you won’t be able to play Magic right out of the box. For better products, see our MTG Beginner Buyer’s Guide.

That’s it for this time! Now you know what’s inside the Brothers’ War Gift Bundle, so you’ll have an easy time deciding whether to buy it or not.

If you’ll buy it as a gift, that’s great – it’s a perfect gift for any Magic player, and you don’t have to worry what cards they already own. There will surely be something they enjoy out of the box. However, if you’re looking for another option, or something else to get alongside it, check our MTG Gift Guide, with many cool ideas.

Until next time, have fun, and may you (or your giftee) open a lot of powerful cards in the Gift Bundle!