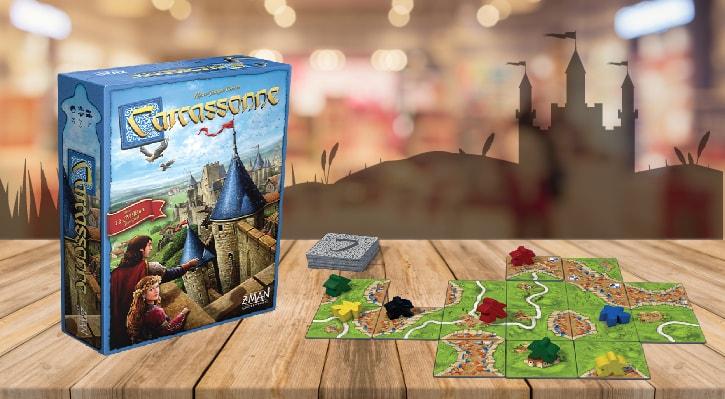 So you heard about Carcassonne, and are wondering if it’s worth buying? Or maybe you played the game, but now you want to know which Carcassonne expansion to get. Whatever the case, you’ll find everything you need to know right here.

If you’re in a hurry, here are some of the best picks from Caracassonne series, depending on what you want.

Carcassonne shouldn’t be confused with the small city located in the south of France. This strategy based board game is based around the concept of medieval fantasy tales. The game mechanics revolve around building a world of roads, grasslands, Inns, cathedrals, and fortresses – just as those the game’s name are based upon.

It’s is a mix between strategic planning and imagination. Each player gets their chance to place a tile that will impact the way in which the landscape develops. Each game brings new possibilities in strategic planning. The game offers plenty of variety, and the final map is constructed differently every time.

Carcassonne is a continually expanding franchise. It still gets a new expansion every now and then. So with that in mind, it can be hard to figure which expansion is the best to get.

There are so many expansions, that I don’t want to overwhelm you with all of them. Instead, we’ll focus on the first 4 expansions, which are the most closely related to the base game, and often considered the best to get early on. I’ll also include some of the standalone games based on the original.

But first, let’s get started with the base game.

This is a tile-laying game in which players play apart in building a varying landscape around a fortress. The goal of the game is to reach as much points as possible at the end of the game (that’s when there are no more tiles left). Each player must strategically use their followers to claim territory and get points when a structure is completed.

The mix between luck and strategy makes for an incredibly fun gameplay experience for the whole family. It is not a hard game to understand and master, so it presents the opportunity for any kind of player to win the game.

The freedom in play style allows for different strategies like building quickly and gaining fast small points or being patient and building and winning big. Both strategies have their cons and pros, which further increases the fun.

Do You Need Expansions to Play Carcassonne?

There is really no expansion needed if you have fun with the base game as all other expansions introduce an extra aspect of the game which changes the gameplay completely.

Apart from that, the only thing that could improve the base experience is expanding the player count if you desire to do so. This is possible by purchasing extra tiles, which increases the terrain and the playing time.

In general, this is one of the best and must casual board games out there, which will undoubtedly charm any player with its exciting and fun gameplay.

This was the first expansion to ever be released, and probably the best one. It introduces new landscape aspects to the game as well as the new big meeples representing giants.

In general, the base mechanics don’t change as much as further expansions, and it maintains the same charm as the original. The points system with the cathedrals and inns included adds an interesting dynamic to the game and the addition of the giant is welcomed.

It also presents the possibility to be played with one more player increasing the player count to 6, which is always good to see.

This is probably the best expansion to get if you are looking just to change the game a little bit and add a 6th player.

This expansion is another worthwhile addition to the base games. It not only provides additional land tiles which helps increase the player count, but it also increases the speed of the game with its new addition.

The builder follower increases the game by speeding up the building process. This constitutes allowing you to place two tiles a turn. The addition of goods tokens increases the ways in which to gain points.

And finally, the pig enhances the value of any territory you control as well as adding a new follower token. The addition of a cloth bag is also a nice addition for practicality.

Expansion #3: The Princess and The Dragon – Adds Story

The higher level of complexity and variation (compared to the base game) is highly noticeable in this creative expansion. It introduces story elements to the gameplay with a storybook theme appropriate for the name of the game and the overall aesthetic.

The addition of land tiles is nice due to the fact that it increases player count and replayability. However, there’s introduction of a story or the shell of it plus some unnecessary mechanical changes in the form of the Dragon and Fairy, which isn’t for everyone.

On the other hand, there’s some upside that these same characteristics can be appealing to some type of players. If you’re like adding some story and new mechanical elements, than this is a great addition for you.

This Carcassonne expansion is certainly the most unique and fun out of all the expansions. Going into online forums and discussion pages about the game I found that this expansion in particular is one of the most liked and recommended by avid players.

It undoubtedly changes the dynamic of the game by adding the Tower. While it does make the game more interesting, it’s still easy to grasp, which is great. It doesn’t just only spice up the gameplay by changing the pattern of play, but it also introduces a physical element into the game. The fact that there is an actual cardboard tower involved is kinda cool to see.

In general, this is my personal recommended expansion. It spices up the game just enough to make it worth it.

This game is a very popular franchise, and it has produced many expansions to go with the classic game. It has also introduced standalone games based on the original with changes to the theme and the addition of some new mechanics.

Let’s take a look at them.

This game re-imagining of the original game completely changes the game play. Instead of focusing on building fortresses the goal is to expand, discover, and build through the Amazonas river.

The new introductions are the amazon tiles and the double tiles. They are different, but don’t change the game completely. The meeples are still the same and the big points and strategy lies on the new camp mechanic.

In general it is a great change of scenery and theme. The overall design is smart and the gameplay is fun and smooth. It does not variate incredibly from the original, which is great for both old and new players.

This re-imagining of the game is based on the Old West and the California Gold Rush of the 1850’s. This includes all the associated aspects to that setting in the form of cowboys, mountains, and mines as well as the railroad.

The change in the setting is an interesting one, and the tie between historical periods and the mechanics of the game is a fun one.

In general, it is a great change of pace from the original. As always the design is par to none. Good addition to a collection, as well as first time purchase instead of the original.

Compared to the other re-imaginings this is my least favorite. The change in setting and game mechanics is a nice one. As always, the design of the mechanics fits with the overall theme.

But while the gameplay is fun, it’s simply not as fluid as the others.

In general, it is only worth it if you are into the theme and setting or if you are a collector. Apart from that, this game has not a lot of redeeming qualities.

My First Carcassonne – Great for Kids!

I have a special mention to this standalone game based solely on the fact that it is a game aimed at a younger audience. This is a great way of getting young kids into playing the game, but that might as well be done with the original.

That’s the end of this Carcassonne Buyer’s Guide. There are plenty of additional expansions to get, that we didn’t mention, as there are so many of them. However, now you should have enough information, to pick the best expansion for you.

Carcassonne is a very popular game. There is no doubt when saying that this game should be on every tabletop gamer’s shelf. The amount of time dedicated in making this game has made it one of the most fun and interesting games to play of all times.

I hope this article has helped you get convinced to get the base games or buy an expansion you are looking for. If you want to try another type of game, you might want to check our best card games for families.

As always, have fun and take care of each other!