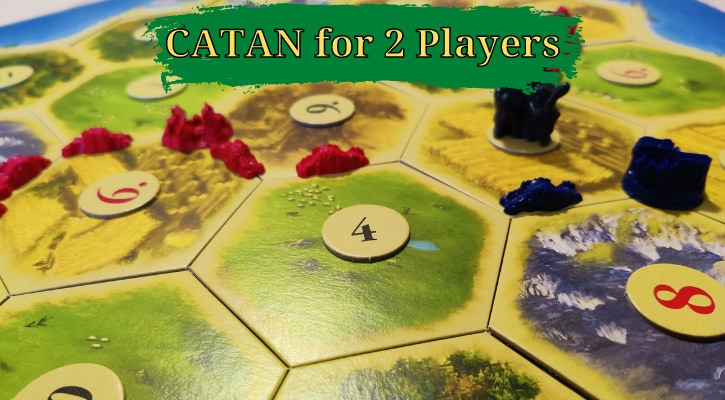 Settlers of Catan is one of the most popular board games out there, as it has a lot of going for it. Your decisions matter, it involves just a right amount of randomness, and it has a compelling goal. However, one of its biggest downsides is that it isn’t a great game if there are only two players. That’s why today we’ll talk about how to play Catan with 2 players.

One easy thing you can do is to change some rules in order to improve the experience. These are not the official rules, but the rules that various players incorporated over the years. We’ll tell you why it makes sense to use these rules.

However, you can decide which ones you’ll use for your Catan game for 2 players. The so-called house rules should be the ones that make the game the most fun for you and your Catan partner.

One of the great strategic elements of Catan is competing for the limited amount of land available. When there are only two players, there’s less competition for resources. You can combat that by removing some resource tiles.

In total, you have to remove five tiles, one for each resource. These are now considered Water tiles, which means that your island should consist of:

Of course, this means that you’ll end up with too many number tokens. You should remove one of each of the following number tokens: 3, 4, 10, 11. Then you put both 2 and 12 number tokens on one tile. You get resources from that tile whenever you roll 2 or 12.

You’ll also want to distribute everything evenly. Make sure that the red numbers are not next to each other. The game will play out better if the tiles of the same resource are not all bundled together. That doesn’t mean that you can’t have two of the same resource together, but you want to avoid three of them.

So you could end up with something like this.

The Water tiles often make some problems for expanding. You can deal with that by adding bridges to the game. These are essentially roads that you can build across the water tiles. You need either one bridge (between two water tiles) or two (directly across a single water tile) to cross the water.

A single bridge costs one Ore and one Wood. You can also change that to one Sheep and one Wood. While this does make less sense as far as the flavor goes, it does give another use for Sheep, which is considered the worst resource.

The bridges still count towards the longest road.

Another problem with Catan for 2 players is the speed of the game. With less trading partners, the game becomes slower. The following two changes take care of that.

First, you start with four resources. You pick four tiles that your towns are placed next to, and you get their resources. This way you’ll be able to start building faster, and also mitigate the luck factor in the first few turns. The later can really add up over the course of the game.

At the beginning of their turn, a player always rolls twice, and the resources from both rolls are collected. This way, the game progresses much faster, and makes it more enjoyable overall.

If a seven is rolled, then the Robber is used. Speaking of which, there are some significant changes you can make to it as well.

Once a player gets ahead in 2-player Catan, it’s pretty hard for the other player to get back in the game. When you’re playing with more players, this isn’t such a problem, as the other players often start working against the leader.

In Catan for 2 players you can mitigate this issue by changing the Robber rules. Robber now becomes Robin Hood. This means that whenever someone rolls a seven, the player with less victory points moves the Robber, and steals from the other player. (Regardless of who rolled a seven.)

This way, the leader is kept in check, so the game doesn’t get decided early on. If both players have the same amount of victory points, Robber works as usual.

That’s why it’s best to have no trading whatsoever. That might seem weird at first, but we’d suggest you’d give it a try — it really improves the Catan gameplay for two players.

So, the only way to trade is with the “bank” in a 4:1 ratio. Of course this improves the value of ports, which allow you to trade 3:1, or a specific resource in 2:1.

Cards in Hand Up to 9

With no trading between players, you’re frequently incentivized to hold multiple cards in hand. This can quickly punish you when someone rolls a 7. Consequently, punishing the player who already wasn’t able to build anything severely. That’s why the limit for cards in hand goes up to 9.

This means that whenever someone rolls a seven, each player who has more than 9 cards in hand, chooses a half of them and discards them.

Here’s a quick recap of all the rules that you can use to make your 2-player Catan game more enjoyable:

However, if you don’t like using house rules, but just want to play the game as it was meant to be played, you also have options.

An important thing to note here is that is not a regular Catan board game. It’s a card game, with some of the same flavor, but still very different from a regular board game version.

Nevertheless, it does scratch that itch for a good 2-player game with a Catan flavor. You’re still exploring and settling new lands, and using various resources in order to do so. The game has quite a lot of replayability, especially once you factor in the fact, that there are also some expansions for this version too.

Another option that you have is to use an expansion. Don’t forget that you still need the Base Catan game in order to play this, but you will get the full Catan experience.

The first expansion that you can use is Traders & Barbarians. It offers various scenarios from Fisherman of Catan, to Barbarian Attack. Each one of them is pretty exciting, but the problem is that the 2-player variant seems somewhat lacking.

That’s why we’d recommend this version to players who want to enrich their multiplayer games first, while still having an option of a nice 2-player version occasionally. But if you just want to have the best 2-player experience possible, we’d say you take a look at this next one.

Thankfully there’s another expansion, Explorers & Pirates is the expansion you’re probably looking for, as it’s certainly the best Catan expansion for 2 players.

The 2-player game play here is so good, that one could argue that the game is even better with 2 than with 3 or more players. The game mode has some special adjustments for two-player mode, but these are entirely optional, as the game play nicely even without them.

The game brings a lot of new stuff to your Catan game. You have ships, which you can move around. (That’s different from the Seafarers expansion). Naturally, there are also Pirates, which also add another layer of excitement to the game.

But the most exciting part of this one is certainly the 2-player mode. It’s balanced, it’s fun, and you don’t need to introduce any house rules at all. So if you’re looking for a cool 2 player experience, you can’t go wrong with Explorers and Pirates.

That’s all about Settlers of Catan for 2 players. If you have any questions, comments, or your own house rules that you’d like to share, feel free to leave a comment below, and we’ll get back to you.

You can also read more about the best Catan expansions. In that article, we didn’t focus so much on the 2-player versions, but you might still find something useful, especially if you like to play with 3+ players as well.

Furthermore, here are some other articles, that might be interesting to you:

Until next time, have fun and enjoy some 1v1 Catan action!