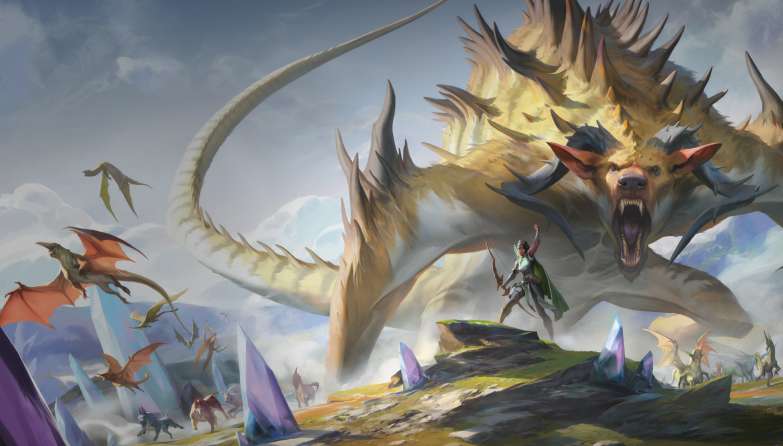 Commander decks are coming earlier than expected this year. But that’s not all, they won’t be the only Commander product we’ll get this year. So today we’ll take a look at all available information about Commander 2020 (or Ikoria Commander).

We’ve also got some exciting teasers from Gavin Verhey and we’ll also discuss these. But first, let’s check which decks we’re getting this year.

There are five decks in Commander 2020:

All of them are thematically tied to Ikoria: Liar of Behemoths. Together, they contain 71 brand new cards.

Ruthless Regiment with Jirina Kudro focuses on Humans. She’s basically an army in one card, since she brings Human Soldiers with her. With her bonus they aren’t just a 1/1 dorks, but a reasonable 3/1 creatures. Of course, they can easily get even bigger – you’ll play lots of anthem effects in your Jirina deck.

Kalamax is an unusual Commander. It’s a great choice for players who like both instants and big creatures.

Did you enjoy playing with Soulflyer? It looks like Kathril is doing pretty much the same thing, except it can be your commander! You can expect a loot of creatures with abilities in Symbiotic Swarm deck.

If you’re a fan of cycling, you’re gonna love Gavi and Timeless Wisdom deck. You can play fair with regular cycling cards and enchantments like Astral Slide and Astral Drift.

On the other hand, Gavi also enables some broken stuff with cards like Decree of Silence – counter target spell and draw a card for zero mana? Yes, please. Or you can just blow all lands for free with Decree of Annihilation. Also you’ll draw a card on top of that.

Do you really like the new Mutate mechanic? If so, then this playful Otrimi is the perfect Commander with you.

We ranked Commander 2020 decks based by different factors. This ways it’ll be easier to pick the best deck for you, depending on what you value the most.

Maybe you want to get the most value out of your Commander deck. We ranked the decks based on how much valuable cards they contain. Five of the most pricey cards are also mentioned for each deck.

All of the decks are pretty close together in value, so there is really no stinkers here. Even Symbiotic Swarm has some nice value in there.

Also, don’t forget that besides cards mentioned above each deck also includes Sol Ring and Arcane Signet, which are also worth some money.

Gavin Verhey, Senior MTG Designer has posted two videos on his Instagram, talking about exciting Commander 2020 teasers. All teasers refer to the new cards in the Commander decks. Let’s check them out.

It looks like Ikoria is full of strange creatures. Here are five unusual creature types we’ll get:

Besides all that, we’ll also get Magic’s fourth Trilobite. With first three being Electryte, Scuttling Sliver and Shore Keeper. So get excited or something?

Although no actual cards were previewed by Gavin, we got some snippets of card text. So there are new cards in Commander 2020 that include the following:

There’s also a certain card that might help white in Commander! It’s a mono white card that let’s you repeatedly ramp Plains from your library onto the battlefield. Hopefully it turns out great – white definitely needs it.

Is there an old mechanic you like? Well, maybe you’ll get it in this year’s Commander deck, since we’re getting 8 non-evergreen returning mechanics. What could these be? If you have any ideas – let us know in the comments bellow.

Out of 71 new cards in Ikoria Commander, there are 41 cards, which mention counter(s) in their rules text or in reminder text. That’s a whooping 57.7% of new cards!

Gavin also gave an fun example of a specific counter we’ll get. There’s a Hound that makes Fetch counters! Get it? Because you play fetch with a dog… Okay we’ll stop.

Experience counters are confirmed to return. There’ll be exactly one legendary card that uses them. This is in addition to the eight returning mechanics mentioned before.

One particularly interesting teaser we got is about a new cycle of cards. It’s a re-imagining of an old popular multiplayer cycle. Which cycle could this be? Maybe a cycle of Primordials (the one with Sylvan Primordial).

Do you know the story about Maro? It’s a Magic card that got named after the MTG head designer Mark Rosewater.

Gavin told us that there’s a card named after him this time! The initials of the card name will spell GAVIN. At this place we’d like to thank Gavin for all the work he puts in Magic (a lot of it goes specifically to Commander). Congratulations on getting your own card, well deserved!

That’s all about the teasers. You can find both Gavin’s videos here – Part One an Part Two.

As we previously mentioned, all decks have share themes with the main Standard set Ikoria: Liar of Behemoths. They also share same release date – April, 24th 2020.

Some stores will also have decks available at their Prerelease events. These are happening on April 17-19, 2020. If you’re interested in this event, check for stores near you in Wizard’s Store Locator. You can find their contact info there, so you can ask whether they’ll have the Commander decks available or not.

Where to Buy Commander 2020 Decks?

Besides you’re local game stores, you can also get them on Amazon. You can already preorder all five of them, for a reasonable price. This way you’ll get them as fast as possible.

That’s far from the only product Commander players will be getting in 2020. Today we’ll only touch on the upcoming products, but you can expect a special article for each one of them – once we get more information.

Zendikar Rising will bring us two Commander decks. Each of them will contain 3 brand new cards, the rest will be reprints.

These two decks will be a bit different from your regular Commander decks. They will be more beginner friendly. However, you can still expect some great reprints in them. More information about Zendikar Rising Commander decks here.

This is a brand new product. It contains eight specific cards – reprints of green Commander staples. Each of them has a new art, depicting a legendary character casting a spell. As you can see, one of those characters is Yisan, the Wanderer Bard.

This product releases in autumn 2020. Other colors will probably get their own Commander Collections in the future.

Are you a fan of both Draft and Commander? Then this is a product for you. It’s a draftable Commander set!

Here’s what we know about Commander Legends so far:

Two more Commander decks will be released alongside it, similar to the ones in Zendikar Rising – beginner friendly and containing 3 new cards each.

If you don’t want to miss any more Magic the Gathering news, give us a follow on Facebook or Instagram. We’ll keep you updated with Magic spoilers, new products and some other fun stuff.

If you’re looking for more information about upcoming Magic products, you can read about Jumpstart Booster or about Cube Sealed on Arena. Of course, there are also Ikoria Spoilers available.

Anyways, that’s all about Commander 2020. Until next time, may you play a ton of fun Commander games.