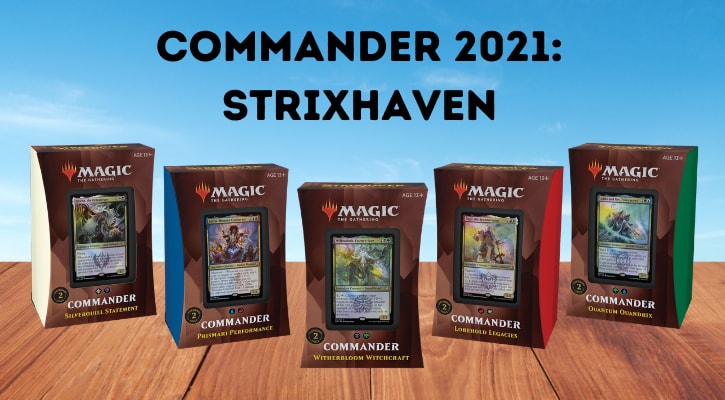 Commander 2021 or Strixhaven Commander is bringing us five new pre-constructed Commander decks! There’s one for each of the five Strixhaven colleges:

In this article we’ll take a look at all Commander 2021 decklists, and explore what each of the decks is trying to do. Let’s get to it.

Commander 2021 decks are starting off strong! Lorehold has a very interesting take on the red-white combination. This color combo is usually somewhat weak in Commander, as it’s often focused solely on attacking. However, that isn’t the case here.

This deck focuses both on artifact and graveyard interactions. Osgir the Reconstructor is an amazing commander, which encapsulates the strategy perfectly.

The first ability doesn’t provide a powerful effect, but it be used as an effective sacrifice outlet for artifacts. However, its second ability is where the real value is. You can get two artifacts for the price of one!

It can also be used as a powerful ramp engine. You can exile something like Hedron Archive to immediately get your mana investment back.

You’ll also want to add something Ancient Den and Great Furnace as both work amazingly with Osgir. You can tap it for zero mana, and exile one artifact land from your graveyard, to get two artifact land tokens into play. Now that’s some serious ramp in a color that’s mostly lacking in that category.

All in all, this deck looks really fun to play, especially if you’re looking for a fresh take on the red-white combination. If you want, you can get one on Amazon.

Prismari might look like Izzet at the first sight – casting instant and sorceries is basically their whole gist, right? However, Prismari have their own twist, as can be seen from Zaffai, Thunder Conductor. While casting cheap instants and sorceries is still fine, you really get big payoffs for casting expensive ones.

For every instant or sorcery, you get to srcy 1. If that spell’s mana value was at least five, you get a 4/4 Elemental on top of that. If its mana mana value was 10 or more, you also do 10 damage to a random opponent.

Your best friends will naturally be instant and sorceries with X in their costs. They are already very flexible, but now you can get additional value from them with the help of Zaffai.

This is a great Commander 2021 deck for anyone who enjoys casting big spells. If you want to try it, you can buy it on Amazon.

Do you like making tokens? If so, you’re gonna love Adrix and Nev, Twincasters and their Quantum Quandrix deck.

Ward is a new, slightly nerfed version of hexproof. It makes it a bit harder to deal with Twincasters, but by not means impossible.

However, all the value is centered in the second ability, which is really amazing. You get Anointed Procession or Parallel Lives in your Command Zone, so you can truly build around the token strategy.

You can really do some powerful stuff with this card, but perhaps the most insane interaction is with the Helm of the Host (not included in the deck). If you equip your commander with it and nobody interacts with it, you’ll have 2059 Twincasters in three turns, which is pretty bonkers.

If you want to play Quantum Quandrix, (which looks like the most powerful out of all Commander 2021 decks) you can order it on Amazon.

Silverquill Statement has perhaps the most unique commander out of all Commander 2021 decks. Breena, the Demagogue isn’t the most powerful commander out there, however it play into multiplayer politics like not other card does.

It rewards all players for attacking – but not attacking just anyone – nobody will get a bonus if they attack you or the weakest player at the table. It’s a really cool effect, which adds more focus on attacking. This can push the game in a fun new direction, so players won’t just durdle around waiting for someone to combo off.

The downside is that the rest of the deck lacks some clear focus, and mostly contains just good black and white cards. However, if you do like these type of cards, the deck can definitely provide some fun game play.

In the main set, Witherbloom has many life gain cards. Willowdusk is a payoff for those strategies, but also has an upside if you lost a bunch of life. It’s another commander that isn’t in-your-face powerful, but it does enable some interesting play patterns.

The deck has plenty of interesting mini combos, mostly built around gaining or losing life.

Here’s some more information about the Strixhaven Commander decks. If you have a question, that we didn’t answer feel free to leave a comment below.

These decks aren’t the budget versions with only a few cards per deck, like the ones we got with Kaldheim and Zendikar Rising. These are more powerful precons, like the ones we got from Ikoria. Each deck contains 20 or more cards that are either exclusive to the deck, or also appear in the main Strixhaven set.

You can also get each deck with minimal packaging. They don’t have the usual big packaging, these decks regularly do, but come in a more bland box. However, a paper deck box is still included.

That’s all about the Strixhaven Commander 2021 decks. Which one is your favorite? Let us know in the comments below. If you want to know more about them, you can find the best Commander 2021 cards here.

If you’ll buy a new Commander deck, you might also want some new deck boxes and sleeves. You can find the best deck boxes for Commander here and best MTG sleeves, that won’t split easily here.

Until next time, have fun, and may your new Commander 2021 deck provide a ton of fun and amazing games.