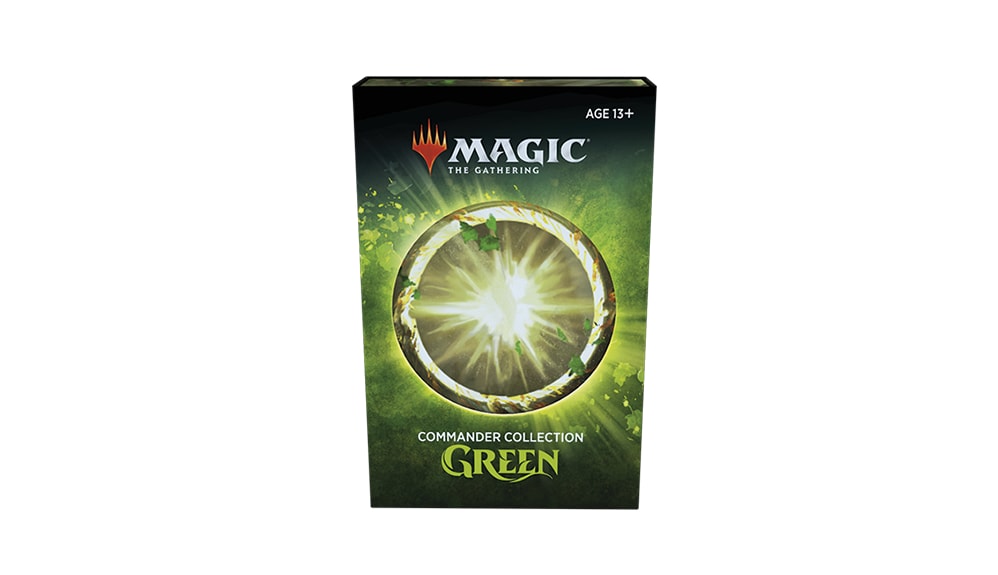 Today we’ll talk about Commander Collection: Green and answer every question you might have about it, such as:

We’ll also talk about each single card that’s available in this product. As you see, we have quite a lot to talk about, so let’s get right to it.

What is Commander Collection: Green?

Commander Collection is a new type of product. It contains eight specific cards. All of them are Commander staples, centered around a single color.

There will be one Commander Collection for each color, and the first one is green.

Each card has a brand new art, often featuring a green legendary character.

However, Freyalise remains a poplar choice for a mono green commander, and is a welcome addition to this product.

The first version of Omnath is also a very popular Commander card. It enables a really interesting take on ramp, whether as a commander or as a part of the 99.

All in all, it’s a great card to have access to if you’re playing green in Commander.

Do you hate artifacts? Hate enchantments? So does Bane of Progress. Destroy all that messy stuff with it and let only creatures and lands remain. Oh, and planeswalkers too.

While Prophet of Kruphix is too strong for its own good, Seedborn Muse is both powerful and legal in Commander. This Kamigawa themed art looks really nice and is a very welcome reprint.

Sylvan Library is probably the best reprint here. It’s an amazing card for any green Commander deck as it provides you with some serious card advantage for only two mana.

Worldly Tutor is great. Sure it does search only for a creature and it puts it on the top of your library, but hey, it costs just one mana and works at an instant speed.

As such it’s a great addition to any green Commander deck, especially the ones featuring Yisan, the Wanderer Bard.

What to say about Sol Ring that hasn’t been said before? It’s certainly the most common Commander staple, and one of the most iconic cards of all time.

It might be a bit weird, that it appears in a green Commander Collection, but let’s be honest – vast majority of the green decks will play it. It does have a bit more green in the artwork, which is set in the forest. This makes it a perfect flavor fit for your green decks.

The last card works in a similar vein. While its not green, it has a green-themed artwork and a flavor text from a popular green planeswalker Garruk Wildspeaker.

However the land really isn’t at its best in a mono green Commander deck, where you’d rather prefer a basic Forest.

Commander Collection: Green releases on December 4, 2020. It will be only available in WPN (Wizards Play Network) stores. There will be to versions available:

The foil one will, naturally, have a higher price.

That’s it about the first Commander Collection. If you want to read more about Commander, you can take a look at the following articles:

Until next time, have fun a win many games with your big green creatures.