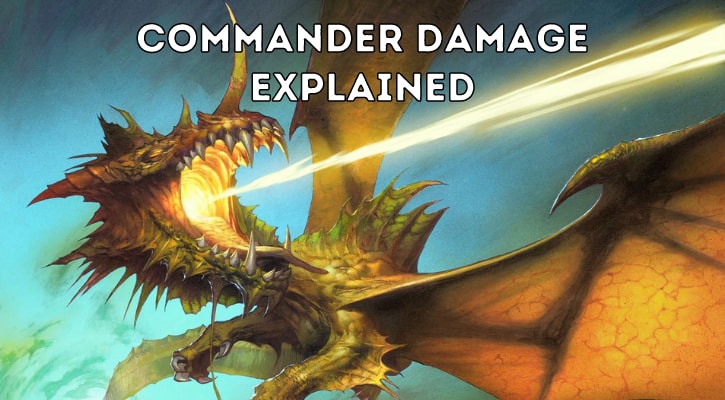 I remember the first time I played Commander in a game store outside my normal playgroup. I was playing an incredibly unoptimized Nicol Bolas, the Ravager deck. My opponent was playing Muldrotha, the Gravetide. Some time into the game, my opponent attacked me yet again with Muldrotha. Not wanting to lose my commander by blocking, I said, “I’ll just take the 6.” My opponent looked at me funny and replied, “You do realize you’re at 18 Commander damage, right?”

The Commander format in MTG has a number of unique rules that differentiate it from other formats, perhaps most notably the commander itself. However, there is another, often overlooked rule that sets EDH apart. This article will define Commander damage, explain its purpose, and suggest alternate rules for playgroups.

What is Commander Damage?

A player that’s been dealt 21 or more combat damage by the same commander over the course of the game loses the game.

It’s important to note that only damage dealt in combat, i.e. when a commander attacks another player, counts for Commander damage. You also need to remember that damage is tracked separately between commanders.

However, if you have a commander who is a creature on both sides, such as Kianne, Dean of Substance // Imbraham, Dean of Theory, attacking with either adds to the same pool of 21 Commander damage per opponent.

If you play 2-Headed Giant commander, damage to either player on a team contributes to the same pool of Commander damage. Therefore, if one team receives 21 or more Commander damage, that team loses.

Why have Commander Damage?

If you’ve ever been in a 2, 3, or 4-hour game of Commander, you’ll know why Commander damage is important. With so many life-gain and prison effects, or cards like Exquisite Archangel, EDH games can easily stretch out.

Commander damage ensures players are able to end games more swiftly. Instead of dealing 40 damage or more (sometimes much more – I have many times gotten over 1 000 life with cards like Clearwater Goblet and Verdant Sun’s Avatar), players can end games after dealing only 21.

This provides players an alternate way to win games beyond reducing opponents’ life total to 0 or pulling off combos. It also makes games more interesting by adding a layer of strategy, and even enabling entire game plans and decks.

How to Use, and Survive Against Commander Damage

Often, as was my experience in the introduction, players can easily forget Commander damage. Keeping track of it is usually the responsibility of the player attacking in casual playgroups. Using a D20 for each player you’ve attacked with your commander generally suffices.

There are two main ways people employ Commander damage. The first is often by incidental “chip” damage. This is done with creatures with low stats. Examples include the 4/4 flying Nicol Bolas, the Ravager or Atraxa, Praetors’ Voice.

They don’t often intend to win by Commander damage, and often attack because it’s convenient. While it’ll take you 5 turns to win with such a commander, it adds up in longer games. Make sure you (as attacker or defender) are wary and keep track of how much damage you’ve taken (or dealt).

The other way is when players’ primary win condition is Commander damage. Cards like The Mimeoplasm are specifically designed around it, while cards like Rograkh, Son of Rohgahh make it easy to pile equipment and auras on it (i.e. a “Voltron” strategy). This is when you should be very afraid of dying to Commander damage.

How to deal with Commander Damage?

So, how do you deal with it? Single-target removal is of course the most efficient way to get that commander off the field. Putrefy is an excellent, versatile spell, whereas cards like Swords to Plowshares get around commanders that have Indestructible.

Did your opponents disable your single-target removal with cards like Lightning Greaves and Swiftfoot Boots? You can use boardwipes – such as Crux of Fate and Day of Judgment to destroy them without targeting.

If your opponents have managed to give their commanders both Hexproof and Indestructible, use catch-all boardwipes such as Merciless Eviction or Black Sun’s Zenith.

How to Deal Commander Damage?

But what if you want to deal Commander damage? Commanders with evasive keywords such as Flying and Trample make it much easier to get damage in. Cards like Swiftfoot Boots and Lightning Greaves protect your commander and give them haste, so you can attack sooner.

My favorite way to ensure I get Gishath, Sun’s Avatar in for direct damage, is by making it unblockable. There are a number of ways to do this, including, but not limited to:

Even if you don’t plan on winning via Commander damage, it’s a good idea to include a couple of these tools as a backup strategy for those long games in which nobody wants to concede.

Commander damage applies in different ways in different playgroups. Because Commander is a casual format, often played amongst friends, there’s no reason playgroups can’t tweak the rules to their liking. There are a number of ways to modify it to better suit your local meta.

One of the more common rules is to effectively ignore Commander damage unless you plan on or expect to win with it. Players with Tetsuko Umezawa deck, for example, may be using their commander more for utility and do not intend to attack each other player with it 21 times over the course of a game.

In those cases, players can simply ignore it. Players who think they might win via Commander damage should track it openly if using this house rule, so everyone knows where they stand.

Another, simpler rule is to omit Commander damage entirely. If your meta rarely intends to win with it, or all play low-power commanders, you can all ignore it to streamline the game somewhat.

One similar proposed rule is to remove Commander damage, but have commanders all deal double the amount of damage in combat. This has the benefit of removing the extra tracking, but the downside of favoring some commanders far more than others.

All Damage is Commander Damage

Some players like to alter Commander damage such that it affects all damage dealt by commanders, not just combat damage. This allows Syr Konrad player to win after 21 activations of their commander’s triggered ability instead of dealing 21 damage by attacking. This rule may be better suited to combo-centric groups.

As always, if tweaking the official Magic rules, always seek unanimous assent from your playgroup to preclude drama and conflict. If anyone disagrees, fall back to the official rules—they’re there for a reason.

Commander damage is a unique rule that makes EDH the great format it is. It enables certain strategies, commanders, and even whole decks to be viable in the format, not to mention the added fun and threat to play around. But another great thing about Commander is how malleable and customizable the experience is, so you can alter the rules that don’t suit your playgroup.

How do you like to use (or defend against) Commander damage? What are your favorite commander-damage-commanders? Let us know in the comments below.

If you’re looking for more Commander articles, here are some that might be interesting to you: