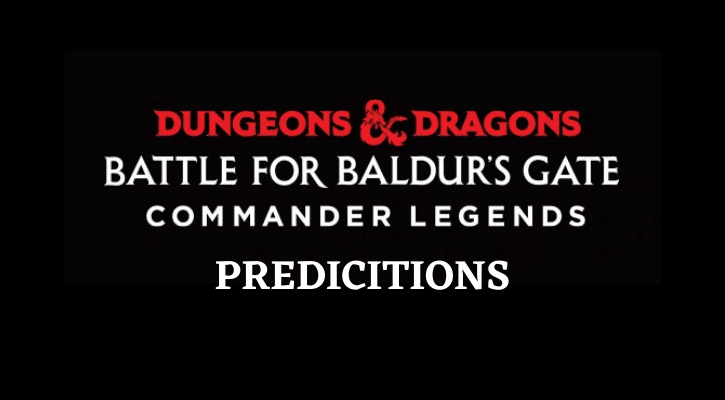 What is Commander Legends 2?

Players will craft 60-card commander decks from the cards contained in the packs they open at the event. Players must have one or more commanders, but do not need to adhere to the singleton rule. Other than these restrictions, the rules are identical to a typical commander game.

The first Commander Legends iteration did not strictly follow a comprehensible storyline. It included characters and cards from across Magic’s history and did not concern itself with story conflicts. In its sequel, however, that may all change: The Battle for Baldur’s Gate subtitle means the set will be another crossover to the Dungeons and Dragons universe.

It will be a sequel to both Commander Legends and the Adventures in the Forgotten Realms (AFR) standard set. As for what’s in the set, for now, all we can do is guess. The rest of this article will cover a variety of predictions for the coming Commander Legends set.

Obviously, Commander Legends: Battle for Baldur’s Gate will be set in the iconic Dungeons & Dragons Forgotten Realms city Baldur’s Gate. However, the design team could take this in several directions.

Will it be merely themed around D&D and the city, or is it going to follow a cohesive storyline? To what extent is the set going to align with the setting? Will the set be strictly based on D&D, or will it reference the popular RPG video game, Baldur’s Gate?

Here are a number of my predictions regarding the story and theme decisions made by the design team.

1. The city will be heavily focused around the city, not just the Forgotten Realms setting.

AFR allowed designers to include general D&D themes without care for story cohesion. This set is based in a more specific location, which allows them to narrow down the story and characters. This will be a step-up for those who thought the Forgotten Realms set was disappointingly story-light.

2. The set will also focus on a specific period of Baldur’s Gate and follow a more coherent storyline.

The only question is, which Battle of Baldur’s gate? Will the set be based around the Tax Revolt, a civil war that arose from the division of the city by a great wall? Will it surround the murder of Grand Duke Abdel Adrian and the subsequent ascension of the Slayer, reincarnation of the God of Murder, Bhaal? Or will Wizards of the Coast (WOTC) design an entirely new story to go along with the set?

My guess is they will do the latter; creating a new storyline allows them more creative freedom and allows them to avoid many conflicts. Judging by the scarce spoilers so far, it may involve an invasion by the terrible Mindflayers.

3. Following the style of AFR, Commander Legends 2 will likely have a heavy focus on the general D&D setting.

However, I think WOTC would be remiss not to include references to the highly popular RPG Baldur’s Gate. Especially following so closely after Kamigawa: Neon Dynasty, WOTC has proven they are willing to be bold and inventive. Some pixel-art, video-gamey-style art or card themes wouldn’t be out of order.

The mechanical design of the set will closely resemble the format of Commander Legends. WOTC has already announced it will feature an identical draft format as its predecessor. It appears to follow it in other ways, as well. As such, we can expect a high number of new cards from WOTC, as well as some key reprints. They will likely switch up the core set mechanics (such as Commander Legends’ Encore ability), however there are a few things that are more than likely to see a return, such as:

The limited format of Commander Legends all but demands a wide array of partners to build interesting decks. Alternatively, WOTC may include a similar mechanic, but without the “partner” keyword to avoid diluting the pool of these cards. One idea would be an “alignment” mechanic, where you can partner only with characters of a similar (e.g., good or evil) alignment.

We may see a return of Monarch, a popular mechanic for 4-player pods. However, WOTC may re-introduce a similar mechanic, or invent a new one, for the same purpose.

Support and archetypes in all 10 2-color combinations

With such a large set, and with the size of Commander Legends set, it’s unlikely WOTC would focus on only 5 color pairs like a typical standard set.

In terms of what other mechanics WOTC are like to include, I strongly expect to see the City’s Blessing mechanic. It fits thematically perfectly with the setting — a huge, magical city — and was a very popular aspect of the Ixalan block. I’d hedge my bets to see it return in Commander Legends 2.

Politics-related cards are another likely include. In both the TTRPG setting and the RPG game, Baldur’s Gate emanates political strife. Effects like Bounty counters and Goad would allow players to introduce the same level of politics in their games.

Lastly, because of their popularity, WOTC will likely want to ensure the Commander Legends sets are compatible with one another. This would allow people to draft the sets together.

Mirroring Commander Legends, expect many new cards in the sequel. It’s never easy to predict what cards WOTC will include in a future set, but based on the theme of Baldur’s Gate, we can make a few educated guesses about what is to come.

As the set is D&D-themed and requires myriad legendary creatures for the sake of deck building, we will probably see popular D&D and Baldur’s Gate characters make an appearance. Here are some theories about new cards:

We can also expect many new legendary creatures, as a Commander Legends set requires many options to lead your deck around whatever archetype/color combination you choose. These will likely be made up of characters from D&D’s history, but not include those already featured in AFR.

Some notable includes, however, might be Imoen, an unexpected fan favorite; Elminster Aumar, one of the Forgotten Realms’ most powerful wizards, and already mentioned by WOTC; and Jan Janssen, an inventor who may provide artifact synergy. Minsc, Beloved Ranger while recently seen in AFR, is wildly popular and might make a return, perhaps with Boo upgraded into the “miniature giant space hamster” Minsc believes they are.

Frankly, there’s rarely a lot of sense to what WOTC chooses to reprint. It’s not based on rarity, last print date, or any other discernible measure. However, we can easily surmise that Commander Legends 2 aims to surpass its predecessor with the release of stronger reprints from throughout MTG’s history.

Expect to see some of your favorite, powerful MTG artifacts, creatures, and spells reflected in the new set. Some returning mechanics and cards we might see include:

What NOT to Expect in Commander Legends 2: Battle for Baldur’s Gate

It’s always fun to speculate about things we hope to see in an upcoming set, but it’s helpful to temper our expectations by ruling out certain possibilities. Here is a list of things we’re unlikely to get from the set:

Reprints of cards featured in AFR

This includes new cards for characters who already got cards. There are so many notable D&D characters, it would do them a disservice to give more than one card to a character.

Additionally, most of the AFR cards were relatively low power; being printed so recently, it’s unlikely they will be reprinted.

Commander Legends 2 will be set in the Forgotten Realms, which is not strictly part of the MTG multiverse; while some characters are mechanically planeswalkers, WOTC has said this doesn’t reflect MTG canon. Thus, don’t expect to see characters like Chandra or Liliana returning so soon.

The same mechanics as Commander Legends

While the old “block” system of grouped sets — such as Ixalan and Rivals of Ixalan — often shared mechanics, Commander Legends: Battle for Baldur’s Gate seems to be an entirely separate entity from its first iteration, except in format. WOTC will likely try to continue making the set new and diverse by featuring different mechanics.

Just as it’s difficult to predict what WOTC will include, it’s nearly impossible to say with certainty what they’ll exclude. However, we can bank on past trends of MTG to give us at least an indication of what won’t be in the set, so we can look more clearly at what we can more likely expect.

Commander Legends 2 is the kind of set where you don’t realize how much you want it until it arrives. This set looks particularly interesting as it builds upon the popular Forgotten Realms IP while retaining a lot of creative freedom for the WOTC design team.

While I can’t guarantee the accuracy of any of the above predictions, I’m looking forward to seeing how closely my thoughts line up with those of the design team. I’ll be excited to play this second iteration of Commander Legends.

What cards or mechanics do you hope to see in the new set? Let me know if you have anything to add to the list, or if you disagree with any of these predictions! Furthermore, you can also find Battle for Baldur’s Gate Spoilers here, or you could browse Baldur’s Gate Commander precons.

For more Commander-based reading, check out the following articles: