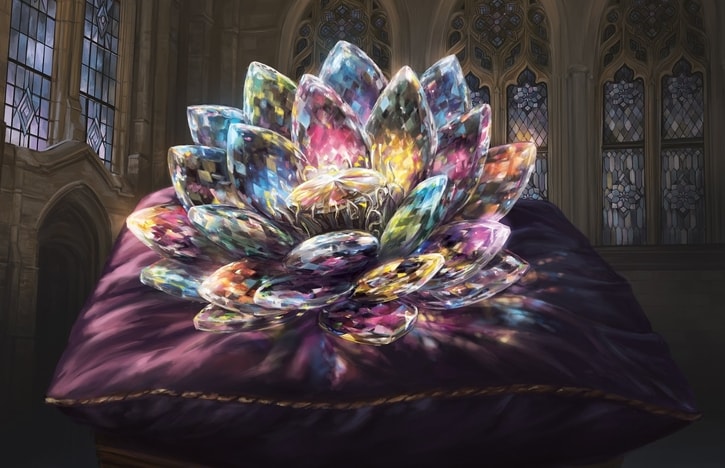 Is your playgroup being Overrun by Commander staples and auto-includes? Are all of your decks starting to look the same? Are your games playing out in a predictable way time and again? Are you falling out of love with the game that once brought you so much joy?

Well, before you give up on Commander or Magic in general you should give this article a chance. I am going to help you figure out how to break out of these ruts and breathe new life into your Commander decks.

So Many Staples, So Little Time

Over the last few years, Wizards of the Coast has transitioned to designing cards aimed toward pleasing Commander players. This transition has produced cards that both please and displease us.

The elephant in the room is Jeweled Lotus. Love it, hate it, run it, or burn it, we can all agree that the Lotus is a new Commander staple.

It is flexible enough to be playable in most decks, but not powerful enough to be banned (as per the Rules Committee’s decision).

So, it joins Arcane Signet, Fierce Guardianship, Smothering Tithe, and Dockside Extortionist on a list of Commander-focused cards printed in the last two years that you can’t really afford to not play.

Due to Jeweled Lotus and dozens of other staples of the format, a Commander deck seems to be mostly built before you even start to think about what cards you want to put in. It can feel like they are pre-made once you choose a color or commander.

Here is a link to lists I made of staples for each color:

Having so many “auto-includes” for each color takes away one of the most interesting parts of Commander: creativity.

If you have to include 37-ish lands and 40-50 staples, that only leaves room for 13-23 cards that are unique to your deck or idea. This takes away a lot of the fun for a format that used to let you play whatever cards you want.

Not only is it boring to run a staple-heavy deck, it can also get expensive. When a card becomes a staple, demand for it goes up significantly, while supply stays the same. The scarcity created here causes Commander staples to be pricey.

Often times this means that many players are completely unable to get their hands on cards that are widely considered to be irreplaceable.

As many budget players have learned, imposing certain restrictions upon yourself during deck building is a great way to flex your creative muscles. All cards can be replaced if you are willing to look for their replacements.

For example, Craterhoof Behemoth is one of the most played green cards in Commander. All of the other cards that do a similar thing to Behemoth fall short in quality compared to this creature. Hoof is obviously the best version of what it does, and therefore should be played in every green deck that wants that ability. Right?

Well, yes. But also, no. Each new iteration of Craterhoof’s ability is slightly different than the last. This sometimes means that budget players have to settle with an almost-as-good version of the effect. However, it also means that every card can be taken advantage of in a distinct way.

You see, I am here to propose that Craterhoof Behemoth is the best card to play in decks that want to win with Craterhoof Behemoth. Those decks might not all look the same, and they are largely dependent upon the intentions of the deck’s pilot.

These decks might have a lot of similarities, but there is one glaring difference that matters more than anything else. That difference is that the person playing the deck wants to win with Pathbreaker Ibex or Triumph of the Hordes and not Craterhoof Behemoth.

So, I am not saying that the solution to the staple problem is to only play with budget decks. I know that a lot of players are uncomfortable with the idea of intentionally using sub-par cards in their decks. I understand this concern and agree wholeheartedly.

Rather, I am suggesting a change in deckbuilding philosophy that switches the focus away from must-have cards and towards cards that contribute to an unique but powerful deck.

Prominent content creators like The Command Zone recommend a template for building decks. This template includes a certain number of card draw, ramp, removal, board wipe, and synergy cards. Unfortunately, I believe this deckbuilding method contributes to the staple problem we have been discussing.

If your deck consists of categories with empty slots that need to be filled, the easiest way to fill them is by using staples. Just find the best card draw, ramp, removal, etc. in your colors and jam them next to whatever else you want the deck to be doing. These cards will likely have little to no synergy with the deck’s primary goal.

On the other hand, if we were to start deckbuilding by filling the deck with synergistic pieces, we can fill in whatever is left with generically useful cards. This method encourages deckbuilders to meet their deck’s needs with high-synergy cards rather than defaulting every time to the same 30 staples everyone always runs.

As a result, we use fewer staples and make more unique decks.

The Real Problem With Staples

It takes almost no thought to use a deck full of the 99 most powerful cards available. If we need a ramp spell, we go with one of the many that we have already used a thousand times. We never give ourselves a chance to consider there might be other options that work better for our individual decks.

No Card Should Be An Auto-Include

I touched on this earlier, but I want to expound upon what I mean. We usually use staples because those cards are considered to be the best version of the effect we are looking for.

However, this attitude eliminates the possibility of finding a card that is better for a specific deck. For example, Swords to Plowshares is the most efficient white spell for removing creatures. If we play that as our removal in an enchantress deck, we miss out on getting more value from something like Darksteel Mutation.

For this reason, I propose that no cards should go in every deck. That’s right, not even Sol Ring.

Consider Every Card In Your Deck

What I am saying, then, is that you do yourself a disservice by saying that Sol Ring or any other card is an “auto-include” in any deck. The reason for this is because you stop questioning if there might be a better option available and default to an easy staple.

In order to eliminate the staple problem and become a better deckbuilder, it is important to give careful consideration to every single card in your deck. As you go through, you might find that certain cards are just not as good as something else you could play.

In the case of Sol Ring, you will likely find more times than not that the best decision is to include it in your deck. There are decks, though, that do not want Sol Ring in them, even if they are few. One such example might be a Seton, Krosan Protector Commander deck.

You should even consider which lands to put in your decks. The more attention you pay to your mana-base, the more opportunities you find to include synergistic cards.

I have been mentioning the word “synergy” a lot in this article. What’s the big deal? Why do I care so much about having a synergistic deck? It is because I believe that a synergistic deck is more powerful than a deck of powerful cards.

Allow me to defend this claim. Commander is a game of resource accumulation. Players spend the first several turns drawing cards, fetching lands, and setting up whatever engine they are going to use to win the game. With each turn, players become more and more powerful.

We can graph this progression linearly. Every time a player gains another resource (land, card advantage, attacker, etc) they get a little bit more powerful. However, the player can only every be as powerful as their most powerful card.

Synergy, on the other hand, can be graphed exponentially. The process might start out weaker and slower in the beginning, but quickly gets out of hand.

Early we mentioned enchantress decks. Those are a great example of synergy. Fertile Ground is probably worse than Rampant Growth in isolation, but when it is paired with cards like Argothian Enchantress, Estrid, the Masked, and other such effects it becomes the better card by a significant margin.

Staples tend to have raw power and not be very synergistic. The reason they are so popular is because they generically go in any deck. They might have incidental synergy, but typically they are powerful in a vacuum and that’s it.

As I said before, when you fill your deck with high-synergy cards you do not have room to run as many staples. In addition to that, you don’t miss the staples because your synergistic cards become more powerful than any individual staple could ever hope to be.

You will find cards that you have never heard of before because they only work in your deck. This will make your games of Commander more exciting for everyone.

If Jeweled Lotus has you down, just don’t play with it. One of the best parts about Commander is that the experience is a part of the game. You can include whatever rule or restriction you want on the game as long as your playgroup agrees. Anything that makes the game fun for everyone is net-positive.

Let me know what you think about building your decks around synergy, rather than staples. You can leave a comment down below, or you can find me on Instagram or Twitter. And don’t miss out on any of the other awesome articles, such as: