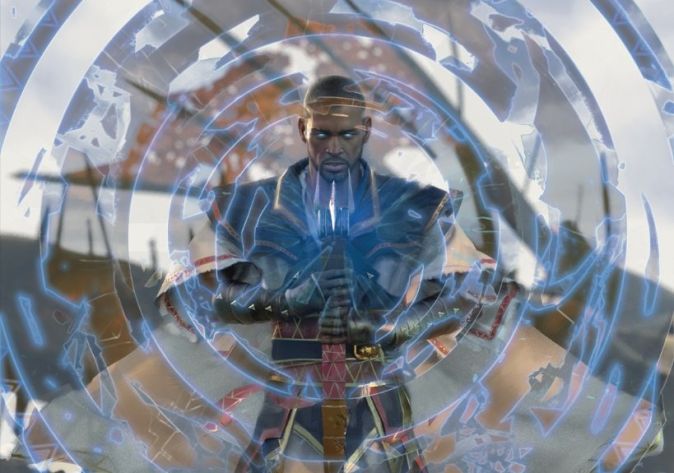 Even though Ikoria just released recently, Magic players already look forward to the next one. So that’s why today we’ll talk about Core Set 2021 spoilers and everything else.

Here you’ll find Core Set 2021 spoilers (once they become available), all currently known information about M21, possible teasers and more. Spoiler season is real fun, so let’s get right to it!

There will be plenty of different products with this set. Here’s just a quick recap, but if you want a more detailed information you can find all Core Set 2021 products here.

You’ll get your regular Draft Boosters (available separately, in a Bundle or in a Booster Box), as well as Collector Boosters, which will appear for the first time in a Core Set. If you want to know more about them, you can read about Ikoria Collector Boosters here, so you’ll get some sense of what to expect.

Two weeks after Core Set 2021 release, we’re also getting a special new product – Jumpstart Boosters. The basic idea is to mash two of these boosters together and have a playable deck. You can find more information about Jumpstart Boosters here.

We’re also getting a Deckbuilder’s Toolkit, which is a great way to boost your deckbuilding skills and a Starter Kit.

Last but not least – a great product for newer players is returning. Planeswalker decks are back! These 60-card decks also contain a Arena code for copy of the same deck on MTGA.

Remember how Core Set 2020 was all about Chandra? Well, this time around, the main planeswalker is Teferi.

Both cards from regular Standard sets (Hero and Raveler) had a tremendous impact on Standard and some older formats.

Teferi is often a synonym for control decks, so most players really love his cards or really dislike them. In which group do you belong? Tell us in the comments bellow.

Mark Rosewater (aka. Maro), the Head Designer for MTG has once again posted a bunch of teasers about the upcoming set. Let’s see what those are and try to figure out what they could possibly mean.

We’re getting a brand new planeswalker, from a plane that we’ve visited. By that, Mark means that previous Magic set has featured this world.

Our prediction was that we might get a new white planeswalker, since Gideon died in War of the Spark. The following leak has confirmed our prediction.

We’re getting at least two enchantment cards, but almost surely plenty more. There’s an aura inspired by a cycle from Urza’s Saga block. Any idea what this could be?

Aura is evergreen, so that leaves us with four options. Our predictions is that we’re getting Shrines, as the old ones such as Honden of Life’s Web were recently featured in Historic Anthology in Arena, which would make a very nice foreshadowing.

Furthermore, Core Set 2021 has a card that lets you draw half of your library. That’s probably a blue one, right?

We’re also getting a card that offers you lots of different options – 31 to be exact. We have no idea what this could possibly be.

There’s a card that uses a non-evergreen ability (named one) over 20 years old. Hopefully, it’s not banding. (If you don’t know what banding is, we surely can’t explain it here. That’s stuff would take a couple of articles to do right.)

We’re getting a tribal lord, that gives creatures of a certain type +1/+1. Like Drogskol Captain for Spirits. It’s a creature type, that never had a tribal lord, even though it has over fifty cards in print already.

We also know that there’s a card with the following pieces of text:

That’s going to be one busy text box. Maybe another one of those overpriced red enchantments?

Finally, there’s a card that – and we quote – “gains all activated abilities of a certain subset of cards in a place it’s never done it before”. Honestly, we don’t quite get this one.

That’s not all that was teased by Maro. There’s also some fun reprints in this set. Maro stated that Core 2021 contains the reprints of:

There’s also a reprint of a Human Monk and there are 54 of these in Magic. The optimists predicted Azusa, Lost but Seeking, which proved to be in the set!

We’re also getting an aura (a popular one!), which started as a part of a cycle. Our best guess would be Rancor, which is a pretty strong card and would work nicely with constellation theme from Tehros Beyond Death.

Another great teaser is not one – but two cards played in tournaments that have been reprinted 20+ times with at least 5 different pieces of art. Could you imagine Lightning Bolt coming back to Standard?

You can find the full post on Maro’s Blogatog. If you have nay speculations about, which cards these may refer to, tell us in the comments bellow.

Wondering when does Core Set 2021 come to Arena? You’ll find this and other important dates in the following table.

You can also find the exact time of Core 2021 release on Arena here.

That’s all we know about Core Set 2021 spoilers so far. It’s not much, since there’s still plenty of time before the set releases. However, once we get closer to release, we’ll update this article with all news about the newest set. So make sure to come back again.

If you don’t want to miss new Magic spoilers once they’re available, follow us on Facebook or Instagram. You’ll get daily spoilers during the preview season. You’ll also get reminders about Daily Deals on Arena (like free 500 Gold), new strategy articles (like our Core Set 2021 Draft Guide) and more!

So that’s all for today – until next time, may your favorite color get an amazing card in Core 2021.