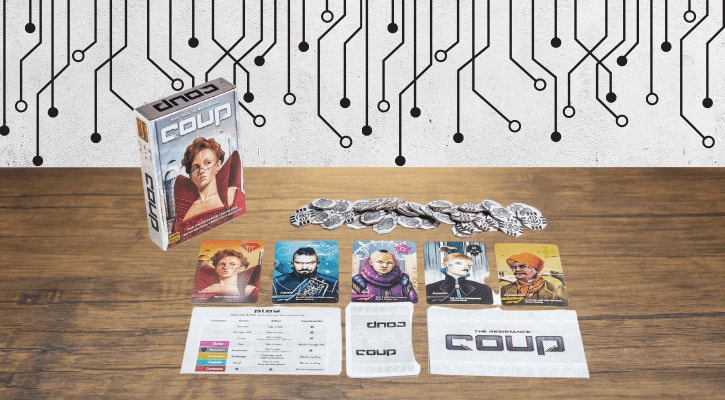 The Coup board game is extremely easy to learn and master. It is engaging and fun. This is why it has gained popularity as one of the best indie games out there.

From its creation in 2012 many casual and hardcore tabletop gamers have recognized it as one of the best board games out there. However, you might be asking yourself if Coup is worth buying, and which Coup version and expansions are the best to get.

This is the goal of this article; to give you the best explanation about the main core mechanics of the game, and which expansions are worth buying to expand the experience of the game.

The game was officially released in 2012 with the original name being: Coup: City State. There were many revisions and name changes. It first changed to Coup: The Resistance and later into Coup: Dystopian Universe, which is the way it is known today.

The game’s aesthetic revolves around the concept of a Dystopian futuristic universe. Its theme is a mix between current political concepts with a futuristic setting and art style. The game mechanics follow the theme of political intrigue and deception.

The goal of the game is to eliminate all other players and be the last one standing following a series of different actions taken by each player.

Let’s do a quick overview of the Coup game setup:

Each player gets two cards at random upside down and two coins. From here on the game is turn-based.

Each player gets one turn in which they can perform one single action. This action is determined by the cards they have. Each card can perform a different action and reaction.

The player can decide to claim with a specific card – they might actually have it or, just bluff it. The action can be as simple as just taking one coin from the remaining in what is called income or it can be impactful as engaging in a coup, which can be triggered by spending 7 coins.

A coup is targeted towards one player and that player discards a card. Once a player loses all their cards, they lose. A player can also lose a card by making a claim that they have one specific character card and being challenged by another player that thinks that the previous player does not have that one card.

The game here becomes about deceiving and trying to find out if other players are being honest or not.

In general, it becomes a really socially heavy and personality driven board game, which any playgroup would enjoy.

The base of the game include the following:

Coup Expansions – Which one to Buy?

So, what to do after you and your playgroup have familiarized with the gameplay? Is there a way to expand this fun experience? That’s where the following expansions come about.

There are many different expansions and it can be hard to decide which one to get. Worry not, as we’ll take a look at all of them and figure which one is right for you.

Many seasoned Coup players really like this expansion. It follows the already established rules of Coup and it introduces two new ways to play. It introduces the Inquisitor role, a way of playing called Factions, and enough cards to have a 10 player game.

You can use the new rules can with some improvised adaptation of the base game, so it’s best for more experienced gamers. You can play the Ambassador character as the new Inquisitor.

All in all, it’s a pretty good expansion if you want to play with more than 6 players, or if you just want to try the new game modes.

This is a mini expansion introduced to the game. It presents the role of the Socialist, which replaces the Ambassador.

This expansion, in my honest opinion, is not worth getting if you are a casual player. If you consider yourself a big fan of the game or just wants to have the cards with the cool artwork, then it is a simple and cheap addition to the game.

If you are only interested in the new mechanic the Ambassador can be played as the Socialist, which makes this expansion unnecessary.

This is a standalone game, which is basically an upgraded version of the original Coup. If you thought the last expansion was small, this one is the complete opposite. It brings to the table an incredible amount of new content and ways to play the game. It introduces so many new components that it may be overwhelming at times.

Rebellion is a way to play the game with more intricate mechanics and roles.  It introduces additional roles to the already established ones found in the base game. This makes the game have more replay value and variety, instead of the repetitive but exciting gameplay of the original set.

Although this is the case, I recommend this expansion only to seasoned players of the original game. It introduces far too many new components for new players. It would make the game pretty confusing and convoluted for someone who hasn’t played it. So, this is definitely not the product for beginners.

On the other hand, if you are interested in spicing up gameplay, adding new roles, and changing the dynamics of the game, this expansion is excellent. Due to the incredible amount of ways of playing, the game feels fresh whenever you play it.

The learning curve is a big one and familiarization with the new components is key, but if you are willing to do this, then this expansion is worth it.

This expansion is an addition to the Coup: Rebellion pack. As mentioned before, the Rebellion set is a game in its own. This means you don’t need the original Coup set.

This new expansion adds an extra 7 roles to the game. This makes the game even more varied and complex.

I recommend this expansion only if you really enjoyed the Rebellion set. I wouldn’t recommend it for new or casual players.

In general, the new gameplay mechanics do change the game splay somewhat, but they aren’t necessary. The base game in itself is enough.

Deluxe Edition provides new artwork to the original role cards, and includes the Inquisitor role found in the Coup: Reformation expansion as well as being able to play with Factions.

This set is a great way to have a new small and portable version of the game. It is also a good addition in terms of artwork if you are a collector, and it is also a good way to play with the Inquisitor role cards without having to buy the Coup: Reformation expansion.

In general this version of the game is a great way to get started if you are interested in having different artwork and the Inquisitor role card.

Coup is an excellent game to spend free time with friends and family. It will be fun for anyone who loves bluffing and strategy based games. The mechanics are simple and easy to understand.

The expansions add extra flavor and ways to play, which expand the lore and the replay value of the game. The different artwork and version of the game make it extremely appealing for collectors.

Coup: Rebellion G54 and Coup: Anarchy are incredible expansions for collectors. There are always different versions with specific artworks out in the market which might be your thing.

Anyways, I hope this article has been helpful at introducing the game and at helping you choose which expansion to make. As always, if you have any questions or thoughts about the article, feel free to leave a comment below.

If you’re looking for more games to try out, you might want to read the following articles: