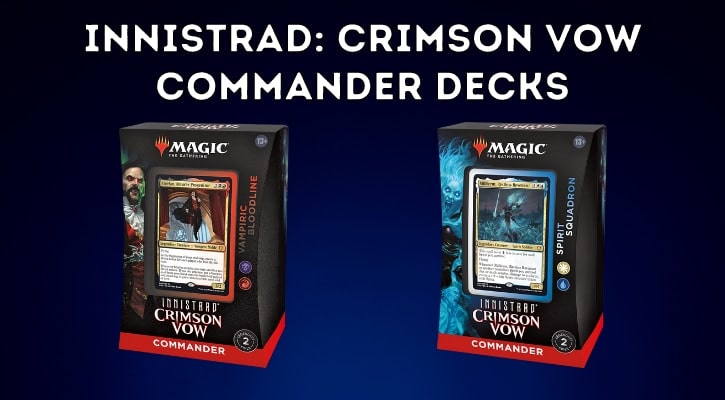 We’re getting not only one, but two Innistrad sets in 2021. Alongside the second set, we’re also getting two Crimson Vow Commander decks. In this article, we’ll share everything you need to know about them, including:

It certainly looks like it’s going to be a fun time for fans of tribal Commander decks. Anyway, we certainly have a lot to talk about, so let’s get right to it.

As we said, we’re getting two Crimson Vow Commander decks. The first deck is Vampiric Bloodline and the second one is Spirit Squadron. You can order both decks on Amazon.

As you might know, Wizards released intro (or lite) Commander decks with Kaldheim, Zendikar Rising and Commander Legends. These deck had lower power level and lower price. For an example, you can take a look at Kaldheim Commander decks.

So, the question is: Are Crimson Vow Commander decks intro decks or the full versions?

Crimson Vow Commander decks are fully powered. This means you can expect powerful decks with 15 exclusive new cards in each one and with exciting reprints. The new cards are thematically tied to Innistrad, but the reprints can be from anywhere.

Besides the foil version, you also get the display version of the main commander. This card is slightly thicker, and isn’t meant for competitive play. You can use it in your command zone, so you don’t accidentally shuffle it into your deck.

This is a Vampire tribal deck. Few years back there was a Commander precon build around Edgar Markov and it was a very popular one. Hopefully, this one will live up to the hype.

Let’s take a closer look at the decklist, and see if that’s likely.

*These are the brand-new cards. You can see all of them in the next section. The rest of the cards are reprints.

Strefan, Maurer Progenitor is certainly an interesting card. 3/2 flyer for four mana is quite weak, and an extra toughness or two would make the card better, but — it is what it is. Besides, when it comes to commanders we’re more focused on their effects, and not so much on the stats.

For starters, you get to make a Blood token for each player who lost life that turn, at the beginning of your end step. Commanders that promote attacking are always fun, and it’ll play nicely in multiplayer. But wait, what’s a blood token? Well, it’s this little artifact:

So essentially, you’re getting a one time effect that lets you discard a card to draw a card. Useful, but not particularly broken. Of course, you can pair it with madness cards, like Stensia Masquerade, which plays nicely in the Vampire tribal deck. You can learn more about Blood tokens here.

Speaking of Vampire tribal, that’s what Strefan’s second half focuses on. Plus, it gives you more use for Blood tokens. When Strefan attacks, you can sacrifice two Blood tokens, to get a Vampire from your hand onto the battlefield for free! It’s also indestructible for the turn, and it’s attacking.

All in all, Strefan, Maurer Progenitor looks like a build-around Kaalia of the Vast. It’s a great card for a Vampire tribal deck that looks to do something a bit special. There are plenty of ways to build around it, as you’ll surely see in our Upgrade article, which is releasing later in November.

Compared to the Edgar Markov deck, this deck loses White. That was to be expected, given how the Vampires looked like in the Midnight Hunt set. They were only in Black and Red, and rewarded you if an opponent lost life. Here are a couple of examples:

These two cards weren’t included in the deck, but they were early hints towards how Vampiric Bloodline decklist will look like. As you can see from the decklist, there are lots of tribal synergies, and to sneak in and deal damage to your opponent. All of this plays nicely with Strefan’s abilites.

If you’re excited about the deck, you can find some of the best Vampire tribal cards here.

Hey, it’s another tribal deck. Of course, this one is centered around Spirits. The Spirit tribe is most often found in White and Blue, as was also the case in Midnight Hunt. There wasn’t a two-color dedicated Spirit tribal commander before, which makes a Millicent a nice breath of fresh air.

*These are the brand-new cards. You can see all of them in the next section. The rest of the cards are reprints.

Seven mana is a lot for a 4/4 flyer. Millicent has to do something fantastic, in order to be worth the investment. Thankfully, its first ability helps you already. It costs 1 mana less for each Spirit you control. So, you will have to build heavily in the Spirit tribal theme. If you do, you’ll be able to cast Millicent for cheap, and it also helps you with the Commander tax.

The second ability is also very useful. You make a 1/1 white Spirit token whenever a nontoken Spirit creature dies. That includes Millicent, which is great, as the token will already count towards its cost reduction.

But that’s not all — you also get a 1/1 Spirit token, whenever Millicent or another nontoken Spirit token deals combat damage to a player. Now that’s some serious token generation. The ability also rewards you for going for an aristocrat type of deck. (That’s a deck that has a bunch of sacrifice outlets and payoffs.)

All things considered, Millicent looks not necessarily weaker, but certainly different from Strefan. It can hold its own, and be a really fun Commander to build around, as it lets you explore a not-so-common tribe.

That’s all about the Crimson Vow Commander decks! If you have any predictions of your own, make sure to let us know in the comments below.

If you can’t decide which deck is your favorite, you can simply get both of them on Amazon. Usually the decks that come in pairs are balanced around each other out-of-the-box. This way they also make a fine game for two players without the need to add any additional cards.

Furthermore, if you’re looking for the next Commander precons, check our article about Kamigawa Commander decks.

If you’ll buy a new deck and don’t want to take your old one apart, you might want to get a new box for your deck. In that case, check our picks for best MTG Deck Boxes for Commander.

If none of the decks we’ve talked about aren’t to your liking, maybe you’ll prefer Innistrad: Midnight Hunt Commander decks or some other Commander precon. Additionally, you can find all Crimson Vow spoilers here.

Until next time, have fun, and may your commander survive a long time on the battlefield.