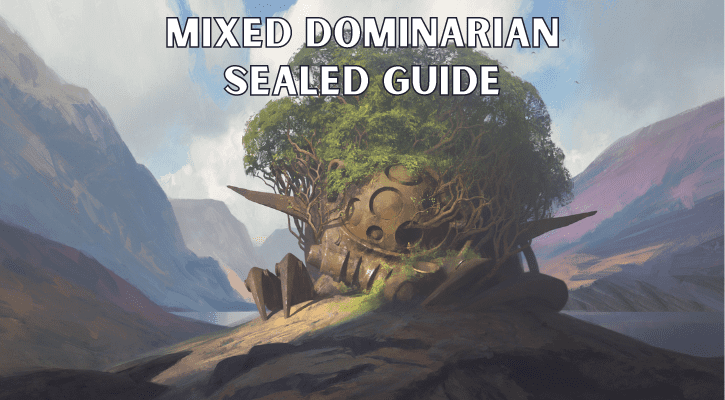 Hello, friends! Hopefully, you’re doing well in the Decathlon event, but if you’re not, there’s still time to get 3 or even 7 Tokens to get to the finals. One of the first opportunities you’ll have is with the third Decathlon event, Mixed Dominarian Sealed.

We won’t cover every event here, but since I really enjoy Limited, I’m going to try to help you with those. I feel that Sealed is often misunderstood as a pure luck based format. Sure, there will be games where some powerful rares will beat you, and there won’t be much that you could do about them. However, these games happen less frequently than one might think, so you should instead focus on better deckbuilding, and game play decisions. After all, these are the only things that you can control.

In this Mixed Dominarian Sealed Guide, you’ll find six applicable tips for getting to seven wins in the third Decathlon event.

What is Mixed Dominarian Sealed?

This is an event where you open the following six boosters:

You build a 40-card deck with cards that you get in them, and you battle against other players. In the Dechatlon event, the goal is to get to seven wins before you lose three times. If you manage to do so, you double your entry fee, and you get a finals token.

If you want to refresh your memory, you can find all available cards with this Scryfall search. With that’s said, let’s dive deep and explore how you can get that Finals Token.

Even though I said that Sealed is less luck based than most people think, that doesn’t mean that the rares don’t matter. Quite the opposite, The rares are very relevant. You have to figure how you can utilize yours, and beat the opponents’ ones.

So our first tip is that you really try to play your best rares in Mixed Dominarian Sealed. There can be a problem of having a strong rare in a color that doesn’t have much other playables. In that case, you have three main options:

The stronger the rare, the more you should dismiss the last option of not playing it. Which of the first two options you should choose depends on the casting cost of the rare. Shivan Devastator can be easily splashable, and it’s so strong that I’d put it in my deck even if I didn’t have any other fixing than two Mountains.

Multani, Yavimaya’s Avatar on the other hand, is much harder to splash, as it costs two Green mana. With it in your pool, you want to pair Green with another color that allows you to get to 22-23 playables.

If you have a medium rare, don’t feel like you have to play it. Let’s say that your Black cards aren’t great. There’s no need to try to fit something like Ashnod, Flesh Mechanist in your deck.

If you don’t have amazing rares, you might have better luck with your uncommons. There are some that are stronger than most rares in the set. The majority of them come from the original Dominaria set. Let’s take a look:

There’s also Icy Manipulator, which isn’t as good as these cards, but will fit into any kind of deck. Newer players often underestimate this effect. If you have a Manipulator in your play, just put it in your deck, it will win you games.

What if you’re truly unlucky, and you don’t have any remarkable rares? Or perhaps you have a good rare in a very shallow color? Well, in that case, it’s time to build an aggressive deck.

If you’re going to play a long game, your opponents will eventually draw their bombs, and they’ll overwhelm you with them. That’s why your best bet is to beat them before or immediately after they deploy their rares.

In order to do that, you’ll want to have a really low mana curve. Include lots of two drops, even if they are weaker than some of the more expensive creatures. The more expensive cards should really be strong to justify their inclusion in the deck.

Most of the cards in your deck should be creatures that can attack at least somewhat well. The rest are removal spells, and combat tricks. The later can act as pseudo removal spells in such a deck.

If your curve is very low, you can also get away with playing 16 lands. Then you just have to hope that you’re fast enough, or that your opponent will stumble, with their more clunky deck.

A lot of rares in these three sets can be at least somewhat cleanly answered with a removal spell. However, you usually won’t have a ton of them in your pool. That’s why it’s very important that you don’t waste your premium removal spells, such as Overwhelming Remorse or Fight With Fire on medium creatures. If your opponent has a random 4/4 that’s currently good on board, but you’ll probably be able to handle eventually, you better save your removal for something like Lyra Dawnbringer.

The exception would be the previously mentioned aggressive decks. If using a removal spell allows you to make a strong attack, and subsequently deal lots of damage, then you should just go for it.

4. Ignore Synergies (For the Most Part)

In each of the three sets, there are some build-around cards. However, they often need a critical mass of synergistic cards in order to work. Since each set is mostly trying to do its own thing, this can be hard to achieve.

For example, Dominaria has Adeliz, the Cinder Wind, which was amazing in Dominaria draft, and – depending on your pool – often good in sealed as well. One reason that it was able to work was that there were seven Red or Blue Wizards at common. However, there are only six of them in both Dominaria United and Brothers’ War combined. This means that you’ll have fewer cards to enable Adeliz on average.

You could still potentially have the right mix of cards that it would be correct to play Adeliz, but this will happen less regularly. The same thing goes for most of the highly synergistic cards.

Given that we were just recently drafting Brothers’ War, it’s important to keep in mind that the artifact synergies will also be much weaker. The other two sets simply don’t have lots of good artifacts.

All in all, this means that, for the most part, you shouldn’t try too hard to enable specific synergies. Instead, you should simply build a deck with cards that are good on their own, have a solid curve and a decent mana base.

5. Pay Attention to Your Lands

Speaking of mana base, this is an area that players sometimes ignore. The deckbuilder automatically adds 17 lands, so it’s easy to just click Confirm and start playing.

However, you should really think about how many and which lands you want to play. As we mentioned before, if you have an aggressive deck, you can go down to 16 lands. On the other hand, if you have a really powerful deck, with good late game, you might want to consider 18 lands. You really want to hit your land drops to play your more expensive cards consistently.

As far as the which lands you should play, you can consult this article by Frank Karsten. He did the math, and the article really helps gives you a feel of how bad the mana bases in Limited typically are.

If you have an on-color Memorial from the first Dominaria set, then you want to include them in your deck, as they’re very good. The only exception is the Red one – Memorial to War is just bad.

This is not a tip that’s specific to Mixed Dominarian Sealed. It would improve your win rate in all matches of Magic. However, this time around, this is especially important.

These three sets haven’t been mixed together before, at least not on Arena. There will be lots of weird and unusual interactions happening. Don’t just play as fast as you can. Once you have found a good line, think if you can do something better. You should think your whole turn through before you start to make actions.

You can find more information on how to improve at MTG here, but for this event, try to slow down your play at least a little. Perhaps, you’ll be surprised at how better you’ll end up performing.

This is true not only during game play, but during deckbuilding too. There’s no time limit for you to build your deck. Try out multiple configurations, and once you do, give another look to each card in your pool, if you have missed something that might be good in this specific build.

You should also check your deck between games. Perhaps there’s a card that isn’t working in your deck for whatever reason. Swap it for something else.

Anyway, that’s all for today. If you want more resources to help you with the Decathlon 3 event, you can also check our general MTG Sealed Guide.

Furthermore, if you like this type of event, you might enjoy Dominaria Remastered. It’s a set that mixes all the Dominarian sets. Sadly, it won’t come to Arena, but it will be available in paper, and on Magic Online. If you’re looking forward to drafting it, make sure to check our Dominaria Remastered Draft Guide.

Until next time, have fun, and may you reach seven wins in Dominarian Mixed Sealed with ease.