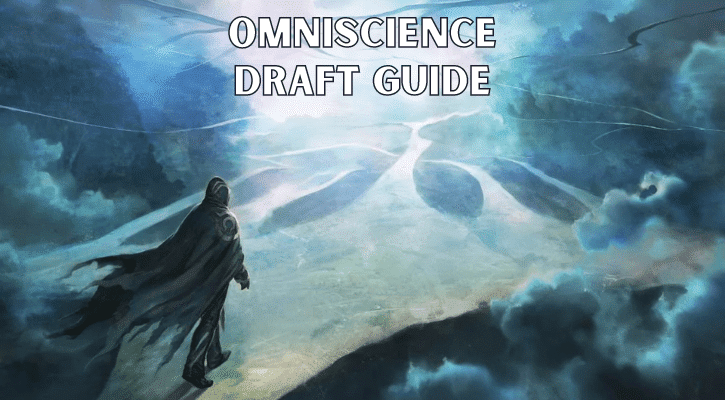 Hello, friends! The Decathlon event is in its final stages, but you still have an opportunity to get two more Tokens. Today we’re going to take a look at some quick tips for how to win more games in the ninth Decathlon event, Omniscience Draft.

What is Omniscience Draft?

The Omniscience Draft or “Best-of-One Mixed-Up Pack Phantom Bot Draft”, as Wizards calls it, is a draft where you draft cards from various sets on Arena, and then you play the games, in which both players have the Omniscience emblem in play. Besides, your starting hand is now 3 cards.

So, you can play all your spells without paying their mana cost. Once per turn, you can also click on the emblem, and it’ll give you 5 mana (one of each of the five colors). This mana can be useful for paying for activated abilities or other additional costs.

This completely changes the game of Magic, and it’s not uncommon to win on turn two. So, let’s take a look at some tips on how you should draft and play this weird game mode.

Since all of your cards cost zero mana, and you only start with three cards in hand, it can be easy to run out of gas. That’s why the most important cards that you can get are cards that can draw you multiple cards. Something like Divination is often the best card in the pack, unless there’s a card that can draw you even more cards.

You should, resist the temptation of picking a random big rare Dragon over a card draw spell.

Even cards that just draw you a single card are better than a random filler, as they can get you to your cards that actually matter.

The next group of cards that is quite good are the counterspells. You especially want the ones that can counter any kind of spell (Dissolve), and isn’t restricted (Essence Scatter).

They will be the only interaction available on turn 1, when you aren’t the starting player. Don’t just use them on a random big creature. Save them for a powerful card advanatage spell instead.

Winning the die roll is quite important in Omniscience draft, but if you want to mitagate that, you’ll want to get some counterspells.

Don’t Be Afraid to Mulligan

It can be scary to mulligan a 3-card hand. However, if you only have three mediocre cards in hand, without any card draw, you should probably just take a mulligan. You get a new hand of three cards, and hopefully there will be a card draw spell among them, with which you’ll be able to combat card disadvantage.

Sometimes in the previous iterations of this format, the first mulligan was free. If that’s the case this time around, then you should definitely take advantage of it and grab a new hand, if your first one isn’t amazing.

However, if your deck is very low on card draw spells, it’s better for you to take fewer mulligans.

How Many Lands? Zero.

This tip might be obvious, but a new player might not think about it, as it’s quite weird. Since all of your cards cost zero mana, you don’t have to play lands. Anything is better than a land, even a random two mana 2/2 (although it would also be quite bad).

You’ll end up with 42 or 45 cards in your pool. The exact number depends on whether there are basic lands in the packs or not. Since you aren’t playing lands, you only have 2–5 cards to remove. That’s why the last picks you make will also matter, and you should pay attention to them.

Hopefully, these tips will help you get to seven wins in your Decathlon 9 event. Omniscience draft is certainly play/draw dependant, but it can be a lot of fun – especially if you’re winning.

If you’re looking forward to the next actual set, you can find Phyrexia spoilers here. For Commander fans, there will be two Phyrexia Commander precons released, both of which look quite fun.

Until next time, enjoy Magic, and may you draw tons of cards in your Omniscience draft.