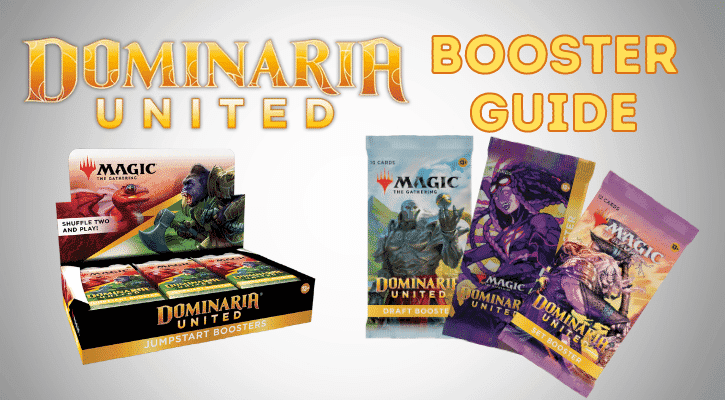 Each MTG set nowadays comes with multiple different boosters. Even among the boosters of the same type, there can be differences from set to set. If you aren’t a very enfranchised player, it can be hard to keep track of them all. That’s where this Dominaria United Booster Guide can help you.

We’ll take a look at every booster product in Dominaria United. You’ll learn how many boosters does each type of booster box have, and what’s in the specific booster. This way, you’ll be able to decide which is the best Dominaria United booster for you.

We’re starting with Draft boosters. If you’re a returning player, these are the same as the ones, we simply called boosters, as there were no other types.

As the name suggest, these are best, if you plan to draft with them. You can also use them for various other game modes, such as Sealed, Pack Wars, etc. If you have two players, you can each use 6 Draft boosters, build a deck, and play Sealed against one another. If you decide to get a whole box, you can repeat this three times.

We have to mention that these are the cheapest Dominaria United boosters, if you’re considering only price per pack. So even if their primary purpose isn’t to just open them for fun, you can still do so.

The basic land slot has a 33% chance to get upgraded into a foil card (of any rarity). Each pack also contains at least one legendary creature. While not confirmed, this could also mess a bit with a rarity distribution – but only in a good way. (One of your lower rarity slots could be upgraded to a card of a higher rarity.)

On average, around 12 basic land slots will get upgraded to foils of various rarities. You’ll also get at least 36 legendary creatures. On top of that, there’s also a Dominaria United Box Topper.

Wizards figured that a lot of players are simply opening boosters, without planning on drafting the cards. However, the Draft boosters weren’t really designed for that. That’s why they introduced Set boosters.

These contain 12 cards, but they will be more interesting than the ones in a Draft booster. You’ll get stuff like cards with alternate art, guaranteed foil, art card, and chance for multiple rares, and perhaps even a card from The List.

As far as the price goes, these are usually a bit pricier than Draft boosters. On average, you’ll get the same amount of rares per dollar spent, although here you also have stuff like guaranteed foil and alt-art card.

In short, if you just want to get a bunch of Dominaria United boosters, and open them, you should go with Set Boosters.

Among these cards, you can expect a foil card, and a card with alternate art. You can learn more about Set booster odds and slots here. There’s also a legendary creature in every pack.

Of course, among these you get 30 foils, and 30 alt-art cards. Additionally, you can also expect a Box Topper.

Here’s the most expensive, but also the most exciting booster from Dominaria United. Each Collector booster is full of exciting cards. There are multiple rares in each one, plus all the cards have either alternate art, or are in foil.

So if you have the money to afford it, and you want to get as many cool and exciting cards, as you can get, then Dominaria United Collector Booster is the way to go. The cards in these boosters are usually one of the most expensive ones in the set, and we see no reason for that to change with this set.

As we mentioned before, all of these will either be in foil, or have alternate art. Sometimes even both. At least 10 cards will be in foil, and out of them at least 2 will be legendary creatures.

On top of that, you could get a Lost Legends card. These are cards from one of the early MTG sets, Legends. Each Dominaria United Collector booster has a 3% chance of containing such a card.

There will be at least 120 foil cards, and at least 24 of them will be legendary creatures. As with the other two boxes, you also get a Box Topper.

We had Jumpstart boosters before, but always as a separate product, and not as a part of a big set. This is about to change with Dominaria United.

Jumpstart boosters are one of the best ways to both build a collection, and quickly jump into playing Magic, while doing so. How? The rules are simple for a 1 vs 1 game:

Each Jumpstart booster has a specific theme, which spices up the game play. Of course, they also contain enough lands, so you can actually play the games without the need to add them yourself.

One neat thing with these boosters is that you really get that vanilla Magic experience. You simply play with the cards that you opened.

One thing to note here is that Jumpstart booster box, doesn’t come with a Box Topper.

We discussed all four major type of Dominaria United boosters, but that’s not every product from Dominaria United. Let’s see what other products is this year’s autumn set bringing us.

As with every set, we’re also getting Commander precons. These are 100-card, ready-to-play decks. This time around, we’re getting two:

These are great for both new players, who’re just starting with Commander, and for more experienced ones, who’d like to expand their collection with a brand-new deck. You can find all information about Dominaria United Commander decks here.

Dominaria United Bundle are basically 8 Set boosters, packed in a nice looking sturdy box which can be used for storage. On top of that, you also get some other accessories, such as:

So if you’re already buying Set boosters of Dominaria United, you can instead get a Bundle – at least if you like the extra stuff that you get alongside it. If not, it’s better to simply just get the boosters themselves.

Dominaria United Draft pack is simply three Draft boosters bundled together. The main benefit of these is for players who wouldn’t like to buy a whole Draft booster box, but only some boosters. With the Draft pack, you avoid buying loose boosters, which can often be tampered with.

Another benefit with is for drafting. You simply buy one Draft pack per player, and you have the exact number of boosters you need for a Draft.

That’s it! We’ve covered every product and booster type in Dominaria United. If you still have some questions about this topic, don’t hesitate, and ask it, in the comments below.

Until next time, have fun, and may you open that one card you really want in your very next Dominaria United booster.