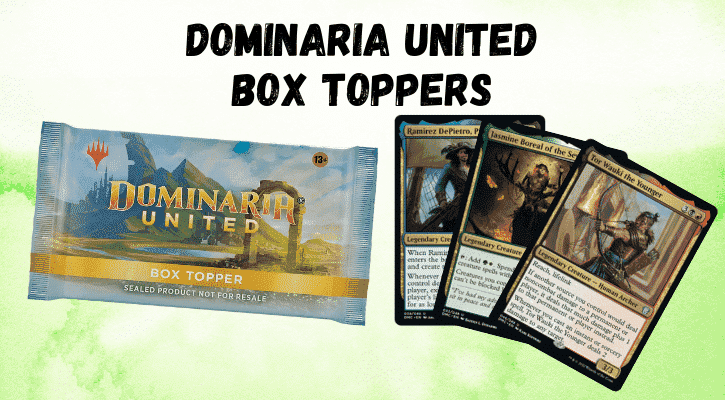 What Are Dominaria United Box Toppers?

Dominaria United Box Toppers are cards that you get as a reward for buying any (except Jumpstart) booster box of Dominaria United (get one on Amazon). They are also called Legends Retold, and come in a sealed booster pack, containing exactly one card.

There are 20 different cards that you could get. Each card is a new take on a Dominaria legendary character from the past. These characters, while somewhat iconic, are nowadays pretty weak (for example RamirezDePietro). That’s why it’s pretty cool for them to get an update, more powerful cards.

The new cards are also mostly creatures, but there is one new planeswalker among them!

How to Get Dominaria United Box Toppers?

You can get the Dominaria United Box Toppers by buying either:

Besides that, these cards are also available in the Collector boosters. However, there they won’t have the regular foiling, but they will either be non-foil, or foil-etched.

If you’re buying a booster box from your local store, and you want to get a Topper, make sure that they didn’t run out of them, as that can sometimes happen. You can also order your box on Amazon.

If you want to compare the new legends to their old counterparts, you can use the following table to do so.

That’s everything we know about the Dominaria United Box Toppers so far. Make sure to check back soon, when we’ll update the list with new cards, as they get previewed. If you don’t want to miss them, you can follow us on Facebook or Instagram.

If you want to read more about MTG, you can check the following articles:

Until next time, have fun, and good luck with pulling your favorite Dominaria Box Topper!