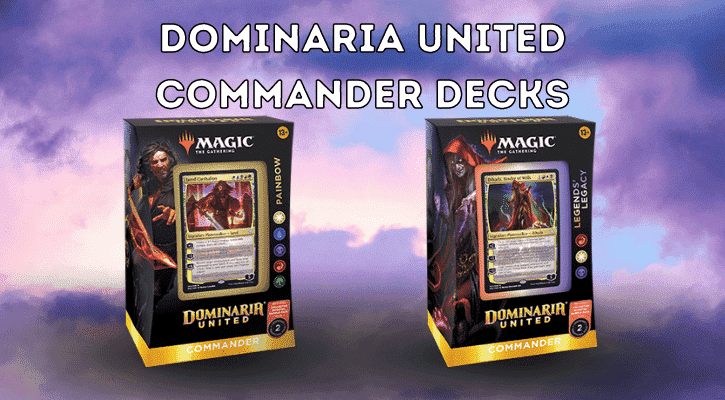 In today’s article, we’ll talk about everything you need to know about the Dominaria United Commander decks. We have a lot to share with you, since full decklists have been previewed, and you can find them below. We better get right to it!

There are 2 different Commander decks in Dominaria United. It was a while, since we got just two Commander precons with a regular set. The last time this happened was in Kamigawa: Neon Dynasty, back in February 2022.

The two decks are:

From the hundred cards in the deck, 90 of them are reprints (or cards that first appeared in the main Dominaria United set), and 10 cards are brand-new, exclusive to these decks.

Collector Sample booster is a somewhat new addition to the Commander precons. As the name suggests, these aren’t regular boosters. You only get to cards in it:

So even though you’re getting only two cards in the booster, they could be quite exciting. If you’re lucky, you might even get a money rare.

In the past, Wizards released intro (or lite) Commander decks, which had lower power level and lower price. The latest example would be Kaldheim Commander decks.

So, the question is: Are Dominaria United Commander decks intro decks or the full versions?

Since Wizards didn’t make a lite Commander deck since Kaldheim (back in February 2021), it doesn’t look good for the fans of intro Commander decks. Given that there are 10 new cards in each deck, you can expect these decks to be fully powered.

Dominaria United Commander decks release on September 9, 2022. You might notice that this is the same date, as the main set’s paper release. You can, however, already preorder the decks on Amazon.

If you’re wondering about the Dominaria United Commander decklists, we’re getting them earlier than usual. On Friday, August 19th, you’ll be able to find both of them here, so make sure to check back very soon.

Five colors are a rare sight in Commander precons, so this deck is going to be something special. Based on the previous releases, this deck might be very popular and sought-after. One problem it could encounter is that its mana base will need an upgrade, as it’s very hard to pull a good five color mana base in a moderately priced precon.

Five mana is the lowest cost that a five mana commander can have, so that’s pretty good! (Of course, if you don’t count on weird shenanigans with hybrid mana.)

His first (+1) ability is OK, but nothing spectacular. 3/3 token usually won’t matter much, but the cool fact is that it’s all colors, which can be useful.

One interaction already comes up with the second (-3) ability. You can use it to make your Kavu token into an 8/8, plus get some counters on another creature as well. Potentially, this ability could give you ten +1/+1 counters at once, but you’ll need to build around it.

The ultimate ability (-6) is somewhat underwhelming. Sure, you need to plus Jared just once, and you’re ready for the ultimate, but still. You essentially get to draw two cards and create two Treasure tokens – but you still need to work for that.

All things considered, Jared asks a lot of you, but doesn’t quite deliver. It’s best for casual play groups with lower power level. It proposes a nice deck building challenge, though. Furthermore, you’ll rarely be the one of the big targets on the table, thanks to a not so strong commander. So, Jared is an enjoyable Commander for non-competitive players who want to build a 5-color matters deck.

So who’s the character behind the main commander of the new five color precon?

Jared Carthalion is a member of the Cathalion house – that’s a family, which has a long history on Dominaria. They are your usual morally gray characters, as they tend to walk a fine line between good and evil. Things don’t often go their way, and you could say that unluckiness runs in the family.

That was certainly the case with Jared, who had a lot of troubles in his adventurous life. When he was young, his father sacrificed his mother, in order to protect Dominaria from the terrible prophecy. This whole ordeal turned out to be for naught.

In his life, Jared fought (more or less successfully) many battles, and once he even stole the Black Lotus. In one of his battles, his spark ignited, and he was able to planeswalk away from danger, saving both himself and his partner Kristina from certain death.

His previous card was in White-Red-Green colors, and featured the Monarch mechanic. It’ll be interesting to see how his card will change now that he also got Blue and Black added to the mix. A five-color Commander usually do something that represents all five colors of Magic.

*These are brand-new cards that come in the Painbow deck. Since they haven’t been added to the database yet, you can view them below.

As the name suggests, we’ll see a legendary-matters theme. This fits perfectly in Dominaria, which is known for its synergies with legendaries. That’s not about to change, since it was confirmed that all Dominaria United boosters will contain at least one legendary creature.

The White-Red-Black color combination is very popular in Commander, as there are many powerful Mardu commanders. If you’ll take a look at Dihada, you’ll probably agree that it might be time to add yet another one to that list.

Dihada costs four mana, which is very reasonable for a 3-color planeswalker Commander with five loyalty.

Her first (+2) ability can be useful, but you’ll need a legendary creature in play. Of course, you can also use it on an opponent’s creature, if that comes in handy. If your playgroup is fond of politics, it’s certainly handy.

The second (-3) ability provides some serious ramp, and card advantage.

Finally, the ultimate (-11) is just spectacular. You gain control of all nonland permanents until end of turn. You’ve read that right – your opponents will end up with just lands on the battlefield. Sure, they’ll get back their stuff at the end of turn, but in most games, that end of turn will never come – you’ll just win before that.

It will take a long time to get to that ability, but hey, when it does happen, it’s going to be really special.

All things considered, Dihada can be a very fun build-around commander, who doesn’t lack in power. She isn’t broken by any means, but you can certainly win games with her at the helm.

Geyadrone was a powerful and ancient demonic plansewalker. She first appeared on – you guessed it – Dominaria. That happened sometime between the fall of the Thran and the Brothers’ War. This makes her a perfect character to make a return with a new card, as the set after Dominaria United is actually Brothers’ War.

Her goal was to bring some of the most powerful beings (such as the Elder Dragons) under her control. She also finds beings with great potential and molds them to best fit her needs. One such example would be Dakkon, Shadow Slayer. You can see that the legendary theme fits her lore perfectly.

She also had some dealings with the Carthalion family, which ties her to the other Dominaria United Commander precon. We even got some additional lore about these characters in the story The Education of Ulf.

*These are brand-new cards that come in the Legends’ Legacy deck. Since they haven’t been added to the database yet, you can view them below.

In this section, we’ll answer some of the most common question about the Dominaria United Commander decks. If you don’t find what you’re looking for, leave a comment below, and we’ll get back to you as fast as we can.

Are Dominaria United decks balanced against each other?

While we can’t answer this with a 100% certainty, it’s very likely that they will be. Whenever Wizards release multiple precons at once, they always try to balance them against one another. They are mostly successful, and even when they aren’t entirely, the variance of Commander makes it possible to win with any of them.

Can Dominaria United decks function as a self-contained game?

Yes, they can, but only for two players. If you want to have something for more players, we’d recommend that you get the five New Capenna Commander decks, which you can use as a board game for up to five players.

Do Dominaria United Commander decks come with a booster?

Yes, they do. Each Dominaria United Commander deck comes with a Sample Collector Booster, which contains two cards (with alternate art or in foil).

In the meantime, you might enjoy some of the following articles:

Until next time, have fun, and may the Dominaria United Commander decks contain cards that you didn’t even know you wanted.