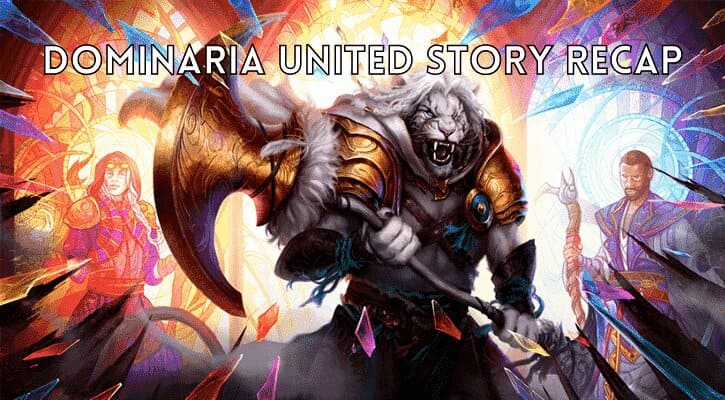 We’ll also provide links to the original story, written by the amazing Langley Hyde. When you do have the time to check the full story, we’d recommend you do so – you won’t be disappointed.

Currently, the full story hasn’t been posted. We only have the first three episodes, for which you’ll find the recaps below. We expect the story to continue on Monday, August 15th, so make sure to check back then to find out more.

Full Story: Echoes in the Dark

We find [/c]Karn, the Great Creator[/c] in Caves of Koilos, where he’s working with his excavator machines in order to find the secret to operating Sylex, before Phyrexians would. Karn feels Phyrexians already being on Dominaria, although his friend Jhoira doesn’t believe him. He works alone, as he doesn’t want to involve others – he fears losing them, as he lost [/c]Venser, the Soujourner[/c].

One of his excavators find an artificer’s room (which was probably used as a prison as well). Inside, he finds a tablet, which he thinks could help him decipher the secret behind Sylex. When he brings it outside, to use it together with Sylex, he finds out that the tablet has a piece missing, so he returns to the cavern.

There he sees that another one of his excavators broke into another room, in which to his dismay finds a Phyrexian oil. When he explores the tunnel further, he meets two acolytes from the Society of Mishra, which attack him. Karn defeats and binds them. One of them tells Karn, that The Whispering One has a plan for him.

Karn proceeds with his journey deeper in the caves. There he finds Phyrexian staging ground, where humans are being compleated (turned into Phyrexians). He sees Sheoldred, Whispering One being assembled by Rona, Disciple of Gix. Sheoldred was damaged when she traveled in the Blind Eternities in a Phyrexian portal ship.

Karn decides to act quickly and to destroy Sheoldred, before she would regain her physical form. He fights multiple disciples, including Rona, but he doesn’t kill her. She is then able to immobilize Karn, just before he would be able to kill Sheoldred.

Sheoldred now becomes aware of Karn and talks to him about how Phyrexians already infiltrated Dominaria with their spies. Persons could act and look normally, although they were already compleated. Rona, Sheoldred and other Phyrexians, leave the cavern in order to go to one of their man other staging grounds.

Before they leave, Rona makes the cavern collapse, and leaves Karn trapped. He’s unable to planeswalk away, because of the ancient interplanar and Phyrexian technology.

Full Story: Sand in the Hourglass

After a few months, Ajani Goldmane digs out Karn, and finds out what happened. Ajani tells Karn about the peace talks between Keld (led by [/c]Radha, Heart of Keld[/c]) and New Benalia (led by Aron Capashen). They decide to go join them and ask for help.

Jodah, Archmage Eternal and Jaya Ballard are also present at the peace treaty. Karn can’t convince them to help him. The main reason being, that they don’t know where the Phyrexians could be, so the most important thing to do now, is to make sure that they secure peace between Keld and New Benalia.

Afterwards, he returns to the peace summit, where they almost sign the peace treaty. However, Teferi, Hero of Dominaria makes an untimely entry and informs everyone that Phyrexians have invaded. Therefore, Radha and Aron don’t sign the treaty, as they decide it is better to look after their own.

Ajani, Teferi, and Karn talk, and Karn Ajani finds out that Tamiyo has been compleated. (Tamiyo Compleated Sage)

Karn, Jhoira, Ajani and Teferi discuss their plans. Karn tries to kill a suspicious looking bird, which turns out to be compleated. The cables shot out of it and attack Karn. The planeswalker team manages to trap the bird into a cage.

They present it to the peace summit, where negotiations are still going on. When they do so, some of the Benalish knights reveal themselves as Phyrexian agents, and start attacking others. A battle follows, and when the planeswalkers manage to get an upper hand, Phyrexians escape, taking Aron with them by force. Only Ajani is able to follow them.

Jodah opens a portal, and at the Stenn’s suggestion transports the team to New Argive’s watchtower. There they find out that one of Phyrexian’s agents followed them. So they lock down the tower in which they are, in order to find the spy.

Karn, Jaya, Jodah, Teferi and Stenn are now locked in the tower. They try to find out where the Phyrexian creature is hidden.

When they encounter it for the first time, it attacks Jodah. When Jaya tries to burn it, it splits into two slime halves. It repeats that multiple types, while they’re trying to destroy it. Finally, Karn manages to destroy one of them, while Jaya burns a whole bunch, others escape.

From the remains of the one Karn killed, Jodah makes a compass-like-object, which points to where the creatures are. When needles of the compass point in different directions, they think it’s broken. However, they soon learn that the creatures are all around them, moving in vents.

The team fights multiple times against these Phyrexian creatures, and they take some wounds while doing so. Meanwhile, Karn gets one-on-one time with most of them, and gives them false information about the Sylex’s location:

Lastly, Karn talks to Stenn, and informs him that Sylex is concealed in the ruins of Trokair, on Sarpadia. At this, Stenn says, with a whispering voice: “That’s all I needed.” He transforms into an object, similar to antenna, apparently in order to give this information to Sheoldred.

Others try to stop him, but he fights back with bloody wires that are now sticking out of his body. They manage to destroy it, and Karn calls Shanna, and her Weatherlight crew, to come help them deal with the Phyrexian invasion.

Argivia is done for, due to Phyrexians. Teferi, Jaya, Jodah and Karn are pulled on Weatherlight. Karn decides that they should lure Phyrexians into open warfare with the Sylex, the Mana Rig and Karn himself. The team splits and they go each on their own journey to gather allies.

Jaya goes to Danitha (Aron’s daughter) for help. There she finds Ajani, unharmed, who wasn’t able to rescue Aron. Danitha promises them to fight on their side, but they first must save her father.

They reach the Phyrexian’s lair (it’s inside a cave), and prepare for attack. Ajani has the force of Llanoward scounts with him, and Danitha has her Benalish army. Jaya smokes out Ben the creatures in the cave, who attack them in response. Benalish attack first, but are quickly overwhelm, so Ajani and scouts join the combat as well.

Ertai the Corrupted shows himself. He’s been reanimated by Phyrexians. Aron also reappears alongside him. He has been compleated.

Ertai commands Aron to fight Danitha. While they fight, Aron tries to resist, and asks Danitha to kill him, and she obeys him.

A Phyrexian Dreadnought appears. The heroes are clearly losing. Ertai asks Jaya and Ajani to give up before Dreadnaught eradicates everyone. While planeswalker are thinking about it, Radha comes with reinforcements on the Golden Argosy. They attack Dreadnaught, and with the remaining army manage to defeat it.

Jodah goes to Yavimaya, and asks Meria for the help of elves. She refuses.

Soon afterwards Phyrexians attack Yavimaya. They are led by Dragon Engine driven by Rona. It destroys everything in front of it. It uproots trees, but also incidentally reveals old artifacts of Thran, which were buried underground.

Meria recognizes one of them them, and uses it to make a spherical vacuum. Jodah uses a portal to usher everyone to safety, and a big explosion takes care of the Dragon Engine. Rona survives.

Meira promises her help and the help of the elves to Jodah.

Full Story: A Whisper in the Wind

That’s it for the Dominaria United Story recap – at least for now. Come back soon to find out more about the story. Meanwhile, you can check the following articles: