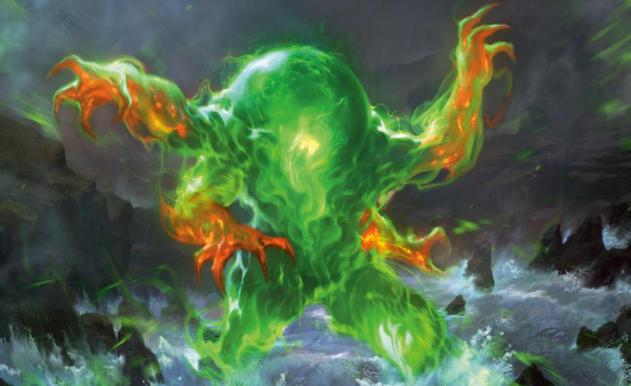 Fires of Invention is one of the best cards in standard right now. A number of different strategies utilize its power to potentially triple your available mana. The current most popular iteration is in the Blue/White/Red colors (Jeskai). However, I don’t think we’ve seen the best the card can offer yet. That’s why I want to offer a new take on a deck that still utilizes Fires of Invention.

Let’s take a look at the ins and outs about a new deck I’ve been playing in Throne of Eldraine standard: Fire Elementals.

The deck is a combination of a tribal Elementals synergies and the engine of Fires of Invention.

The deck has been very impressive for me on the Magic Arena ladder. In just a couple days into the new season I’m into the Diamond ranks playing only this deck. Let’s take a look at how I arrived at this deck, and what questions we have to ask ourselves when brewing a new deck around a card like Fires of Invention.

At my core, I’m a brewer. I love to build new decks, and I rarely play the most popular ones. Brewing is what keeps me coming back to Magic.

So today we’re going to explore Fire Elementals origins and reasons why you might want to brew a derivative of an already strong and established deck.

The idea for this deck came from playing a popular Jeskai version of a deck featuring Fires of Invention. It’s a heavy hitting midrange style deck that aims to contain the board long enough to play multiple 5-drop creatures like Cavalier of Flame and Kenrith, the Returned King by means of Fires of Invention.

What makes that deck so effective is its ability to maximize the power of Fires of Invention. Fires has the ability to essentially triple your available mana: you can play two spells for free, and you can still use those lands for activated abilities. The downside is that you can only cast spells during your turn and you can’t play more than two spells each turn. It’s not a significant downside, but rather more of a deckbuilding constraint.

My problem with that deck was that it was too reliant on actually drawing the card, Fires of Invention. Jeskai spends a lot of time and resources digging for Fires, and if you didn’t draw your namesake card you have a lot of clunky and mediocre turns.

That’s not my thing, and I wanted more consistency. I wanted to brew something more proactive that was still viable to win without drawing Fires of Invention.

The Best Fire Starter There is

The first question you have to ask yourself with a new deck is about winning the game. Identify what is your most powerful card/s that you want to see in every game, and how those cards translate to wins.

Fires of Invention is the powerful card to break since it offers such a high efficiency out of your lands. For brewing this deck I asked, “what’s the best thing I can do when I untap with Fires of Invention?”

Similar to Jeskai, playing two 5-drops including Cavalier of Flame is such an incredible burst of power after dropping Fires. Effectively using up to fifteen mana for 2 five-drops and multiple ability activations makes the Cavaliers the current best choice to keep paired with it.

The next question I had was, “What is the strongest thing I can do the same turn I play Fires?” (In other words, what is a great 4-drop to pair with Fires?)

This was a harder question to answer outright, since there are so many options of 4 mana card possibilities. I realized the only constraints that Fires of Invention and Cavalier of Flame have together are that you’re definitely going to use the color Red and you probably don’t want counterspells. Past that, it’s pretty flexible.

So I needed more direction.

This led me to ask myself, “Okay, what other things can I be doing with the Cavaliers and Fires shell? Also, how can I more reliably draw Fires while also being less reliant on it?”

This is where I used the filters in MtG Arena to filter to only the four mana cards, and Omnath, Locus of the Roil caught my attention.

The Cavaliers are all Elementals, right? What if we just merged the Elemental tribe including the Cavaliers into Fires of Invention? We have access to more value based cards via Omnath and Risen Reef, so they’re kinda a great pairing, right?

Time to Fight Fire with Fire

At this point, I was down the rabbit hole. Let’s use Fires of Inventions along with it’s best finishers with other Elementals. This gives us for a less dependent Fires deck using tribal synergy of Elementals.

The general gameplan of the Fire Elementals is to create high velocity turns with one of your engines. The deck has three different engine cards to help generate value to get to your threats. Having any of these engines online for longer than a turn is very advantageous and it’s often difficult for your opponent to overcome.

This version of a Fires deck is less reliant on actually having Fires, but has access to the same bursty aggressive turns with Cavaliers when you do.

The deck has 3 broad types of spells that comprise its construction: Ramp/Value spells, Engines, and Threats.

The two most obvious ramp cards are Leafkin Druid and Growth Spiral. The deck almost always wants to start with one of these two in hand, or it’s worth considering a mulligan. It’s often desirable to have a Temple land to Scry on your first turn, helping to smooth any possible bumps in the road of your early turns. (Though, having Risen Reef as your first spell would be enough to want to usually keep.)

Cloudkin Seer acts as a way to smooth your actions, and is a sort of hand-ramp in this way. It benefits from all the Elemental effects, while being able to dig deeper in the deck for an important land or spell. Notably, the flying ability is really strong in the meta right now, too.

There are 2 primary engine cards in the deck. Risen Reef is an elemental synergy card that helps us ramp and draw cards. Fires of Invention is another engine that helps us no longer have to spend mana, and creates powerful turns involving Cavaliers. Omnath, Locus of the Roil acts as a sort of secondary engine where your lands pump up your creatures and eventually turn into extra cards.

I didn’t expect to be so pleased to play a non-4-drop on my Fires turn. I hoped to play Omnath on the turn I resolved Fires of Invention. However it turns out that cheaper spells such as Risen Reef are also an insanely strong play on the same turn.

Many cards in the deck can be counted as a threat, however the Cavaliers and Chandra are the big payoffs for the deck. Cavalier of Flame giving your creatures haste and extra power is the reason we play this deck. It finishes games quickly. Cavalier of Gales helps gain value while presenting a substantial threat.

Chandra, Awakened Inferno is a really versatile card. It’s hardly ever bad in a matchup. Sweeper effects are great right now to clean up opponent’s boards since there are lots of ramp creatures running around. Pinpoint removal that exiles is important since it actually hits opponents Cavaliers. Both red and blue cavalier have 5 toughness. Playing Chandra and killing one leaves Chandra on the board. Lastly, it can’t be countered, which is more relevant than ever given the increase in countermagic now that Veil of Summer is banned.

Sit Back and Watch it Burn: Fire Elementals Tips and Tricks

If you’re considering other cards, I’ve tested a bunch of them on the way to this iteration of the deck. My opinions on some common ones are below. They’re all viable options, I’ve just chosen something else instead because I believe it to be superior in competitive circumstances. If you’d like to try them in your version of the deck, you should absolutely try them out.

At three mana, Chandra used to occupy the 3-mana planeswalker spot in this deck before I eventually leaned towards Mu Yanling, Sky Dancer. Chandra thrives when it has good flashback targets or when the additional attackers are threatening. In this deck we have hardly any spells to flashback. We aren’t particularly interested in the two temporary 1/1’s, since they get blocked easily. Sure, they’re great with Risen Reef out, but it’s not enough.

Cavalier of Thorns is the other on-color Cavalier we could play. However, it doesn’t offer us as much as Gales does. Gales is better offensively through means of Flying, and still has a value generating component.

Another flexible three mana option, Living Twister was in early iterations of the deck over Cloudkin Seer. Having a big body to combat aggressive decks paired with abilities to use extra lands after having Fires of Invention were seemingly nice effects. In practice it was often difficult to cast, aggressive decks were rare, and the number of times I wanted to throw a land for damage were few. Mu Yanling, Omnath, and Chandra, Awakened Inferno help reassure our aggro matchups anyways.

I tried using Chandra’s Embercat as a substitute for Growth Spiral for a while. As much as I wanted it to be amazing, it wasn’t. It doesn’t help you cast Fires of Invention, and it often gets hit by a stray Stomp from Bonecrusher Giant. It also can’t help you activate Cavalier of Flame.

Other two drops including Creeping Trailblazer, Lightning Stormkin, or Thunderkin Awakener: All of these other two drops actually conflict with the overall goal of the deck. The best of would be the Trailblazer as a 2-of. Activated abilities like that synergize with Fires. The other two offer more of an aggressive slant to the deck. That seemed to conflict with the value-oriented game the deck plays translating into an explosive turn.

Overall, the deck has been extremely fun to pilot and has performed well. I look forward to refining it as much as I can over the season. For any updates I make to the Fire Elementals including possible sideboard tips, feel free to follow me on twitter @JW_Chief. You’ll find I often tweet out decklists of mine. (Also if you happened to recognize where all the big-bolded headers used in this article are from, kudos to you and your MTG Arena knowledge!)