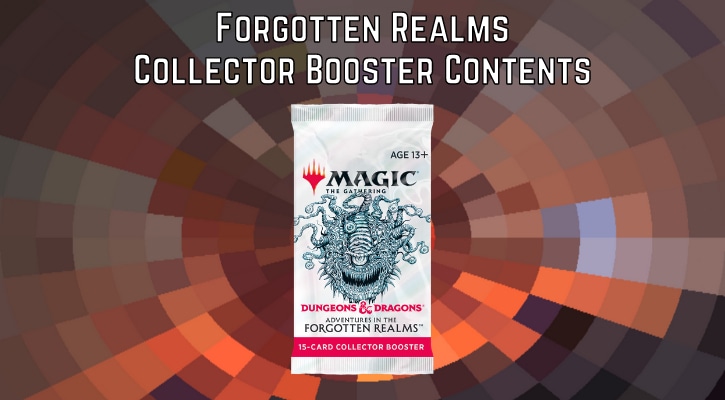 This way, you’ll be able to see what you could get. As it turns out, you’ll be getting a ton of foils, cards with alternate art and special frames. At the end of the article, we’ll also discuss if Forgotten Realms Collector Boosters are worth it.

You’ll usually get a mix of all different styles. Here’s a more in-depth breakdown for each slot in the Forgotten Realms Collector Booster:

Where to Get Forgotten Realms Collector Booster?

You’ll usually be able to get AFR Collector Booster in your local game stores. Sometimes they might even be available at the big retail stores like Walmart. Additionally, you can also order them on Amazon, and avoid the hassle of trying to find them at a store.

If you’re planning on buying multiples, it might be better if you get a whole booster box. This way, you’ll usually get more bang for your buck.

There will be four different special styles of cards in the Forgotten Realms Collector Booster:

Additionally, you can also get a regular version of a card – but in foil. Let’s take a closer look at the four special versions.

These are perhaps the weirdest looking cards that ever appeared in a Collector Booster. If you aren’t the most enfranchised DND player, you might be wondering what’s even going on.

This style is reminiscent of the classic DND Modules (DND adventures from 1st and 2nd edition). A bunch of text that’s featured on them isn’t even relevant to your regular Magic the Gathering game. Dungeon Module C7 is just a reference for DND fans to enjoy and doesn’t mean anything in MTG. The card you see above is your regular Evolving Wilds, just with an alternate artwork and frame.

There will be 9 different Classic DND Module cards, each featuring a land card. No need to be worried about legality. You can play Module cards in whatever format they are legal in.

You can find all MTG DND Module cards here.

While the frame might seem bland to some, DND fans will probably quickly recognize a reference to the DND Sourcebook / Rulebook.

There will be 51 cards with the Rulebook styles, each one featuring an iconic monster or a legendary character. In this way, these will probably be great for Commander players.

Besides the two new styles, we’re also getting a couple that you might know from the previous Collector Booster Boxes.

First one is the Borderless treatment. Below you can see Lolth, Spider Queen, and you can quickly spot the difference between the regular version and the borderless one.

So, there are three main differences:

All of this makes for a really spectacular card. Here’s a couple more:

Extended art can look quite similar to the borderless versions at first sight. However, the artwork extends just to the left and right border – it doesn’t go all the way to the top. The artwork is same as the regular version on the card, which is another difference from the borderless cards.

Once again both the reminder text and the flavor text is removed, which makes for a much clearer text box, as can be seen above.

Is Forgotten Realms Collector Booster Worth It?

As usually, with questions like this, the answer is – it depends. Forgotten Realms Collector Booster is worth it for some players, but maybe not for others. Let’s see on which factors this depends.

Forgotten Realms Collector Booster isn’t worth it, if you:

Forgotten Realms Collector Booster is worth it, if you:

If you’re planning to purchase multiple Forgotten Realms Collector Boosters, just keep in mind that it’s usually better value to get a whole booster box instead of twelve separate boosters. Usually, you’ll get one or two boosters more for the same price.

That’s all about Forgotten Realms Collector Booster contents. If you have any additional questions, let us know in the comments below. We’ll get back to you as soon as possible.

Until next time, have fun, and may your Collector Boosters contain your favorite DND characters!