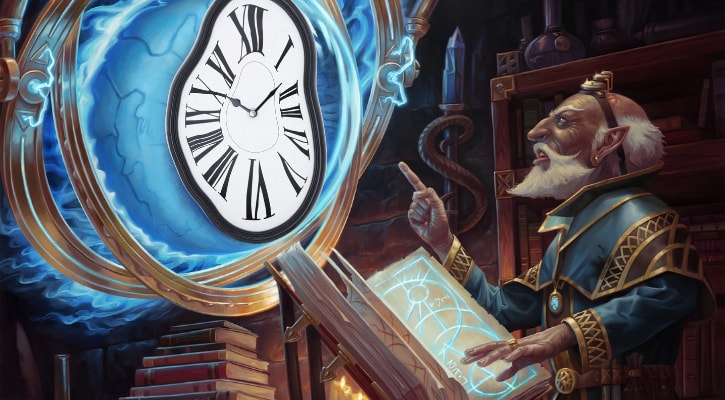 Maintenance will start on July, 8th at approximately 8 a.m. PT (15:00 UTC). These usually take around three hours – or a bit more, if something goes wrong. Sometimes we get lucky, and we get the set early. You can find more about the update below.

UPDATE: If you’re looking for the information about the newest release, you can check when does Midnight Hunt release on Arena.

With that information, let’s count down to Forgotten Realms release:

You can also check the approximate time of Adventures in the Forgotten Realms release, based on your time zone, in the following table:

Update might be problematic, so if Arena doesn’t start as expected, make sure to check Wizards Customer Support’s Twitter for more info. They’ll tweet once the maintenance starts, and once it is finished. There you’ll also be able to find out about any possible delays.

You can also check MTG Arena Status Page. Game, Matches and Logins systems all have to be operational before you can run Arena without problems. No downtime is expected, but you’ll have to restart the client to get the Forgotten Realms patch.

If you can’t wait for Forgotten Realms release, here are some interesting things to check meanwhile. They are called Forgotten, and not Boring Realms, after all.

Are you planning on drafting this set? Then you should definitely read our Forgotten Realms Draft Guide. You’ll quickly get up to speed with the format, which will help you win more games and earn more Packs.

You can already take a look at the currently known Forgotten Realms spoilers here. There are plenty of exciting cards there.

Of course, the image above is just a placeholder, you won’t be getting black deck boxes with coming soon written on them.

If these aren’t that exciting to you, and you only play MTG on Arena, you’ll be happy to learn about this next thing.

As always, you can expect a new code for 3 Forgotten Realms booster packs. You’ll be able to find it and all other MTG Arena codes here. The code should be available once the maintenance is completed.

Once Adventures of the Forgotten Realms go live on Arena, you’ll be able to draft the set in a Premier or Traditional Draft. There will also be a Traditional Sealed and Best-of-one Sealed options. Additionally, you can find more upcoming events in the Arena Event Schedule.

If you were looking forward to the Early Access Streamer Event, we’ve got some bad news. The event was cancelled with Strixhaven, and it doesn’t look like it’s coming back. This means, you’ll be able to watch your favorite streamers play Forgotten Realms, only after the update goes live for everyone.

That’s all about the Forgotten Realms release time on Arena. Hopefully, the wait wasn’t too long. If you don’t want to miss more strategy content, Magic news, new Arena codes and MTG memes, you should follow us on Instagram or Facebook.

Until next time, explore the Realms and have a ton of fun!