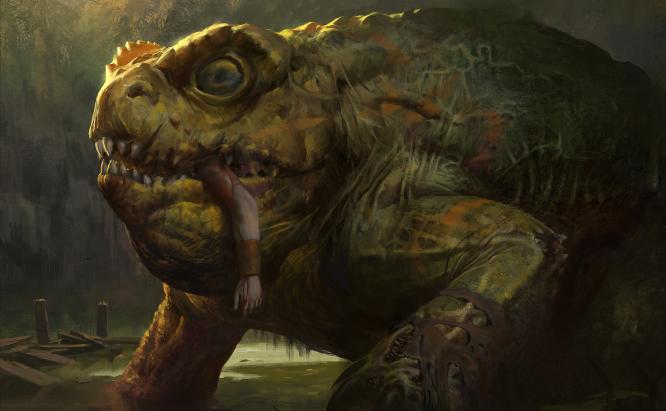 The baddest of the frogs, the one, the only, The Gitrog Monster has come to Brawl on MTG Arena. Today we’re sharing our take on this black-green commander. We talk about some of the key cards bellow, but first, here’s the decklist.

You can easily export it to Arena by clicking the button in the top right corner.

In Commander there’s an infinite combo with The Gitrog Monster, Dakmor Salvage and a discard outlet. You can basically draw your whole deck, but this doesn’t apply here, since Dakmor Salvage isn’t legal in Brawl.

We don’t have any infinite combos with the frog in Brawl. That means we want to build a very good midrange deck, packed with value and small synergies. We won’t play bad cards, just because they do something with The Gitrog Monster in play. On the other hand we will play cards that were just missing a little something to be playable – like Elvish Reclaimer.

We grouped cards in the following categories:

Let’s take a look at them and how they relate to our commander.

You might have noticed that the decklist doesn’t include Witch’s Cottage and Gingerbread Cabin. While these seem like an auto-include at first, the truth is that we only have 7 Forests, 7 Swamps and an Overgrown Tomb. This means that Cottage and Cabin will most often do nothing and enter the battlefield tapped and throw us off-curve. That’s why we decided to cut them.

We have some lands that can sacrifice themselves:

All of those work great with The Gitrog Monster in play. If you don’t need mana right away, don’t use Fabled Passage until you get the frog in play to immediately draw a card.

Synergies with The Gitrog Monster

Let’s take a look at what synergies does The Gitrog Monster offer us in Brawl. We should be focused on self-mill and sacrificing lands.

If you’re a newer player you might not know what milling is. It’s putting cards form a library to the graveyard. When you do it to yourself, it’s called self-mill. The name comes from an old card Millstone, which used to be a win condition in 1994.

Anyways, back to the present. We have a small self-mill theme with:

Milling allows us to draw cards with our commander. The Gitrog Monster doesn’t care where the lands were, before they went to the graveyard. However if you mill multiple lands in one go, you only draw one card with the frog.

Besides some lands, that can sacrifice themselves, there are other ways to do so with:

Elvish Reclaimer is really good fit in the deck, because he can get us the utility land we need. If we have him in play with The Gitrog Monster, we can sacrifice a land, search for Lotus Field and draw two cards in the process.

Bontu is also pretty strong allowing us to sacrifice stuff we don’t need, including lands. And he’ll always come back if he gets killed.

Forget the synergies, some cards are just too good to not play them. This is especially true in Brawl where your card pool is limited. We have planeswalkers for value and lots of removal spells.

As mentioned Vraska’s +2 actually has some synergy with Gitrog, because you can sacrifice a land to draw two cards. If you want to remove a walker, you can cut Garruk, since he’s probably the weakest of the bunch,

Four out of five planeswalkers work as removal spells. But that’s far from all. Black-green has some great options and we’ll take advantage of them, so we basically have an answer to everything.

We can even get rid of Gods with Eat to Extinction, or with anything else, really – with the help of Shadowspear.

Speaking of black-green removal spells, a big shout-out to Casualties of War which is probably one of the best spells you can cast in Brawl, often giving you a five-for-one.

If you’re encountering a lot of aggressive decks with many smaller creatures, you might want to find some space for Ritual of Soot. It is frequently a game ending spell against those type of decks.

Almost every deck in Brawl needs ramp (exception being the most aggressive decks). In general we prefer cards that get lands into play, instead of just ramping us, to help us with The Gitrog Monster. We have

However, all of these cards cost at least three mana. That’s why we need to have some cheaper ramp cards, even thought they don’t provide lands:

That’s all for today, folks. What changes would you make to this deck? Tell us in the comments bellow. You can also share your decklist for other players to try.

If you’re new to the game you can learn more about Brawl here. Make sure to check if you used all codes for free stuff on MTG Arena.

Last but not least we have one final bit of information to share with you. Do you know which kind of shoes does The Gitrog Monster wear? Open-toad sandals.